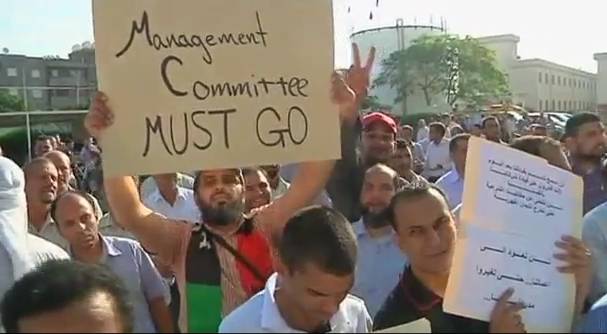 Workers at Waha Oil company have been on strike and holding protests for 7 weeks now. Their main demand is the purge of the top management of the company from directors whom they accuse of being stooges of the old regime. It is an example of class issues coming to the fore once the old regime has been put to one side.

Field workers say they have documental evidence that Waha Oil directors collaborated with Gaddafi’s troops by giving them food, shelter and equipment worth millions. Workers have vowed never to work for them again. “This management committee gave 60 four-wheel drive land cruisers to [ousted leader Moammar] Qaddafi's forces in March. These cars helped the Qaddafi forces kill some Libyan people and commit other crimes,” said Riad, an organization supervisor and he added: “We are demanding that the management committee of Waha quit... After the February 17 revolution, we want to get rid of these figures of corruption.”

Waha Oil is a joint venture with American firms ConocoPhillips, Marathon and Amerada Hess, and before the civil war produced around a quarter of Libya’s oil, equivalent to around 400,000 barrels per day.

The Waha Oil workers have demonstrated noisily for weeks outside the office of the new head of the National Oil Corporation, Berouin. They also took direct action and forcibly ejected their managers from the company headquarters. (see VIDEO)

Finally, late last week workers and sources at the state National Oil Corporation (NOC) said the company's chairman Bashir Alashhab and his deputy would be replaced. But it seems that the NTC “prime minister” blocked the agreement: “The Prime Minister Mahmoud Jibril stopped the agreement because he said it was not the time for change,” said Haithem Etarhouni, a representative of the striking workers.

Waha Oil Company plant When the workers were informed on Tuesday, October 18, they decided to resume their strike action. “The chairman and members must go immediately, and not wait another minute,” said Widad El Said, a secretary at the company who took part in one of the protests. Workers feared a deal was being made behind their backs. They said they believed Alashab was inside the ministry in a closed meeting with the head of the NOC and the oil and finance minister, the liberal exiled professor of economics Tarhouni.

The strike and demonstrations have not been limited to Waha Oil workers but have also involved other oil companies. Workers at the Libyan Petroleum Institute, who also said their managers had actively supported Gaddafi’s army, joined them outside the NOC head office. Workers from NOC itself and from other subsidiaries have also become involved in the protest movement. Maged El-Arbed, a protester who works for Libya's state National Oil Co., said the demonstrators are seeking the dismissal of NOC and other oil industry managers accused of corruption and supporting Gaddafi's regime. Pressure from the workers has already led to the dismissal of the chairman of the Sirte Oil Company.

It is clear that the Libyan revolution has emboldened the workers, giving them a new feeling of confidence. “This is a new era, a new revolution. We paid a lot of blood. We are looking for a huge change,” said Haifa Mohammed, a female worker from NOC’s sustainable development department. Their expectations are already starting to clash with the leadership of the National Transitional Council. “We expected this change to happen. But what we are seeing is the old people are still there, the bad people, the managers. The new people they brought are not good enough," said one of the protestors.

Waha Oil workers demonstration Interestingly, some of the workers have drawn the conclusion that they do not need managers to restart operations in the oil fields. “Most of the people that produce the oil are here. We can do without them, the managers. We can start from tomorrow if we can have enough transport, equipment, tools and materials,” said Abdullatif Hetwash, an engineer who has worked for Waha Oil for 36 years.

The authorities of the NTC do not seem very keen on workers’ protests. At an earlier demonstration on September 26, Adel Tahar Assed, an assistant driller at a NOC subsidiary, said he had been arrested earlier in the day by the revolutionary fighters who police the area. “I was accused of organizing a mob,” he said.

There are also reports of demonstrations of airline pilots demanding the removal of the Transport Minister. Like in Tunisia first and in Egypt later, the removal of the dictator in Libya could unleash a wave of protests in which workers start to move against their managers. The demand for the removal of the old managers is also linked to other more openly economic demands, like the payment of back wages, etc.

A report in the oil industry website Petroleum Economist warned about the possibility of foreign companies going back to Libya, only to find a militant and assertive working class: “things have changed. Intoxicated by new freedoms, Libyans are intent on exploring them. The NTC, NOC and the other big authorities in free Libya have a job on their hands: to meet unpaid salaries and, to avoid more ferment, satisfy rising expectations from their people. As foreign employers return to the oil sector they, too, should expect to find a more restive, determined and bullish workforce.”

The process of rebuilding of the Libyan workers’ movement will not be an easy one, but the oil workers will certainly have to play a key role in it. This strike on the part of the oil workers and the demands they are raising highlight the contradictions in the situation. The masses have removed the hated dictator. Elements from the old regime are trying to assert their authority over the masses and create the conditions for normal capitalist development. However, the masses, having had a taste of freedom are preparing to use this to push forward their own demands. What is lacking is a working class leadership up to the tasks posed by the situation. The most advanced workers and youth in Libya must come together and begin the task of building such a leadership.