Lal Khan was in Germany recently to present his book, Pakistan‘s Other Story - The 1968-9 Revolution. You can also buy the book online from Wellred Books. 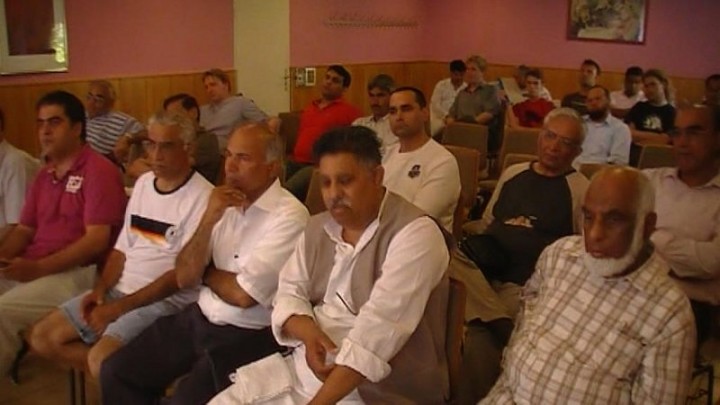 On Sunday, July 11, 45 people attended the German presentation of Lal Khan’s book, Pakistan’s Other Story The 1968-9 Revolution, in Frankfurt. Lal Khan is a leading Pakistani Marxist and has been fighting for decades and under very dangerous conditions for a free workers’ movement and for a genuine socialist democracy on the whole South Asian subcontinent.

The meeting was attended by a large group of emigrant Pakistani, some Germans, including representatives of the “DIE LINKE” party (“The Left Party”), and one person from the United States. Lal Khan spoke about the history of Pakistan as well as the present situation faced by ordinary Pakistani working people. The main topic of his lecture was not Islamic fundamentalism but the origins of the present misery. He stressed the point that his book is written from the perspective of ordinary working people and thus it is definitely not a piece of the officially written history.

He stressed that the present situation in Pakistan is not determined by Islamic fundamentalism. Only a very small minority of the population is hanging on to this ideology. The main problem of the country is the terror of capitalism that is driving ordinary people to desperation and in some cases to suicide as well. The extremely poor and often illiterate population is being threatened by massive inflation for basic goods and daily electricity power cuts in whole cities and regions.

He pointed out that only the organised workers’ movement is able to act against these barbaric living conditions. But the actions of the workers’ movement are limited because of the repression by the local capitalists and landlords as well as by mighty foreign powers. As an example of the repression by imperialist foreign interests Lal Khan mentioned the German chemical company Merck, located in the city of Darmstadt, just a few miles south of Frankfurt, that recently fired striking workers in its factories in Pakistan. Lal Khan urged the workers’ movement and the left in Germany to build up solidarity work on this issue. 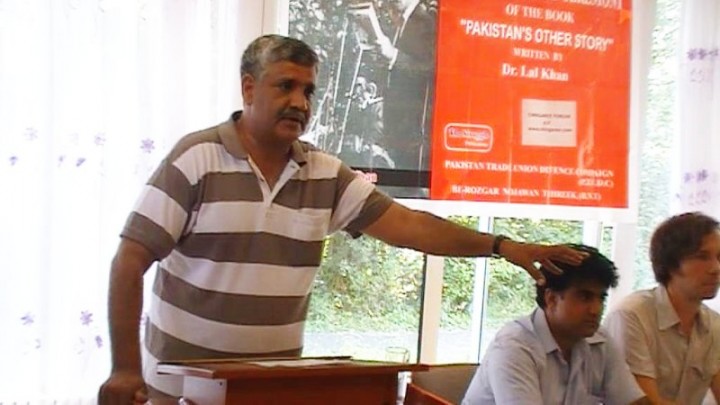 An internal problem for the development of Pakistani society is the fact that army officials are often owners of great tracts of land and also of locally based companies. As a consequence the army has a big influence on the Pakistani economy. This situation was set off long ago by British imperialism. Before the times of the rule of the British Empire, landlordism, or feudalism, was unknown to the Pakistani people. The British introduced this form of property relations with the intention to creating a loyal native upper class that possessed the power to suppress the colonised masses.

However, during the Pakistani Revolution of 1968-9 it was clearly demonstrated that the rule of such an elite and its oppressive state apparatus could have been defeated in a very short time. The final success of the revolution, the conquest of power, was prevented because of the lack of a conscious leadership of the mass insurrection. In collaboration with imperialism the ruling class reacted with the fostering of the might of the generals and the creation of a military dictatorship.

A phenomenon that originated historically and which was also deeply linked to the phenomenon of a degenerated state under the social and political might of the army is the emergence of religious terrorism, of extremist Islamic fundamentalism. This has very little support among the people but it is allowed to act freely and effectively as it serves the purposes of this degenerate state.

After the Afghan Revolution in 1978 the CIA nurtured the awakening of Islamic reaction throughout the whole region with the intention of holding down the rising masses by exploiting religious superstitions and naked fascist violence. Just as today, within the scope of the so-called “War on Terror”, in the 1980s the CIA had used the services of the Pakistani military state apparatus to exchange men, material and information, mainly through the northern Pashtu areas on both sides of the Afghan “boarder”, with their allies in the region.

Since those days important layers of the Pakistani state apparatus have been directly mixed up with the Islamic fundamentalists in both countries. As in the past, today many corrupt civil servants and whole state institutions are making material gains because of their services provided to the US as well as to the religious fascists. Enormous amounts of money, originally dedicated to finance the so-called “War on Terror”, are thus in reality directed into a corrupt state infrastructure and this has been going on for decades because of the cynical role of both US imperialism and Islamic fundamentalism in the region.

This is although the explanation as to why Islamic tendencies have been able to gain a great audience in Pakistan as well as among the worldwide opinion makers – and hugely influence the state of Pakistani society, even though their social influence on the mass of the population is definitely irrelevant. It thus follows that it is a really dangerous illusion to harbour any hope that a way out of the Pakistani misery can be provided by any sectors of the state.

The material and political interests of al-Qaeda, the Merck Company, the Taliban, US imperialism, the local elite and the state-apparatus may be very different. But one thing unites them: their oppressive behaviour and their material interests pit them all against the liberation of the toiling masses in the whole region.

It is the task of the organised workers’ movement, coordinated by a conscious and serious leadership, to end poverty, exploitation, despotism and Islamic reaction once and for all. Christoph Mürdter from the Wiesbaden DIE LINKE, the Offenbach DIE LINKE and Kazmi of the Chingaree Forum all stressed the importance of the lessons of the struggles for social liberation in other parts of the world for the changing of the political situation in Germany. Together with Lal Khan they called for the immediate withdrawal of all imperialist armies from Afghanistan and confirmed their intention to strengthen the consciousness of the common interests of the exploited masses here in Germany and also in Pakistan through concrete solidarity work.