Five years ago Kurmanbek Bakiyev came to power in Kyrgyzstan on the back of the so-called Tulip Revolution, only to slavishly follow the dictates of imperialism and enrich himself and his entourage at the expense of the working people. Now the workers and poor have had enough and have risen up once more. Here Isa Al-Jaza'iri looks at the background to the tumultuous events taking place. 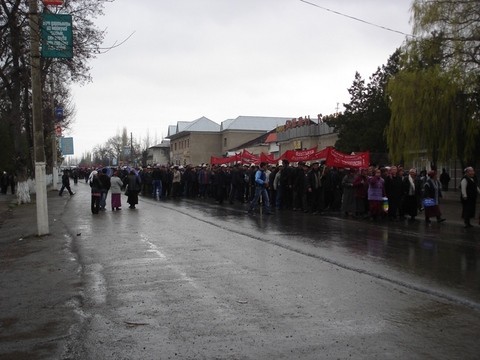 Five years after president Kurmanbek Bakiyev came to power in the "tulip revolution", he has been forced to flee the country on a small plane by mass rioting against rising water and electricity rates. The protests began on Tuesday in small towns in the countryside, and quickly spread to the capital city, Bishkek, where the crowds faced down riot police firing live bullets, overcame them and stormed into parliament. The country is boiling, with crowds raiding armouries and the mansions of the president's family. The economic crisis continues to provoke periodic explosions, and the government of Kyrgyzstan is just the latest to fall in its wake. Neither will it be the last.

Bakiyev's regime was rife with corruption, with top jobs going to his family and cronies. Since coming to power, the president and his family have enriched themselves and grown fat off the backs of the people of Kyrgyzstan, and yet the brunt of the economic crisis was expected to be borne by the masses. Economic growth has been stagnant, and inflation has been galloping. This year, the president introduced massive hikes in prices for electricity and water, and the expectation was that this would go unanswered. How wrong he was. In a country rich in oil resources, the ruling classes played games with American and Russian imperialism, while the masses languished in poverty. Inflation has been a serious problem, deteriorating the already meagre standards of living of the working class in Kyrgyzstan. These rate rises were the final straw.

Welcome to capitalism, would you like unemployment with that?

When the Soviet Union collapsed, Kyrgyzstan was one of the republics to declare independence. The planned economy was abolished, and the country and its industries and resources were opened up to the fluctuations of the market and the predatory machinations of investors and imperialism. In spite of all the hypocritical sermons by bourgeois politicians and analysts, praising the "transition to democracy" and "freedom", in reality the corruption and dictatorship of the ruling clique took on an even more frantic character as they sold the national industries, plundered the country and enriched themselves openly. The result for the masses has been disastrous. An immediate collapse in the economy of the country was the first consequence, followed by a small consumption-based recovery partly as a result of remittances from emigrants back to their families in Kyrgyzstan, 29% of GDP in 2008 ( developmentandtransition.net). And yet, despite continuous growth since 1996, to this day, per-capita GDP is far below the level before the introduction of capitalism.

But since the crisis, the situation has rapidly deteriorated, as the consumption boom has given way to a slump. In 2008, economic growth was at 8.2%, in 2009, at 7.6%. But in 2010, the rate is estimated at -1%. This represents a general collapse (indexmundi.com). This is coupled with inflation rates fluctuating between 10% and 33% percent per year over the past 3 years. Unemployment is at 18% for the third year running, with no signs of improving. Against this backdrop of mass misery, Bakiyev could only maintain his and his family's growing opulence and corruption by increasingly resorting to despotic methods.

Ballot-rigging and crackdowns: capitalist "democracy" in the era of austerity

In July, 2009, Bakiyev used every resource at hand to guarantee victory at the presidential polls. State media openly campaigned for him, opposition and independent outlets were strong-armed, harassed, or closed, and allegations of fraud were rife. Once declared the winner, the president moved to implement general increases in electricity, heating and water rates. Heating costs were to rise by 400%, electricity by 170%, and hot water rates more than doubled. The reasoning given was that the public utilities had deteriorated since the soviet era, and subsidized utilities had to turn a profit in order to invest in upgrades.

Of course, this placed even more burdens on the already hard-pressed workers of Kyrghyzstan. "We can definitely see social tension growing now. It is a gradual psychological process. People will realize [they will have difficulty paying] after getting their bills for the utilities. And when before they used to spend 20-30 percent of their paycheck on payments, now they will have to spend about 80 percent of their salary to pay for the utilities," Bishkek-based political analyst Mars Sariev told EurasiaNet.

The situation for pensioners, even ones receiving a utilities subsidy, was no better: "One Bishkek pensioner told EurasiaNet that, even with his senior citizen discounts, he expects to spend 75 percent of his government allowance on utilities. ‘How will I live on the rest of my pension? I don’t know. There are some other pensioners who get even less than I. I don’t know how they will survive,’ said Victor Kononenko, 73." (eurasianet.org)

But no matter, the government insisted it had no choice but to increase prices. The masses' anger was further stoked by broad knowledge that the electric utilities were in the hands of his family members.

The discontent inexorably led to the explosion this week. The masses had had enough. On Tuesday, April 6th, protests against the price rises broke out in the western town of Talas, where the interior minister attempted to talk the crowds back to their homes, but only succeeded in being beaten half to death. Crowds stormed the government building there, and burned portraits of Bakayev.

The protests then spread quickly across the country, at first in the provincial towns. The government's response was swift, closing down media and arresting opposition leaders in an attempt to stave off the coming tide. But it was in vain. Once the masses have awoken, no amount of repression could stop them. By Wednesday, protests had spread to the capital Bishkek, where police attempted to contain the crowds building up in front of the headquarters of the Social-Democratic Party. The riot police resorted to tear-gas, rubber bullets and flash grenades to prevent the crowd from marching on the interior ministry, parliament and the presidential palace. When it became clear that the demonstrators were undeterred, they fired live rounds, killing 14 and injuring dozens.

This only spurred the movement on, and the angry crowd overtook the police, who can be seen in videos stumbling over each other and jumping over walls in a desperate attempt to escape the beatings of the protesters. 100 protesters were killed over the course of the day, but the crowds were determined. When the means of repression at the service of the minority that control society no longer strike fear into the hearts of the millions whose labour they exploit, the jig is up. When those forces run in fear from the masses, the ruling class is left suspended in mid-air, exposed as a minority without any base of support in society. And then it is only a matter of time. 3000 protesters seized the main government building in Naryn, and threw local governor Almazbek Akmataliyev out. 3000-4000 gathered in the central square in Talas, and crowds attempted to storm the police headquarters. Reports came in of police vans being tipped over and lit on fire. In the capital, swarms seized state media buildings, burned the headquarters of the Prosecutor-General and liberated opposition leaders who had been arrested on Tuesday. Even the headquarters of the much-hated secret police, the National Security Agency, fell into the hands of the opposition. Parliament was seized, followed by the Interior ministry, and finally the Presidential palace itself, where snipers opened fire on the crowd. Then President Abkayev reportedly boarded a small plane and fled to the southern city of Osh.

Opposition leader Rosa Otumbayeva, former foreign minister, has assumed the presidency and has declared that a "people's government" has been formed which will rule for 6 months in preparation for a new constitution and new elections.

No way out under capitalism

The new government will be faced with enormous contradictions. Bakayev made the country an armed camp for competing imperialist powers, with both Russia and the United States having enormous air bases in the country. Manas is the only major air base open to American imperialism in the region, and considering its proximity to Afghanistan, is essential to their ability to operate in that country. The former president played games with the two powers, receiving a $2billion aid deal from Moscow, ordering the removal of the US base to please them, and then allowing the Americans to stay after Obama agreed to pay $60million a year plus huge amounts for fuel and supplies, which was all siphoned through his and his family's businesses. The closing of the air base has been a long-standing opposition demand, but Rosa Otumbayeva has already hinted that it may be allowed to continue. Closing it would be a direct challenge to the interests of American imperialism in the region, so it is likely the new government will come to another "favourable" arrangement instead.

But the issue which looms over this new government is the rate increase. This government was won in the streets by the masses in revolt against the hated increases - while the opposition leaders sat in jail cells. If the increases are not reversed, the masses will have been cheated. But how can the government act differently? The economy has gone over the cliff and the crisis has taken away any room for manoeuvre. The capitalists will be demanding the deepening of austerity measures in order to pay down the national debt, estimated at $3.647 billion, or 74% of the country's GDP (CIA world factbook). Within the bounds of capitalism, there are no other choices.

This is only the first chapter in the Kyrgyz revolution, the masses may wait to see how this government acts for a period, but inevitably, they will demand that their problems be put on the agenda. Considering that one third of the population lives below the poverty line, the attempts to squeeze further will only lead to further explosions. The capitalists have squeezed blood from a rock, how much more can they expect?

For the urgent needs of the masses, the tragic experiment of capitalism in Kyrgyzstan must come to an end. Its crimes have provoked the ire of the Kyrgyz workers and poor. If the new leaders cannot offer them a way out of the crisis and misery, they will rise again. Only a nationalized, democratically planned economy can open the door to a real future for Kyrgyzstan. But for now, the masses have already risen up and shaken society to its roots. Their example will have reverberations in Afghanistan, Pakistan, Uzbekistan, and Iran, where a revolution has already begun. Not one of these regimes is stable, and the revolution will not respect national boundaries. The elimination of capitalism in any one of these countries would be a prelude to a Socialist Federation of Central Asia, uniting the resources of the region, lifting the masses out of poverty and striking a mortal blow against the forces of Taliban and Imperialist reaction in the region.