Dramatic events were witnessed on Wednesday night outside the GLS delivery company in Piacenza, Northern Italy! A 53-year old Egyptian worker, Abd Elsalam Ahmed Eldanf, while manning a picket line was hit by a lorry and killed and, according to witnesses, the managers incited the lorry driver to charge at the pickets. 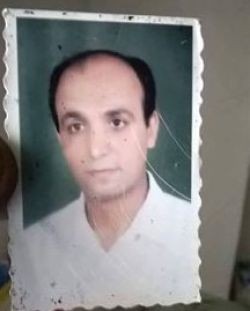 Abd Elsalam Ahmed Eldanf Photo: Dafne AnastasiAll this comes in the context of an ongoing struggle of the workers in the logistics (parcel delivery) sector in Italy. As in all countries, working conditions have been more and more casualised, with workers’ rights being whittled away and many having to work as “self-employed” or even illegally in the black economy.

However, in Italy the logistics workers have been fighting back, having to organise not only against the bosses, but at times even against the official trade unions (CGIL, CISL and UIL) whose leaders have been only too willing to sign away workers’ rights. In this context breakaway, rank and file, unions such as the Sicobas and USB, have organised struggles in an attempt to put a halt to the bosses’ onslaught.

[VIDEO of the protest a few hours before the killing]

In 2014, the official unions had reached an agreement with the bosses of the sector that allowed for greater flexibility of labour. Traditionally in this sector, workers do not work directly for the company but are subcontracted through external cooperatives and smaller companies. One of the demands of the rank and file unions was to end this system and for the workers to be taken on directly by the companies they were actually working for.

At the end of 2014 a number of strikes were organised to back up these demands, but the bosses used delaying tactics to avoid having to enter into serious negotiations. Then there was the sudden strike organised by the GLS warehouse porters in December. They blockaded GLS depots in Rome, Bologna, Piacenza, Verona and Padua. Faced with this determined action of the porters, GLS agreed to a new deal, which improved on the deal signed with the official unions.

One of the demands posed by the workers was that when a new incoming external company is granted a tender to work for such companies as GLS, the incoming company must take on those workers already working there for the previous outgoing company. This was a demand to guarantee this group of workers job stability, and GLS accepted. Within a few weeks, other major logistics companies were forced to accept the same deal, which was signed back in February 2015.

Fast forward to today, and we find GLS management attempting to renege on that deal. They clearly had the idea back in February 2015 that they were making concessions only to get the workers back into work and then prepare to claw back what they had conceded.

On Wednesday, 14th September, representatives of one of the rank and file unions, the USB, were renegotiating with management in a bar outside the GLS depot in the small town of Montale, in the province of Piacenza. They were in a bar because the managers would not allow the union reps into the depot. In the course of the discussions it became clear that the bosses were reneging on everything they had agreed to last year.

Faced with such intransigence, the union reps went out and called on the workers, who were already gathered at the gates of the depot, to stop any trucks going in or out. That is when the dramatic events unfolded.

When the managers saw the picket line made up of around 30 workers, they called on the drivers to force their way through. A driver accelerated into the pickets and hit two of them, dragging one of them for several metres, killing him.

The driver did not even try the usual tactic of slowly moving towards the pickets to see if they would budge; he just charged into them at about 25-30 miles an hour. According to eye-witnesses on the spot, one of the managers was shouting “go on, go on,” inciting the driver to plough into the workers. The brother of the killed worker, Elsayed Eldani, pointed out that, “The GLS depot manager was inciting the truck to run over the workers who had organised a picket line.”

[The brother of Abd Elsalam Ahmed Eldanf explains what happened]

According to the same witnesses, the police who watched the events did nothing to stop this, only intervening to arrest the driver after the event and when he was facing the wrath of the pickets. The State Prosecutor is now claiming that when the incident took place there was no picket and no worker protest taking place. The driver has been released and the whole incident has been declared a “traffic accident”. But videos show that the protest had been going on for hours; one video being taken at least one and a half hours prior to the killing. Several workers have declared what really happened. This was, according to them, cold-blooded murder.

Abd Elsalam Ahmed Eldanf was the father of five children. He himself was not a casual worker, but had a permanent contract. He was fighting for others, so that they too could have some job stability. Now he is dead. But the struggle he was part of continues. The GLS depot in Piacenza remains blockaded by pickets and throughout Italy strike action and protests are being organised in many workplaces by workers of all unions, including the official unions such as the CGIL and even the CISL, particularly the metal workers' unions within these trade union confederations. Tomorrow, Saturday, 17th September, a rally has been organised in Piacenza. 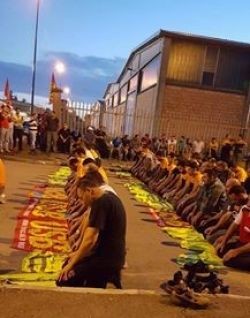 Immigrant workers praying in front of gate where their comrade was killed, with trade union banners draped in front of them. Foto: ContropianoThe tragic death of Abd Elsalam Ahmed Eldanf is an indication of the new situation we have entered, one of bitter class struggle. The bosses are pushing workers in Italy back to the conditions of the 1950s, but there is a limit to what the workers can take and the resistance of the logistics workers is an indication of the changing mood. Abd Elsalam Ahmed Eldanf is dead but he will be present wherever workers stand up for their rights and fight back.

The editorial board of “In Defence of Marxism”, the website of the International Marxist Tendency, expresses its full solidarity with the GLS workers and sends condolences to his family. The SCR [the IMT in Italy] are intervening in tomorrow’s demonstration in Piacenza and yesterday issued an appeal signed by a number of shop stewards in the logistics sector.

[NOTE: GLS, General Logistics Systems B.V. is a joint Dutch-British owned company. It is a subsidiary of Royal Mail.]