Details
In Defence of Marxism
29 August 2008

Share
Tweet
Claudio Bellotti is a leading member of FalceMartello, the Italian section of the International Marxist Tendency. Claudio is also the spokesperson of the Marxist left wing of the Communist Refoundation Party (Rifondazione Comunista). Our interview will be about the intervention of the Italian Marxists in the congress of Rifondazione.

Claudio Bellotti is a leading member of FalceMartello, the Italian section of the International Marxist Tendency. Claudio is also the spokesperson of the Marxist left wing of the Communist Refoundation Party (Rifondazione Comunista) and our interview will be about the intervention of the Italian Marxists in the congress of Rifondazione that ended last Sunday-27 July 2008. In order to understand the latest events, it is necessary to remember what happened to the Italian Left in the last general elections... 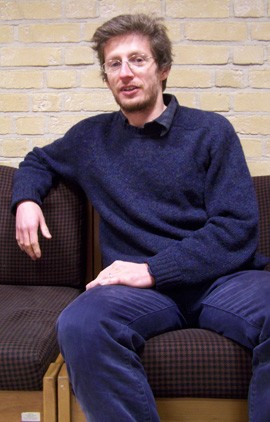 In the last elections, the Italian Left suffered the worst defeat in its history, with a coalition of four parties, which altogether collected only 3.1% of the votes. The main party of this "Rainbow Left" coalition was Rifondazione Comunista, the others being the smaller Party of the Italian Communists, the Greens and the Democratic Left.

In the 2006 elections, Rifondazione alone received 5.8% of the vote for the Chamber of Deputies and 7.4% for the Senate. Three quarters of the left-wing votes as a whole have been lost in these two years and no Socialist or Communist MP has been elected in either chamber of the Parliament.

This was the result of the loss of credibility suffered by the Left during two years of centre-left government - two years of constant humiliation for those political forces.

How did this defeat affect the internal situation within Rifondazione?

The defeat fragmented the leading layer and served to stop the liquidation of the party, a process that has been going on for years. When we mention liquidation, we mean both an organisational and ideological liquidation, and a submission to the bourgeois Democratic Party and the trade union bureaucracy. There was a clear plan to dissolve the party into a new political party - an openly reformist one, where Communist ideas would be reduced to just a "cultural trend" (as Bertinotti declared) and not the ideological basis of the party. The Rainbow Left was supposed to be a decisive step in this direction.

The credibility of the party leaders suffered a collapse after the miserable failure of their line. The defeat also affected the rank and file, generating a reaction that immediately reflected itself in a split in the leadership of the previous party majority.

This is the scenario that led to a congress marked by bitter divisions where five different positions competed with each other; none of which got a majority.

In fact, Rifondazione recognises the right to organise political tendencies within the party. What are the main trends?

43,545 people participated in the party congress. Because of the crisis in leadership, in the party there are currently no fewer than ten groups and subgroups. The five platforms that have been submitted to the vote of the members during the congress are the following ones:

It is important to notice that out of the five groups that competed in the 2005 congress, two left the party, all the others had internal splits, while ours is the only one that maintained its unity and experienced growth.

What was the mood in the congress at the branch level, among the rank and file?

The congress was extremely polarised between the two main groups, because, the Ferrero faction had the image of an anti-liquidation stance. It was on this basis combined with their criticism of participation the government and the undemocratic management of the party in the last two years that they collected most of their votes. The right wing, instead, represented continuity with the party line. It is also an expression of the role of those niches of power that the bureaucracy still occupies through both the control of the party apparatus and some governmental positions on a local scale.

As far as we are concerned, we regard our result as a success. We are the faction that had the highest growth in rank-and-file consensus in comparison with our share in the leading bodies and we enjoyed the support of an important working-class sector of the party.

So, what was the final outcome of the congress?

In the congress all proposals for the dissolution of the party were defeated, both those put forward by Bertinotti's followers and the variant promoted by the third document (a sector of this faction was working for a split in the PRC in order to merge with the other Communist party). At the same time, the lack of any majority position emerging directly from the members' vote, a combination of different factions was needed to work out a new party line able to gain the support of more than 50% of the delegates.

We contributed to the elaboration of the final resolution and we supported it. It comprises some points that clearly indicate a leftwards turn as opposed to the line followed in previous years:

On the basis of these three points, we supported the resolution and also the election of Ferrero as the national secretary. This outcome was interpreted by friends and foes as a shift to the left by Rifondazione, a party in which a policy of class collaboration prevailed for years.

Does this mean that you no longer regard yourselves as an opposition group?

So far, the left turn is on paper. In order for it to translate into deeds, we will keep on fighting without the slightest softening of our criticism of Ferrero's positions.

At the same time, we registered a generalised request that the Marxist tendency obtain leading positions and have a role in the guidance and organisation of the party. This request emerges from the soundest sectors of the party, the most militant layers. They want us to put our ideas into practice in the most difficult period in the party's history.

One of the unresolved issues requiring further discussion is the participation of the party in local government on a city, provincial and regional level. These positions still constitute the basic point of support for all bureaucratic tendencies within the party, including those that take part in this new majority.

Therefore, the need for our battle does not wither away; on the contrary it can now develop on a much broader field.

What kind of reactions has this new situation caused?

In general, comments from the mass media and the leaders of the other left-of-centre and left wing parties are negative. They speak about an "extremist drift" in Rifondazione, trying to spread the perception that the PRC is destined to disappear or become a tiny, insignificant force. These comments confirm the correctness of our decision precisely because they come from those groups who did all they could in these years to turn Rifondazione into an impotent prisoner of the Democratic Party.

At the same time, there are many militants who quit the party, demoralised after the participation in the national government and the liquidation plans, and we believe that they will return to political activity after this congress's outcome.

What do you expect to happen in Italy now?

The Berlusconi government and Confindustria [the industrial bosses' association] have unleashed a very violent offensive. They believe that after wiping the Left out of the parliament they can also force the leaders of CGIL [the main trade union centre] into signing a deal or, if they refuse to do so, marginalise them and make them powerless.

This implies that the only way to fight back is a mass mobilisation, since there is no parliamentary organisation able to oppose this policy - a policy that, besides minor disagreements, is approved by the Democrats too.

The future of Rifondazione will be determined by its viability as a workers' tool to organise this resistance.

Thank you very much.