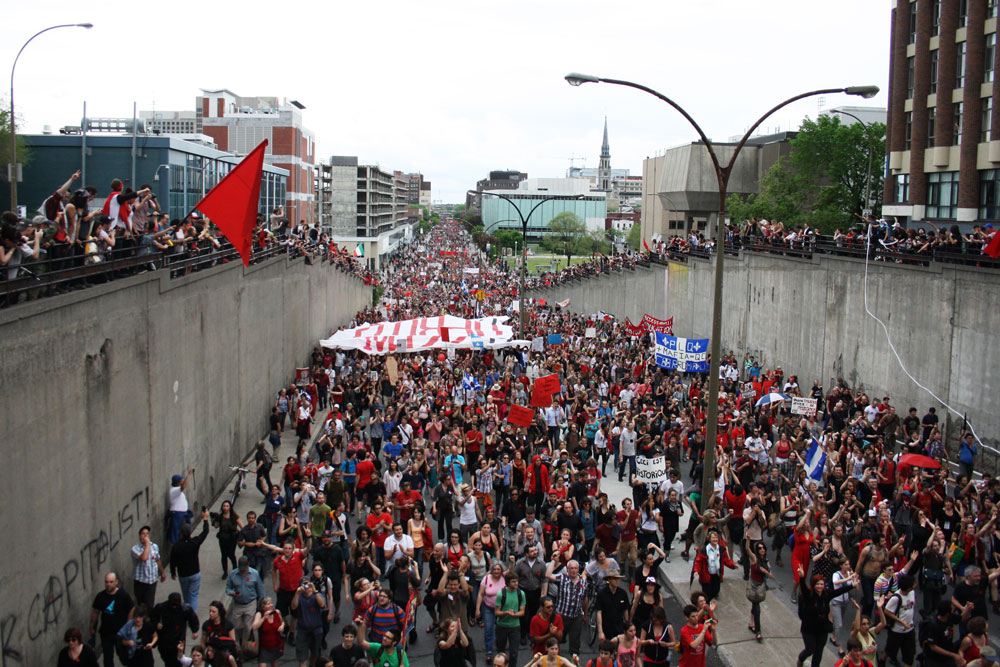 Tuesday, May 22nd saw the largest act of civil disobedience in Canadian history. Between 250,000 and 350,000 youth and workers came out onto the streets of Montreal and openly defied the emergency law that requires police approval of protest routes eight hours in advance. A widely publicized “official route” was broken; the crowd turned away, following an unannounced path.

The crowd was enormous, and easily broke the previous records set by the demonstrations on March 22 and April 22, proving that this movement was beginning to penetrate into wider layers of Quebec society. Jean Charest’s gamble that the movement could be smashed with police batons and emergency powers had backfired, badly.

Last week, Quebec premier Jean Charest announced Bill 78, a law attacking the right to protest of students and workers. The law bans protests within 50-metres of colleges and universities, institutes heavy fines for anyone who disrupts classes, and prohibits more than 50 people from congregating without police permission. The law aims to take aways students’ right to strike. This law is comparable to previous laws imposed on striking workers at Canada Post and Air Canada, forcing them back to work and also removing their right to strike. 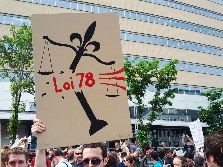 Placard against Bill 78. Photo: Christian AubryUnfortunately for the Quebec premier, enforcing this law is no easy task. For months, the movement has already made court injunctions null and void through mass action. It was inevitable that this law would provoke the same kind of non-compliance. CLASSE, the main student union organizing the strike, responded on Monday at 3:30pm with a press conference announcing that they were calling for civil disobedience and that their spokespeople were ready to go to jail for issuing such an appeal.

The massive turnout yesterday shows how the imposition of Bill 78 has actually given new life to the student movement. The Charest government’s position of defending order had been gaining some ground in the previous period, especially after the smoke bombs were released on the Metro by a small group of individuals. This emergency law has completely exposed the government’s true intentions. The tide has turned very quickly — the government has lost support in the latest polls, and the outcry turned into a massive sea of humanity yesterday. 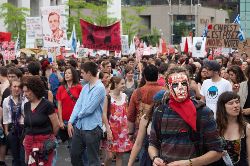 Photo: indratarbenCharest will now be under pressure from two directions within his party. There will be those who argue that this demonstration must be met with fines, or else it will send the message that the law is meaningless. There will be others who argue that any attempt to fine CLASSE would be madness, which would only further strengthen them and expose the undemocratic nature of the law. The premier is stuck. There is no easy way out.

This is the moment to press the advantage and to go on the offensive. This demonstration was an important victory that destroyed the attempts to paint the movement as isolated, and the attempts to make it illegal. Now is the time, while the enemy is disoriented, to advance. Yesterday we saw thousands of workers join the demonstration. The unions mobilized their members to participate. 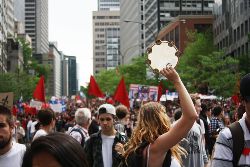 Photo: Christian AubryThe STM workers’ union (representing Montreal transit workers) made a decision yesterday to no longer allow the public transport buses to be used to move riot police and their prisoners around Montreal. The nurses’ union compared the law to the back-to-work legislation imposed upon them by the PQ government in 1999. The teachers’ unions had their right to strike suspended in 2005. Current regulations ban solidarity strikes, political strikes, and picket lines in front of the entrances of the workplace. This struggle needs to be transformed into a larger struggle against all restrictions on the right to strike.

Last week, the CSN public sector workers’ union voted unanimously at its congress to reaffirm the union’s mandate for a social strike and call for a mass mobilization to defend its allies in society, in reference to the student movement. This is a clear step forward. Now this needs to be spread to all the unions which participated in the demonstration, and all the unions which are touched by these kinds of undemocratic restrictions. 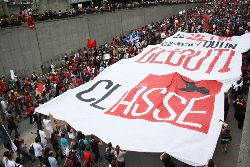 Banner of Classe, the student union. Photo: Justin LingThe students need to capitalize on these opportunities, and go to the factories. It is urgent now to go to the workplaces, talk to the workers, and ask them to hold general assemblies to discuss a 24-hour general strike. The students have raised the hopes of the working class, now is the time to ask for them to enter the struggle in an organized way.

Together, the students and the workers can bring this government down.

“Charest, get out! We’ll find you a job in the north!”

advertisement for the demonstration: