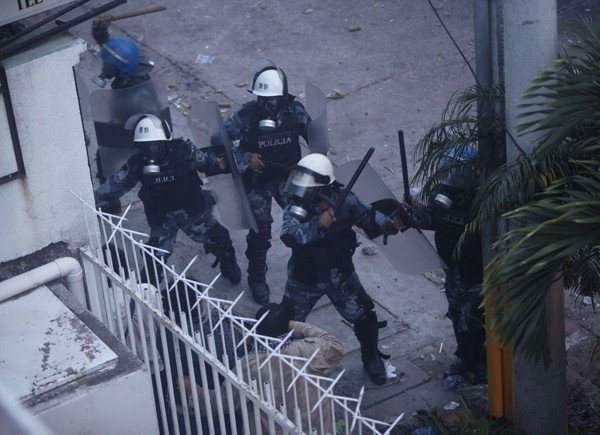 Yesterday morning police and army forces brutally attacked thousands of supporters of Honduran president Mel Zelaya and removed them violently from outside the Brazilian embassy in the capital Tegucigalpa. However, this brutal repression did not crush the will of the Honduran working people to resist against the coup. Following the lead given by the National Front of Resistance, there were mass demonstrations and barricades set up in all of the working class neighbourhoods of the capital and in the main cities throughout the country.

In the early hours of Tuesday, September 22, police and army forces violently attacked thousands of supporters of Honduran president Mel Zelaya and removed them from outside the Brazilian embassy in the capital Tegucigalpa. Zelaya was removed by a military coup on June 28 and for 86 days workers, peasants and youth have maintained a heroic movement of resistance against the coup regime led by Micheletti. To everybody's surprise, Zelaya managed to enter the country in secret and sought refuge in the Brazilian embassy on Monday, September 21, from where he made an appeal to the people to come out to protect him.

Tens of thousands of people had been celebrating outside the embassy despite the fact that the Micheletti regime of the oligarchy had declared a nation-wide curfew, which has now been in place since Monday 4pm and has been extended until Wednesday 6pm. The arrival of Zelaya galvanised the forces of the resistance movement and was a direct challenge to the authority of the coup plotters. They could not stand idle by. Taking advantage of the fact that many of the protestors had already gone home, just before 6am hundreds of heavily armed agents of the anti-riot police and the army, with armoured cars, tear gas and live ammunition, attacked the 5,000 people who still remained outside the embassy. The repression was brutal and finally the people were chased away, their efforts to resist crushed by superior force.

More than 200 people were arrested and taken to the Chochi Sosa stadium, in scenes reminiscent of those of the National Stadium in Chile after Pinochet's coup. There are reports that 80 people have been taken to hospital and that two people have died, though these have not been confirmed and in the midst of the repression, the media blockade and the curfew it is difficult to get any reliable information.

The situation remained extremely tense outside the embassy during the day. The police and the army occupied all the houses surrounding the embassy, giving rise to the rumour that they were about to assault the diplomatic building and kill president Zelaya, to then allege that he had committed suicide. There is no doubt that the Micheletti regime is perfectly capable of this, but they were probably thrown back by the possible international consequences of such an action.

However, this brutal repression did not crush the will of the Honduran working people to resist against the coup. Following the lead given by the National Front of Resistance, there were mass demonstrations and barricades set up in all of the working class neighbourhoods of the capital and similar protests were repeated in the main cities throughout the country. There are also reports of demonstrations and protests in the smaller rural communities. The list of places where people resisted repression, defied the curfew and in some cases chased away the police and the army is long. 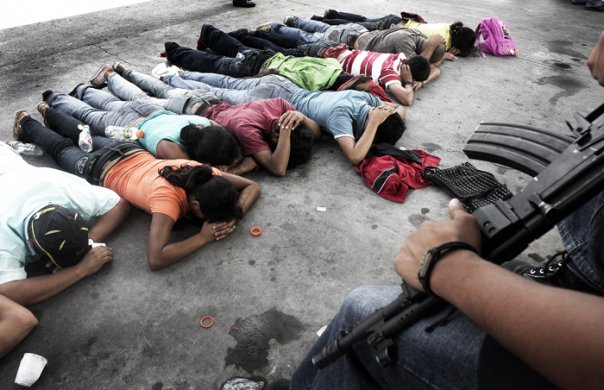 A member of the leadership of the resistance described the situation as one of "insurrection" in the working class and poor neighbourhoods of the capital. This widespread resistance is taking place despite the almost complete media blockade which exists in the country with all of the media ignoring the protest demonstrations with the exception of Radio Globo and Canal 36. The Resistance Front is calling for a mass demonstration on Wednesday, September 23, from 8am outside the University.

Meanwhile, the Micheletti regime attempted to show strength in a press conference with the participation of representatives of the main bosses' organisation COHEP, which promised to give him full support. However, the unity of the regime will depend on how frightened they are by the movement of the masses. Important sections of the ruling class are already considering the possibility of attempting a deal with Zelaya in order to prevent the complete overthrow of the coup regime. The conditions which Micheletti has put forward (Zelaya will not be president, he must accept the legitimacy of the November 29 elections called by the regime and he will face trial) are clearly not something that Mel Zelaya can agree to and are designed mainly as a provocation.

The coup plotters and the Honduran capitalist class are coming under a lot of pressure. The revolutionary crisis has already caused multi-million losses to their businesses and some might start to wonder how much longer they can resist. Above all, they are afraid that if Micheletti maintains a stubborn position, an uprising of the people will sweep all of them to one side. 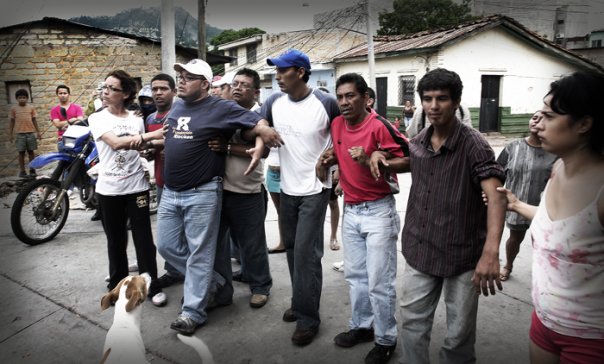 Photo by P. Carbajal. The next few hours and days will be decisive. The structures of the Resistance Front in the neighbourhoods and localities have proven their ability to maintain the mobilisation and in some cases to repel the forces of repression from their neighbourhoods. Today the battle will be for control of the main streets of the capital. These committees of action must widen their tasks and take over the running of the daily life in their areas. The army has taken over the National Energy Enterprise (ENEE) and has cut off electricity and water supply to many areas. The trade union workers of this company together with the Resistance committees in the neighbourhoods must ensure the reestablishment of supply.

The demonstration today is likely to come under heavy repression by the army and the police. The organisers, through the neighbourhood committees of the Front, should establish pickets to defend it and if necessary and feasible to fight back. An appeal should be made to the ranks of the army on the lines of the one that Zelaya has made in the last couple of days: "do not fire on the people, turn your weapons against your officers". The ordinary soldiers in the Honduran army are also sons of working class and poor people. Their relatives and friends must conduct a systematic propaganda campaign and convince the ordinary soldiers that their fate lies with the people, not with the oligarchy. However, at the end of the day, what will break the army and bring down the regime will be the realisation that the workers, the peasants and the poor are the real masters of the situation, through street demonstrations, barricades and an insurrectionary general strike.