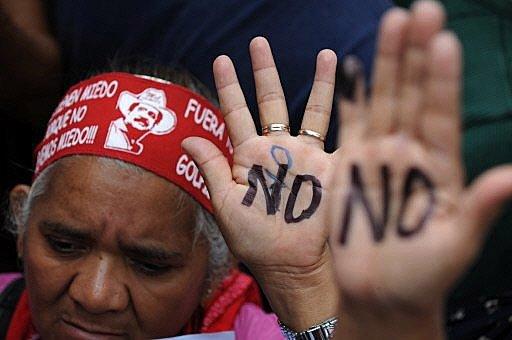 The elections called by the Honduran coup regime on November 29 saw a significant increase in abstention, despite the harsh repression by the military and the police. But the regime has not been able to crush the movement of workers, peasants and youth. On the contrary, they are now more politically aware, better organised and ready to struggle against the oligarchy.

The elections called by the Honduran coup regime on November 29 saw a significant increase in abstention, despite the harsh repression by the military and the police.

Legitimate president Mel Zelaya, from his refuge in the Brazilian embassy, announced that abstention had reached 65% of the electorate (well above the 44% abstention in the 2005 election), with peaks of up to 75% in some districts in the north of the country. An official statement from the National Front of Resistance Against the Coup put the number of voters abstaining at between 65% and 75% of the 4.6 million registered voters.

The official figures released by the Supreme Electoral Tribunal cannot be taken seriously, as they talk of a voter turnout of 61%, which would be higher than the 56% who participated in the previous election in 2005. Just to make sure they would get the results they wanted, after the closing of the poll the official count was “interrupted by a technical glitch” for more than three hours.

This level of abstention takes place despite the heavy repression in the country in the days leading up to November 29 and on “election” day itself. Some commentators noted that on Sunday there were “more boots than votes”, given the amount of police and soldiers on the streets. The Micheletti regime had reinstated the “state of emergency” decree, which severely curtails constitutional rights.

Many of the poor and working class neighbourhoods in the capital Tegucigalpa, and in other cities where the resistance movement is stronger, were practically militarised during the day. This was the case at the colonias Kennedy, La Paz, El Sitio, 3 de Mayo, 15 de Septiembre, El Pedregal, Río Grande, etc.

In a phone conversation Saturday night, left wing member of parliament and leading resistance activist, Tomas Andino, reported that dozens if not hundreds of resistance activists had been arrested during the week. Police entered the houses of ordinary people looking for anti-election material and seized paint and paint sprays. Many of those arrested had been accused of “illegal association”.

Andino explained how the army raided the offices of different trade union and community organisations in search of anti-election publicity. This was the case with the church based organisation INESCO in San Juan Opoa, Copan. The offices of Red Comal in Siguatepeque were also raided on Saturday and the army seized computers and money. On election day itself, a bomb went off outside the offices of the Women’s Rights Centre in San Pedro Sula. The headquarters of STIBYS, the trade union of beverage workers that has been the backbone of the Resistance Front, were attacked with machine gun fire in a drive by shooting.

Regarding opposition radio station Canal 36, Andino reported that “80% of the time is off the air, because the Army is broadcasting a powerful signal on the same wavelength, particularly when the station is broadcasting news or opinions against the de facto government”. 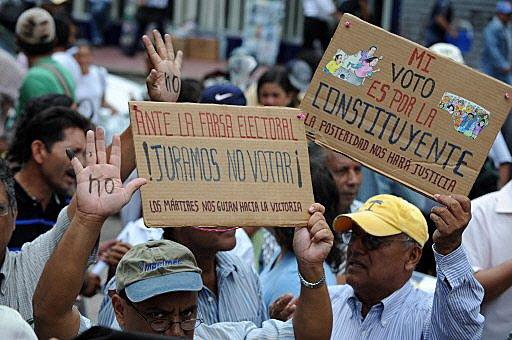 Andino told us how the Resistance had called for what they called a “peoples’ curfew”, so that people would stay home and not go out to vote. Even in these difficult conditions a Resistance demonstration took place in San Pedro Sula, which came under heavy police repression, leaving two people seriously wounded and 49 arrested. Also injured by police repression at this demo was a Reuters reporter who was trying to cover the news.

According to Resistance Front sources there have been more than 74 police and army searches without warrant in houses of different activists, and more than 100 people arrested on election day alone. This is hardly the climate in which a democratic election can take place.

It is worth mentioning that the right wing of the Unificacion Democratica party, led by Cesar Ham, finally decided to participate in the elections, sealing its betrayal of the resistance movement and their own fate as a legitimate left wing force. UD has split down the middle on this issue, with Tomas Andino and others leading a fraction firmly opposing the elections.

The movement of the people has not been crushed

A comrade who visited Honduras a few days before the fraudulent “election” reported on the mood in the working class areas of the capital:

“The tide of the struggle has obviously subsided a bit, but the revolutionary process has not been smashed. Everywhere you go you see election propaganda which has been torn off. The resistance is organising the boycott in every neighbourhood, in most of them there is no election propaganda at all. The ruling class has threatened workers with making them redundant unless they come back to work on Monday with the ink stain in their finger, proving they have voted. A number of large supermarkets are giving discounts and offers to anyone who can show ink in their fingers. The night before I left the country, the hierarchy of the Catholic Church issued a statement to the effect that not voting was a mortal sin.

“On the other hand there have been constant provocations. The day I arrived a number of explosives went off at Grupo Ama car dealerships, and other small bombs exploded near the place where ballot boxes are being kept. They are preparing the mood to justify and even larger Army presence in the street”.

It is clear that the movement of the Honduran masses has not been smashed. They have not yet been able to overthrow the dictatorship, but on the other hand the regime has not been able to crush the movement of workers, peasants and youth. On the contrary, the last five months of struggle have been an intense political education full of rich lessons for the Honduran people. They are now more politically aware, better organised and ready to struggle against the oligarchy.

The Micheletti regime wanted to use this election to legitimise itself, to acquire “democratic” respectability. They managed to get Zelaya into a negotiating process which was a farce and which in the end gave the United States the excuse it needed in order to recognise the November 29 elections. They have partially achieved their aims, as now a series of countries (Peru, Colombia, the US and others) will recognise the “legitimacy” of these elections, and the new “President”, National Party candidate Pepe Lobo. This will give the regime a certain breathing space, as it will mean the resumption of aid from the United States on which the country is heavily reliant. Still, Brazil, the ALBA countries and others seem firm in not recognising these elections.

One of the most important tasks of the Resistance Front activists now is to open a discussion to draw the main lessons of the last five months of struggle. The high abstention levels show the real strength of the mass movement and sets the basis for the continuation of the struggle against the oligarchy and capitalism. The Honduran masses have given an example of heroism, resilience and willingness to fight. Armed with the correct ideas and strategy they can defeat the Honduran ruling class as a first step towards spreading the revolution throughout Central America.

What has been made clear by the events since the June 28 coup is that the Honduran ruling class cannot allow even the most basic reforms in favour of ordinary working people. Faced with a mobilised and conscious population they can only defend their capitalist system through brutal repression. At the same time this means that the struggle for health care, education, jobs and agrarian reform can only be successful if it is fought as a struggle to expropriate the holdings of the 12 families that compose the Honduran oligarchy as well as the interests of imperialist companies. This cannot be done though illusions in Obama, but only through the struggle of workers and peasants themselves. Only they can transform society and only through struggle.