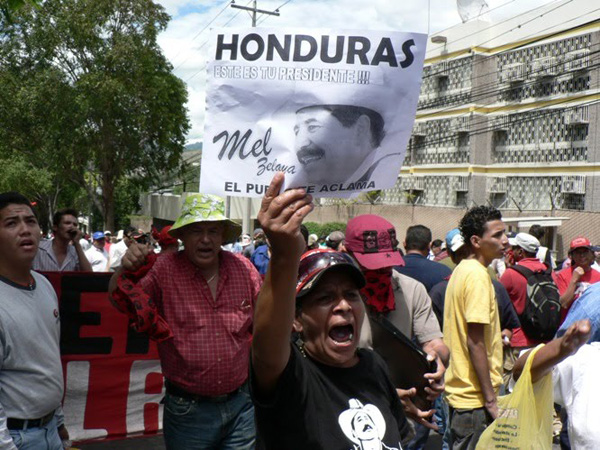 A lot of noise had been made about the so-called “reinstatement of Zelaya”, but is that what is really happening. So far a lot of wheeling and dealing has taken place, but no concrete steps to put Zelaya back as the legitimate president. We will see in the coming days how real this agreement is.

On Monday October 26, the negotiations between representatives of the legitimate president of Honduras, Mel Zelaya, and the regime of Micheletti, installed by the coup which removed Zelaya on June 28, had broken down. There was agreement on most of the points Zelaya’s delegates had raised earlier, bar one, that of Zelaya’s reinstatement as President. Coup-installed “president” Micheletti boasted that he would only resign if Zelaya agreed not to take over.

The arrival of a high level delegation from the United States, headed by US Assistant Secretary of State Tom Shannon changed all that. Micheletti, who had already received a phone call from Hillary Clinton, was told in no uncertain terms that the US would not recognise the November 29 elections called by the coup-regime unless a deal based on the San José Accords was reached, including the reinstatement of Zelaya.

As a matter of fact, as we have explained before, the terms of the San José Accord were already extremely favourable for the coup plotters: a national unity government, general amnesty for the coup plotters, Zelaya giving up on his idea of convening of a Constituent Assembly and the reinstatement of Zelaya only for a couple of months until the January 28 hand over to a new government elected in a poll conducted by the same institutions which had carried out the coup against Zelaya.

Why did Micheletti resist signing such terms for such a long time? He rightly feared that bringing Zelaya back to power, even if gagged and bound hand and foot, would be seen as a victory for the resistance movement which the people had organised for four months. This was extremely dangerous, as it could even lead to a victory for a resistance-backed candidate in the elections. If elections were free and fair and the resistance stood united behind trade union leader Carlos H Reyes, they could win the presidency. Opinion polls also indicate strong support for the candidate of the leftist Democratic Unification party for the mayor of the capital Tegucigalpa.

However, the oligarchy was clearly divided. While one side saw negotiations as a delaying tactic which in the end would force the “international community” to recognise the result of their November 29 elections, another side feared that a massive boycott of those elections on the part of the people would make them illegitimate. Washington threatened to increase the pressure on the oligarchy (including their US bank accounts).

It seems that in the end a secret deal was reached between Shannon and National Party candidate Pepe Lobo, although they strenuously deny they had even met. The deal was to refer Zelaya’s reinstatement back to Congress, where the votes of Zelaya’s supporters in the Liberal Party (now split between Zelayistas and supporters of the coup) added to those of Lobo’s National Party congress members would have a majority. In exchange Zelaya and the “international community” would recognise the November 29 elections, which Lobo hopes to win (if necessary by resorting to fraud).

Zelaya, who had been holed up in the Brazilian embassy for 5 weeks since he was smuggled back into the country on September 21, welcomed the signing of the agreement as a victory. “It is a triumph for Honduran democracy”, he said, “it signifies my return to power in the coming days, and peace for Honduras”. 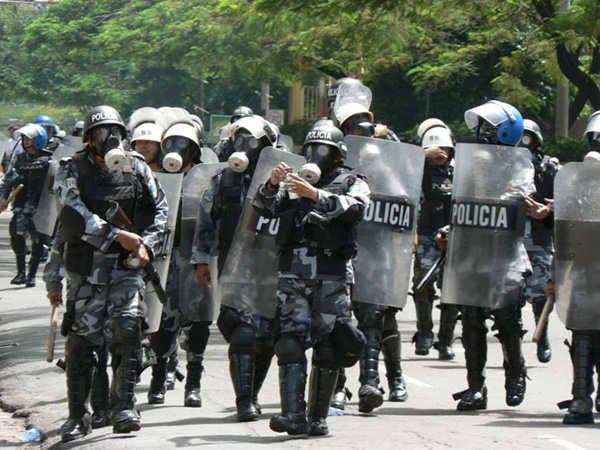 Police forces repressing a demonstration on October 7. Photo by G. Trucchi. A communiqué by the National Front of Resistance Against the Coup also hailed the agreement as a victory for the people. Undoubtedly, had it not been for the heroic resistance of the workers, peasants and youth of Honduras for more than 4 months, the coup would have been consolidated and sooner or later recognised as legitimate by the international community. But we have to ask ourselves, what are the terms of the agreement, and, are these terms even going to be put into practice?

The “Tegucigalpa/San José Accord”, as it is now known, contemplates the creation of a government of “unity and national reconciliation”. In practice this means power sharing between the coup plotters and Zelaya supporters, a recipe for paralysis. Furthermore, the budget that this government will operate on will be one voted by Congress after the coup.

The second point of the agreement rules out any “direct or indirect” appeals for the convening of a Constituent Assembly, and any attempt to “promote or support any popular consultation with the aim of reforming the constitution”. The immediate reason for the oligarchy to organise the coup was to prevent a popular consultation on the need to convene a Constituent Assembly. With this point inserted into the agreement, the reasons for the coup are vindicated.

Point three deals with the recognition of the elections called by the coup-regime on November 29, and appeals to the people to participate in the elections.

Point five deals with the question of the reinstatement of the president. What it actually says is that the negotiating commission, “respectfully” asks National Congress, “after consulting with the Supreme Court of Justice and other instances it considers appropriate”, to bring the Executive Power to the situation before June 28, until the end of its term of office on January 27. Therefore, the decision of restoring Zelaya to power is left in the hands of the same Congress which removed him, after consulting the Supreme Court which provided “legitimacy” for his removal.

What we have here is a situation where Zelaya makes all sorts of concessions, while his actual reinstatement is not even clearly stated! The agreement has a number of other points (particularly an appeal for the international community to recognise the elections and lift any sanctions) and ends with a point of thanks, stressing the role played by the Organisation of American States and US president Obama and US Secretary of State Clinton. 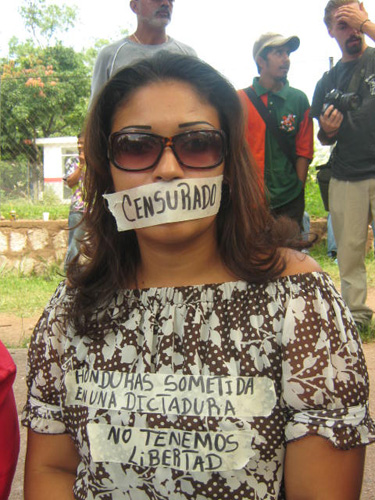 But this agreement, as bad as it is, is not even the end of the saga. Congress is in fact suspended until after the elections, so it would have to call an emergency meeting in order to vote on reinstating Zelaya, who is still holed up in the Brazilian embassy. Meeting on Tuesday, November 3, Congress leaders voted to … pass the parcel. They have asked for an opinion from the Supreme Court, the Attorney General and various other bodies on the question of Zelaya’s reinstatement before they take a decision. In the meantime Micheletti has interpreted the formation of a national unity government by November 5, in his own particular way. In a letter he has sent to Zelaya he has asked him to provide 10 names, from which members of the new government would be chosen, implying that he will be doing the choosing. Tom Shannon has declared that the decision of Congress must be respected, regardless of what this is, that is, even if it decides not to reinstate Zelaya. He added that the US will recognise the November 29 elections even if Congress does not vote the reinstatement of Zelaya.

So, from the point of view of Zelaya and the Resistance not much has changed. The legitimate president is still in precarious refuge at the Brazilian embassy, surrounded by riot police and the army. Police and the army continue to beat up peaceful resistance protestors. The coup plotters are still in power.

Meanwhile, Washington is spinning the agreement as a victory for its diplomatic strategy, the oligarchy has come closer to getting international recognition for its elections on November 29, and Micheletti, the coup plotter, is still president.

It is difficult to predict what will happen in the next few days and hours. Additional pressure from Washington might finally force the reinstatement of Zelaya (gagged, bound hand and foot and only for a couple of months). There could be more trickery on the part of the oligarchy to further delay his reinstatement.

The only real way to break this deadlock would be for the masses to irrupt on the scene again and take the situation into their own hands. They can only trust in their own forces, no one else.