Pakistan
Share
Tweet
The Indian Hindustan Times published an interview with Lal Khan in its Sunday edition of 21st October. In this newspaper, which claims to be the largest in the world with a circulation of 35 million, Lal Khan openly defends the ideas of socialist revolution.

The Indian Hindustan Times published an interview with Lal Khan in its Sunday edition of 21st October. In this newspaper, which claims to be the largest in the world with a circulation of 35 million, Lal Khan openly defends the ideas of socialist revolution.

‘Social revolution only way out'

PARAMITA GHOSH talks to Lal Khan, a Pakistani author and political activist who was in Delhi for the launch of his book Partition - Can it be Undone? The editor of the Asian Marxist Review, his is an alternative view on most of the burning issues between India and Pakistan

Who was Lal Khan? It is not your real name. 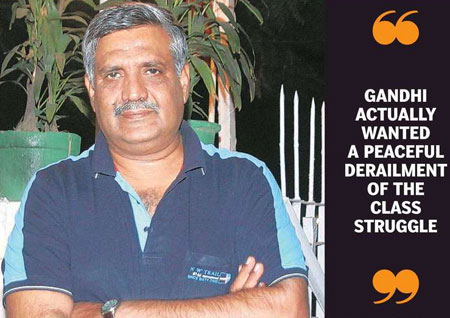 Lal Khan was the name of a sergeant in the British Indian army. He was my uncle and had been a prisoner of the Bolsheviks in 1919 when imperialist armies attacked the new Soviet state. As a child, I used to listen to his stories of how the Bolsheviks in times of food shortage stayed hungry but fed their Indian prisoners. I was impressed. In 1981, I had to choose a pen name to continue my work under the Zia dictatorship. I chose Lal Khan. Lal means red and an ideology. I have been writing under this name for more than 26 years, it would be useless to change the name now.

You've taken on the big boys of the Indian subcontinent - Gandhi, Nehru and Jinnah in your book. How did they influence the way the class picture of the subcontinent looks today?

Even the serious mouthpieces of British Imperialism conceded the clear class divide in the freedom movement. But these politicians could only play this role because the CPI leadership gave up the struggle under instructions of Stalinist Moscow whose bureaucracy was interested in a foreign policy "for the national interests of Russia" rather than following the Marxist-Leninist path of proletarian internationalism.

Your attitude to Gandhi overturns the popular perception. On the one hand, he is also the Bapu of minorities. On the other, in 1922, when Hindu soldiers from the Garhwal rifles refused to fire on an anti-imperialist demo by Muslims, your book talks of Gandhi opposing this act of non-violence.

The ideological basis of Gandhi's policies was confined within the parameters of semi-feudal, semi-capitalist social economic relations. All his political actions flow from this thought. Gandhi actually wanted a peaceful derailment of the class struggle. He might have had an honest sentiment to protect the Muslims but once the forces of reaction and communal hatred were unleashed, he failed to restrain them.

The Indian bourgeois can never lead a revolutionary struggle, said Leon Trotsky and even called Gandhi an artificial leader and a false prophet. Would you say the same of Jinnah? You mention an oyster dinner at the Waldorf hotel in 1933 when he laughed at the idea of Pakistan calling it impractical.

There were innumerable zigzags in that journey from the Waldorf hotel to the Karachi assembly in 1947. All leaders changed through the dynamics of the movement and dictates of the vested interests of the class they represented. Jinnah was vulnerable to that too. Although Trotsky didn't analyze him individually but from the point of view of his theory of permanent revolution, Trotsky's analysis of Jinnah would not have been any different from his analysis of Gandhi.

Pakistan has mostly been under military rule. It has had a democratically elected government thrice in 60 years. Is it a failure of Left politics that Marxism has never been an option, not even as an 'experiment?'

In 1968-69, there was a revolution in Pakistan. Workers occupied factories, peasants besieged the landed estates and the youth were on the streets. The Pakistan Peoples Party was a product of this revolution. Zulfigar Bhutto recognized that the character of the movement was socialist. In any case the basic fault lines in Pakistan are not between democracy and military or extremism and moderation. The fundamental contradiction is of class interests and no stability can come without resolving it.

In 2008, will we see a new direction to politics in Kashmir?

The ruling classes of India and Pakistan have used and abused the Kashmir issue for sixty years. They can't go to all-out war. Nor can they sustain peace. Their systems don't allow them much room. A voluntary socialist federation of the Indian subcontinent would be the only guarantee for a genuine freedom and emancipation of the Kashmiri oppressed.

In Pakistan, the military has, in a way, been an upholder of liberal will. Democratic parties like the PPP are corrupt and discredited. On the other hand, there are the religious rightist forces. Which way will Pakistan go?

Imperialism and religious obscurantism are two sides of the same coin. Mass movement is rejected by mainstream intellectuals in Pakistan. There is always a doom and gloom scenario preached by them. Social revolution is the only way out.

Indian and Pakistani Left - what's the traffic between the two?

There cannot be two separate revolutions in India and Pakistan. 5,000 years of common history is too strong to be cleaved by Partition. We can learn from each other's experiences. Obviously the opposition to the nuclear deal is positive. But from a Marxist point of view, it's not the most important of issue. The Left should try to understand that the basic character of the Indian revolution is not national democratic but socialist. The vote of the masses to the Left in the 2004 Indian elections was for a revolutionary change rather than to maintain status quo. Next time they will vote with their feet.