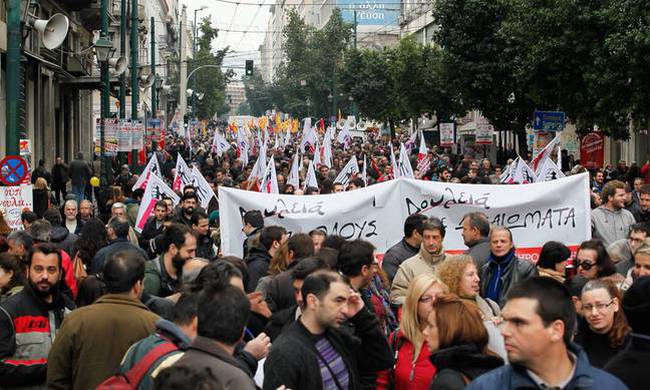 An analysis by the Greek comrades of the IMT of Thursday’s general strike, an important political development marking a new stage in the class struggle. But where should the movement go from here?

The workers, peasants, self-employed, pensioners and the poorest layers of society all came together in a mass front of struggle throughout the country in the general strike of February 4th.

Today's twenty-four hour strike called by the GSEE and ADEDY (the private and public sectors trade union federations) was a genuine general strike, following a period of more than three years during which such mobilisations were poorly attended.

Working-class participation in today’s strike, from both the public and private sectors, was larger than the two previous 24-hour strikes in November and December of last year. This time, however, there was an exceptionally high participation of the lower middle classes, who have been hit hard by the cuts to welfare and the other demands of the third Memorandum.

A common front is forming. Lawyers, engineers, small businessmen, and many other professional sectors, along with the farmers who have been in a state of unrest in recent days – are uniting with the working class throughout the country.

The mass rallies were the most well-attended in four years, not only in Athens and Thessaloniki, but in all cities. In Athens alone a rough estimate would suggest that there were around 100,000 at the two rallies (namely, the GSEE-ADEDY and the PAME-led gatherings). Compared to the last two strikes there was an increased participation in groups from workplaces, and also in the participation of younger workers.

The participation of the unemployed and pensioners was remarkable, as was that of mass groupings of self-employed workers. The rallies in Thessaloniki and Patras were exceptional, being as well attended as the rally in Athens.

The attendance in other important cities such as Heraklion, Larissa, and many smaller provincial towns was also impressive. The local trade union councils, the professional and scientific associations, and the coordinating committees of the militant farmers managed to mobilise thousands, many of whom were participating in the rallies for the first time.

Today’s strike clearly marks an important development in the class struggle. But it also must be understood as an important political development. The generalised attacks of the government, in an “unholy alliance” with the money-lenders and ruling class, is understandably affecting a wide spectrum of poor workers in the cities and countryside. Combined with the militant example provided by the farmers’ uprising, the working class and the poorer social layers are once more taking to the streets.

The shock and paralysis of the working masses after they had enthusiastically and proudly voted “NO” (OXI) in the July 2015 referendum only to be blatantly betrayed by Tsipras, is beginning to wear off. Just seven months after the shock caused by the betrayal of SYRIZA, the masses are showing early but unequivocal signs that they intend to re-enter onto the stage and take back control of their own destiny.

This is a clear answer to the various pro-government or “left” Cassandras that have been suggesting that “the masses passively tolerate or even support the government’s efforts”, or that “the masses have been defeated and that the OXI movement has dissipated”.

Greek capitalism has been permanently on the edge of defaulting. In order to survive, it is forced constantly to pile on the shoulders of the masses one unbearable measure after another. It has not been able to “enjoy” any long-lasting periods of social or political stability. Faced with increased attacks on their living standards, the working masses are forced to mobilise again and again, while drawing at the same time new political conclusions.

The Greek bourgeoisie has every reason to be concerned. The potential outbreak of a new round of mass mobilisations draws closer the demise of the SYRIZA-ANEL government. It brings closer the perspective of a new pro-austerity government that would enjoy a broader majority in parliament. Tsipras’s “political capital” is being exhausted at a time when the traditional bourgeois political camp appears extremely fragile, despite the boost to New Democracy following the election of new leader Kyriakos Mitsotakis.

In reality the Greek bourgeoisie only saw  in the pro-memorandum turn of the Tsipras faction a temporary solution to their problems. They continue to find themselves politically with their “backs to the wall”.  The working and poor masses, in spite of the crushing poverty they are suffering, in spite of the betrayals, through their actions are capable of determining political developments.

Today’s mass general strike, and the mass rallies throughout the country, in reality pose the pressing need for the escalation of the class struggle. The trade unions, the coordinating committees of the farmers, alongside the various professional unions and associations, must coordinate their fight in a new 48-hour general strike.

The forces of the anti-memorandum and anti-capitalist Left (KKE/Greek Communist Party, Popular Unity, Antarsya, etc.,) must promote the formation of committees of struggle in every workplace and neighbourhood, in order to seriously prepare for such a strike.

On the basis of the likely mass working-class response to such a call it would be necessary to escalate the struggle further. The struggle must be seriously organised into an indefinite, all-out strike, until the memorandum pre-conditions are withdrawn. New elections would have to be forced to elect a government willing to abolish the Memoranda, willing to cancel the debt, and willing to eradicate the economic and political power of the banks and and Greek capitalist oligarchy. The coming to power of such a government would open up the path to the end of austerity and the overthrow of capitalist barbarism across Europe.