The situation in Greece is becoming more and more revolutionary as each day passes. The country has been paralysed by a wave of strikes centred on the public sector and state owned enterprises, which is the workers’ response as they attempt to ward off the terrible attacks of the government. This wave of strikes was anticipated by the mass occupation movement in the universities and schools in September, which proved once again that the youth is a sensitive barometer of the class struggle. 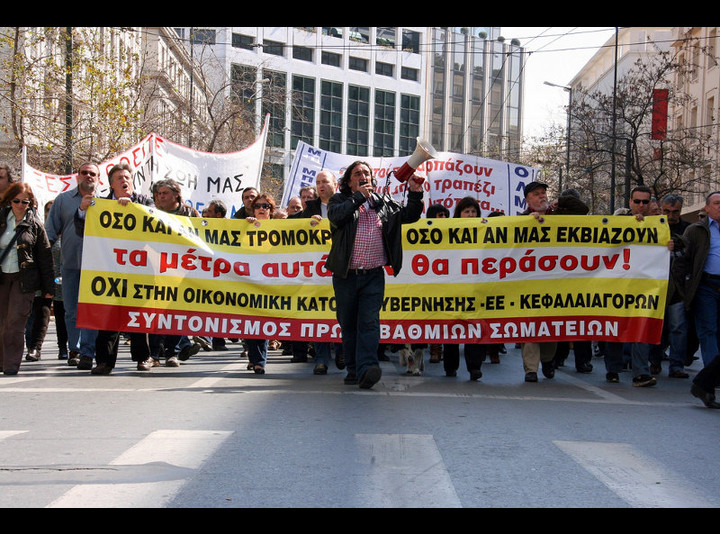 We are seeing mobilisations in those workplaces where we have the most powerful Trade Unions of the Greek working class. Workers in transport, the ports, electricity generation, local government, ministries, hospitals, education, tax offices, and the archaeological sites have decided to take all-out strike action and are also occupying one government building after another.

Also in the private sector now we have a huge government attack, with the same new law demanded by the troika of the ECB, EU and IMF being put to Parliament this coming Thursday, which is aimed at reducing the minimum wage from 750 euros to 550 euros by removing the National General Collective Agreement and all sectoral collective agreements. In fact, the law de facto removes the official role of the unions "until the crisis ends."

The result of all this is that the atmosphere among the workers has become more militant than ever. This time what stands out clearly is the determination to fight until the end. Trade union activists and trade union leaders are saying openly to the media that the strikes are political. A leading trade unionist from the bus workers said last Friday in a famous TV programme that, "we will continue the strikes until the overthrow of the government. We want to wipe out that gang!"

The most militant are the refuse collectors who have been on strike for the past ten days and have staged an occupation of the rubbish dumps. The government sent in the Special Police Forces yesterday to terrorize the strikers but they refused to end their occupation. They stated that if the government did not back off, this would lead to "the spilling of blood.'' The government then proceeded to award the collection of refuse to private companies which, however, are incapable of collecting any rubbish from the streets because they receive constant attacks and insults from ordinary people who shout ''scabs'' at them. This one incident expresses very clearly the rock solid support for the strikes on the part of the majority of the Greek people.

As a result of the huge pressure from the rank and file, the 24-hour general strike of the GSEE (General Confederation of Greek Workers) and ADEDY (Civil Servants Confederation) has become a 48-hour general strike on Wednesday and Thursday of this week. But the mood that is maturing among the working class is going even beyond that, and the idea that what is needed is an all-out political general strike is gripping the minds of many workers.

This situation is putting enormous pressure on the PASOK government, which is now a lot weaker than it was in the summer. The parliamentary group of PASOK – many of whom can see that if they continue to openly support austerity their seats in parliament will be at risk – is coming under immense pressure from the trade unions and the workers in general. Already one PASOK MP has said that he intends to vote against the new law and another has threatened that he would resign. This risks reducing Papandreou’s majority in Parliament to unworkable levels. PASOK has 154 MPs in a Parliament of 300 members.

PASOK’s loss of popular support is also being reflected inside the unions. PASOK has its own factions – known as PASKE – within the trade unions. Already, PASKE in the municipal workers’ union and the teachers’ union split from PASOK earlier this year. Last Wednesday PASKE in the railway workers’ union announced it was breaking with PASOK. We are also witnessing all over Greece a wave of resignations from the party of many of PASOK’s cadres.

The Stalinist leadership of the KKE for the first time, and after pressure from the workers, has abandoned its appeals for early elections and has, instead, decided to organise a spectacular encirclement of the Parliament building this coming Thursday. The occupation of the area in front of the Parliament building that we saw in the summer on the initiative of the People's Assembly of Syntagma Square had much more of a spontaneous but unorganised and "amateur" character to it. An encirclement of the building organised by PAME (the KKE’s faction inside the unions) and the KKE will be entirely different. It will be organised with the participation of the “heavy battalions" of the working class, the building workers, the shipyards workers, etc. This means that the conflict this time will involve much bigger numbers and will also be much more organised.

Thursday’s general strike will mark another important turning point in the situation in Greece. It will be an expression of the intense anger that has built up among workers and youth all over Greece, who are not prepared to take these attacks lying down. Class struggle on unprecedented levels is being prepared in Greece and in this we see the future of the whole of Europe.

We will be updating the situation later this week once the general strike has started.