France
Share
Tweet
An examination of the results of the recent vote in the different federations of the French Communist Party indicates a sharp shift to the left in the thinking of the membership since the previous congress. And the vote for the Marxists confirms this process. 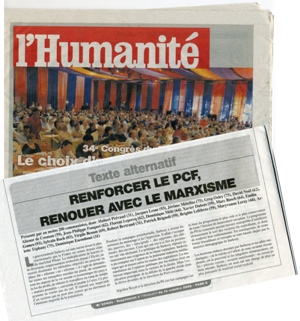 The ideas of Marxism have made a huge step forward in the French Communist Party. Last week, the membership of the party voted to decide which of three documents would become the basic policy statement to be submitted to the 34th Congress. According to the party rules, the document which obtains the highest number of votes then becomes the “common basis”, which can then be amended by the National Congress.

This year, the Marxist wing of the party, whose ideas are expressed in the revolutionary journal La Riposte and on the website of the same name (www.lariposte.com), succeeded in collecting the number of signatures required for their document, which was therefore one of the three basis policy statements put to the vote. For the first time, here was a clear statement of Marxist ideas, in contrast to the insipid and conciliatory politics of the reformists who lead the party at the present time, and untainted, also, by the false caricature of communist ideas represented by the Stalinist falsifications of the past. The text was sent out to more than 100,000 party members in a special edition of L’Humanité.

To the surprise of the party leadership – and, it has to be said, to that of the authors of the document – Renforcer le PCF, renouer avec le marxisme won 15% of the vote! Another oppositional text, whose main protagonist is André Gerin (deputy-mayor of Vénissieux, a suburb of Lyon), was extremely critical of the party leadership, although from a “left” reformist and nationalist standpoint. This obtained 25% of the vote, bringing the total score of the left opposition to 40%. Both texts, in spite of important differences between them, were considered by party members as a means of rejecting the moderate “anti-liberal” content of the party programme over recent years.

An examination of the results of the vote in the different federations (in the PCF, each department, or county, has its own federation, made up of the local party sections, or branches) indicates a sharp shift to the left in the thinking of the membership since the previous congress. The policy statement presented by the national leadership lost votes in 92 départements (out of a total of 99, four of which are overseas). In percentage terms, the opposition increased its share of the vote in 87% of départements. In 71 of these, the increase was more than 10%, and in 32, it was more than 20%. The opposition obtained a majority in 14 federations (10 more than last time) and got more than one third of the votes in 58 federations, compared to only 7 at the time of the last congress. 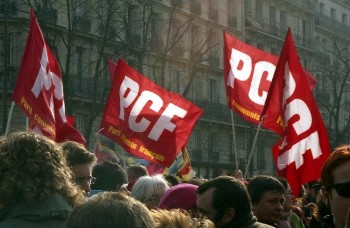 The vote for the text presented by the Marxists is extremely important. It will have a major effect on political developments in the party over the next period. This was a “rank and file” document. Among the party members who signed the text there was not a single member of parliament, nor senator, nor mayor, nor even one of the 254 members of the National Council of the PCF. In spite of all the work carried out by La Riposte, which has been struggling for many years to re-establish the programme and theoretical basis of Marxism in the PCF, the list of names attached to the document were unknown to the vast majority of party members, unlike the list of sponsors of the left reformist and nationalist opposition, which includes a number of respected and “historic” leaders of party.

It should also be noted that, rather than answering the political ideas in Renforcer le PCF, renouer avec le marxisme, the supporters of Gerin have spent recent months trying to arouse suspicion and distrust against its authors, whom they qualify as “social-democrats”, agents of the national leadership to “divide the opposition”, “entrists”, etc. In such circumstances as these, and given the extremely slender human and financial resources of La Riposte, it would still have been a major step forward for Marxism, even if the vote had been much smaller. But 15% is a really remarkable development, for which there is only one serious explanation: the impact of the ideas put forward in the text. The title of the document sums up its basic argument. The PCF must be strengthened, and the only way to do this is on the basis of genuine Marxist ideas.

Renforcer le PCF, renouer avec le marxisme explained that the reactionary policies of Sarkozy and of previous right-wing governments did not fall from the sky, but were the expression of a system in crisis, a system that had become completely incompatible with the social reforms and material conquests achieved by the struggles of the workers in the past. It explained the sharp decline in the world position of French capitalism, and the consequences that flow from this for the working people. It explained that given the tremendous struggles which the workers and youth of France had carried out in recent years, with wave after wave of strikes and mass demonstrations, the PCF could have and should have gone from strength to strength, especially given the complete bankruptcy of the leadership of the Socialist Party, which was the main explanation for the victory of Sarkozy in 2007. And yet the PCF, rather than advancing, has declined in membership, in electoral support, and in all aspects of its activity.

The explanation for this decline, the document argues, is the move away from communist ideas and policy on the part of the leadership, to the extent that it openly supported, at the time of the Jospin government (1997-2002) the biggest privatisation programme of any government in the entire history of the country. Some of the points in the programme of the party are examined in detail, such as the proposal that workers, as taxpayers, should pay the interest on bank loans contracted by the capitalists, in order to encourage the latter to invest in jobs and technology! International questions such as Venezuela, Cuba and Afghanistan are also dealt with in the document, which then goes on to explain what kind of programme the PCF should adopt in order to reinforce its position among the most politically advanced layers of the workers and youth, and then in the working class as a whole.

Messages of support for the Marxist opposition came in from a number of countries, including Spain, Italy and Brazil. A new website has been launched, www.renforcerlepcf.com. Three important documents, published by La Riposte, added to the impact of the main text. The mailing list of La Riposte includes some 14,000 addresses. These documents included an answer to the leadership of the PCF in the 15th arrondissement in Paris, who tried to present the Marxist text as being the fruit of a shady international conspiracy, a criticism of the text put forward by the national leadership, and an explanation of the fundamental differences between Renforcer le PCF, renouer avec le marxisme and the text presented by Gerin and his allies (including the leadership of Paris 15).

André Gerin, in particular, defends certain ideas that if they became those of the PCF would do serious damage to the party. His ideas are a variety of “national-communist” populism, including racist ideas. In his recent book, "The Ghettos of the Republic" Gerin refers to an openly racist speech made by Chirac back in 1991, in which he cast “Blacks and Muslims” in the role of social parasites and complained of the "noise and the smell" they supposedly make. Gerin says that Chirac was "only telling the truth".

This kind of thinking can lead to right-wing conclusions, and it would not be the first time, in the history of the PCF, that leading figures with a “left” oppositional posture have moved over to the extreme right. Gerin appears to be on this same path.

In the context of the present world crisis of capitalism, a growing number of communists in France have understood that the reformist and “anti-liberal” dilution of the party programme does not provide a serious alternative to capitalism. From now one, there is a legitimate and publicly acknowledged Marxist wing of the PCF. With 15% of the vote, the ideas of La Riposte can no longer be ignored, and will undoubtedly make further progress in the months and years that lie ahead.