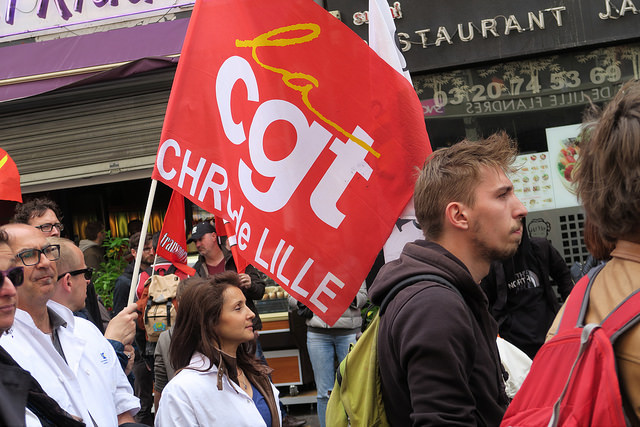 The fight against the labor law has entered a new, decisive  phase. The development of open-ended strikes and blockades in several key sectors of the economy have changed the dynamics of movement. Everything is accelerating. After a series of “days of action” in the past two months - to which the government responded with police violence and 49-3 (a special article in the constitution which allows the government to bypass parliament and decree laws,) -  the immediate logical goal of the movement has now become to paralyze the economy. This is the only path to achieve victory.

[Originally published in French in Révolution]

Just like the strike movement which occurred in the fall of 2010, transport workers and oil sector workers are at the forefront of the movement. The government immediately mobilized the riot police to attack fuel-depot blockages. But in response, the workers of several refineries voted to stop production. Faced with a determined and collective action of the workers, police repression is counter-productive from the standpoint of the government. In fact, it managed to radicalized the struggle. In the wake of the shutdown of the Total refinery in Feyzin, near Lyon, Eric Sellini (CGT Total) explained to AFP: “The workers are more motivated than ever, even those who initially were rather reluctant. We have turned the corner in the mobilization.” (our emphasis)

The Intersyndicale unions (CGT, Solidaires, FO, FSU, UNEF, UNL, LDIFs) calls for a new national "day of action" on 26th of May and another on June 14th. But now these days of action can only be of interest if they are directly related to the ongoing strike movement; their goal is to support and especially to extend this movement. The movement has moved beyond the stage of one-day mobilizations; it is clear that in themselves, they will not make the government back down. The focal point of the struggle has moved to the terrain of open-ended strikes. There are now two options: either the strike grows and expands to new sectors - or the movement will be defeated.

In the autumn of 2010, facing yet another government offensive against pensions, an ongoing strike had started in several critical areas: refineries, ports, public and road transports and garbage collection among others. At their peak, these strikes had a significant impact on the economy, but in the end they came short of winning. Public transport, for example, were only partially paralyzed. The leaders of the union federations leaders - including Bernard Thibault (CGT) - did not call for the extension of the movement open-ended strikes. They were content to call for new “days of action!” (there were 14 in total). On three occasions (12, 16 and 19 October) between 3 and 3.5 million people took to the streets. But the government did not give in. Being isolated, the striking workers eventually returned to work. The pension counter-reform was adopted.

Since 2010, the effects of the capitalist crisis and austerity policies have created an explosive situation. In the past six years tensions have been on the rise. This is clearly demonstrated by the mobilization of youth and by the Nuit Debout movement. The potential of the current movement is therefore even larger than in 2010. But as in 2010, its Achilles heel is the attitude and strategy of the trade union leadership.

The pressure of the trade union basis

Due to the  position of the CGT in the labor movement, its attitude is decisive. Its congress in mid-April was marked by the intervention of many delegates demanding of the national leadership to seriously prepare an ongoing strike movement. The strategy of organizing “days of action” has been criticized repeatedly. In response to this pressure from below, the leadership has passed a resolution calling for "the organisation of general meetings in companies and public services so that employees decide, on the basis of their demands and in unity on the strike and its extension, in order to achieve the withdrawal of the Labour law and to open genuine negotiations about social progress.“ In an interview with La Provence on 21 April, Philippe Martinez stated: „We are open to all forms of struggle, including an indefinite strike, but it is the employees in the general meeting who decide and the first step is to organise general assemblies."

Of course it is impossible to launch a serious ongoing strike against the will of a majority of workers in any company. The need to organize general assemblies is also evident. Trade union activists understand this. What they need is a clear, offensive and determined attitude of their national leadership. When they call for a general assembly of the workers in their company, they need to show them that the CGT- starting with its national leadership - will not leave them alone and that the CGT will conduct a systematic, energetic, massive campaign to mobilize as many sectors as possible in the movement. Faced with the labour law, the open-ended strike is not only a "form of struggle" among others, in the words of Martinez; it is now the only form of struggle that could lead to a victory. This is the message that should be hammered home by the tops of the CGT. Without this, the workers of a general assembly will look over the shoulder of their unionized colleagues, towards the leadership of the CGT - and, noting a hesitant, vacillating attitude they will say: "If we strike, we risk being left alone.“

In the wake of the congress of the CGT, the pressure of rank and file continued to grow, especially since the beginning of open-ended strikes last week. On saturday 20 May, Martinez came to support of the strikers near Valenciennes. Surrounded by workers chanting “General strike!” Martinez said: “The strike spreads. Employees of four refineries are on strike. (...) The CGT proposes to spread the strikes. (...) They must be spread to the metal industry as well as to retail.“ That's exactly what the CGT leadership should say! And they must proclaim this not only on the occasion of a gathering of striking workers, as on Saturday, but systematically on all media, by all means at the disposal of the CGT by organising a large campaign of national agitation and a well developed plan.

No time to lose!

By its very nature, the expansion of an ongoing strike must be fast. Every day counts. One cannot ask for transport workers and refinery workers to wait indefinitely for the support of workers in other sectors. The day of action on 26 May, which was announced by the Intersyndicale, can play a role in supporting and expanding the strike movement. But what about the day of action on 14 June? It is in three weeks. Until then, either the open-ended strike will spread to other sectors, or the movement will have ebbed. At least that is the most likely prospect - and consistent with the experience of 2010.

On 20 May, in a statement announcing the 14 June mobilization, the Intersyndicale explained: "The organizations decided to strengthen their action by a one-day strike with a national demonstration in Paris on June 14 at the beginning of the debates in the Senate. They call for the multiplication of mobilizations in diversified forms by then.“ Here we find the dangerous idea of "mobilizations in diversified forms“ while the only effective weapon now is the open-ended strike and its extension. The Intersyndicale should concentrate all its forces and those of its militants on this objective. Without losing time, we must extend the movement "to the metal industries, to retail" as Martinez said on Saturday. We must begin with the most militant, most combative sectors to lead others behind them.

The 14 June was chosen because it corresponds with the opening of the "debates in the Senate." But how can the pace of the mobilization depend on the parliamentary calendar? If a powerful open-ended strike grows quickly, the Senate won’t discuss anything, because the government will capitulate. The idea of “putting pressure” on parliamentarians is all the more disturbing because the government has applied article 49-3! Incidentally, this episode has shown that the so-called "rebellious" Socialists want to "oppose" the labour law, but not enough to bring down the government - they did not vote in favor of the motion of censure. The government will only resort to parliamentary services again if the dynamics of the struggle requires it, and only in order to save the law by sacrificing this or that article. Now they seek to involve the trade union leaders in the maneuver. On saturday, Martinez reiterated: "We fight for the withdrawal" pure and simple of the law. This line should be maintained until the end.

The same statement of the Intersyndicale announces "a big referendum in companies, administrations and universities that will take place in the coming weeks in parallel to the parliamentary debate to continue the debates on the labour law among workers and youth, to obtain the withdrawal of the text, to win new rights and for the development of stable high-quality jobs.“ Again, there is a discrepancy of the strategy with the real dynamics of the struggle on the ground. There is no longer the need a "big vote" to demonstrate that the overwhelming majority of employees opposes the labour law: all polls already indicate this. Most workers no longer need to be convinced of the reactionary character of this law; they need to be convinced that their mobilization can lead to victory; they need a strategy and clear, offensive perspectives.

Is the objective of this "great referendum" to convince the government? That would be absurd. The government knows that the majority of employees opposes the Labour Law. But it takes his orders from MEDEF (ed. Movement of the Enterprises of France - the largest employer federation in France), not from a "great referendum“ by workers. And it will only retreat when faced with a strong open-ended strike movement. All forces of the labor movement must therefore focus on this goal. There is no more time to lose: the coming days will be decisive.

Finally, "the development of stable high-quality jobs", mentioned in the statement of the Intersyndicale is a laudable goal, but unattainable under capitalism in crisis, which in contrary means permanent social regression. We have to explain this truth to the workers. If they really want to fight for „stable high-quality jobs“, trade unions must call for decisive actions against the power of the capitalists, that is to say, their control of the economy. We must transform the defensive struggle against the labor law to an offensive struggle against the power and privileges of the "200 families" of big capitalists who control everything and decide everything in this country.