Share
Tweet
The heavy-handed intervention of the army and police on Sunday managed to block the general strike, but it has enraged the workers and youth who have continued to protest.

On Sunday, as we reported yesterday, the planned general strike called by the Mahalla textile workers was blocked by a heavy police and military intervention. Although the strike was scuppered, there were huge protests on the streets and violent clashes with the police. Instead of intimidating the workers the heavy-handed intervention has increased their determination to struggle. 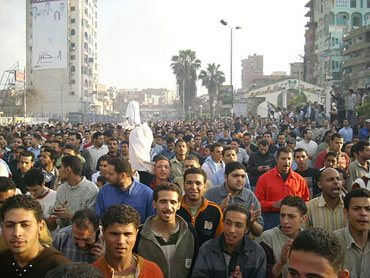 Now the protests in Egypt are continuing. The latest news is that textile workers involved in leading the protests are still being held by the police. They were interrogated at the Tanta Prosecutor's Office and according to some unconfirmed reports they were subject to severe beatings. It has also been confirmed that four demonstrators were killed by the police [see appeal].

Mahalla was under police occupation yesterday. The workers at the Mahalla textile mill have been forced by a heavy police intervention to turn up for work, but that does not mean everything is back to normal. The scenes in the surrounding neighbourhoods remind one of the Palestinian Territories, with a heavy presence of military vehicles. While this is going on the families of the arrested workers have been gathering outside the local police stations demanding to know what has happened to their family members and bringing them food and so on.

According to the Egyptian Workers and Trade Unions Watch "42,000 workers took part in either strikes, sit-ins or demonstrations during the past month, while 54,000 workers threatened to do the same... The month also witnessed 22 sit-ins, 13 demonstrations and 10 strikes." This shows that Malhalla is not an isolated case, but merely the tip of an iceberg. There is seething discontent across the whole country. The deep-felt hatred of the regime was graphically shown when people vented their anger against by stamping on big pictures of Mubarak. In this little detail we see the future of this regime, which cannot be a very long one. 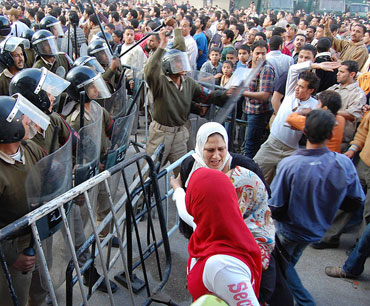 On the 3arabawy website a socialist activist in Mahalla was quoted reporting about what was happening on April 7 (yesterday). He said that,

"around 4pm a 2000-strong demonstration started in El-Bahr Street in Mahalla. The protesters were chanting against the government, price increases, police brutality... The troops cracked down on the demonstration, but that hardly made the demonstrators disperse. Instead, over the course of an hour, the protest [outside the Mahalla police station] grew to something between 40,000 to 50,000... It's passed 7pm now in Mahalla. There is not one demonstration, but several. Most of the demonstrators' chants are against the government and calling for the release of those detained yesterday [Sunday]... The police renewed its crackdown, and arrests are being conducted now."

The mood of the workers is clearly evident in the video available here below where in the face of armed police they show no fear whatsoever. The Egyptian workers are on the move and whatever measures the government takes they cannot be stopped. It is the objective situation that is pushing the workers forward. Their life has become unbearable. Bread has not only become very expensive, it is also in short supply. The government has ordered the army bakeries to supply bread to the commercial outlets in a desperate attempt to alleviate the problem.

Marxists have always explained that when a socio-economic system is no longer able to develop the productive forces then its days are numbered. The system in Egypt cannot even provide bread!

[Information based on reports on 3arabawy]