On Thursday, a 25,000 strong demonstration was held in the Danish capital Copenhagen. This was a reaction against forced deportation of a group of Iraqi refugees, as well as police brutality against peaceful demonstrators who tried to stop the police from arresting the Iraqis who had taken refuge in a church in Copenhagen.

This was the biggest demonstration this year, as industrial action has collapsed since the crisis hit Denmark around November last year. Still, the mood beneath the surface is one of frustration and anger towards the right-wing government. 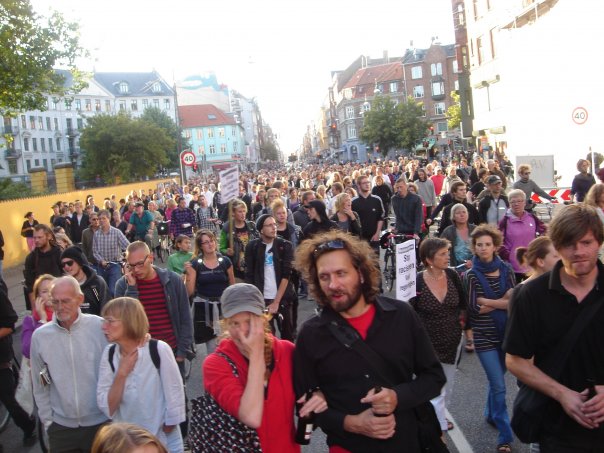 The right-wing government in Denmark is probably one of the most racist in Western Europe. The entire government programme concerning immigrants and refugees is dictated by the racist Danish Peoples’ Party who blame all problems in society on “foreigners” in general and Muslims in particular. Still, after eight years of virtually closed borders, no problems have been solved – on the contrary.

182 Iraqi refugees have been denied asylum status, and they have been set for deportation. Among these refugees, there are many children who have never even been to Iraq, and many teenagers who do not even speak Arabic. Among the refugees, several have seen their families slaughtered by sectarian madmen in Iraq, and they fear for their lives if they are sent to Iraq themselves. Even organisations such as the UN and Amnesty International have warned against deporting the Iraqis. Still, the right-wing government does not care. They care more about splitting the Danish workers with racist propaganda and present themselves as “keepers of law and order”.

A group of Iraqi refugees have taken refuge in the Brorson Church in Copenhagen. They have been there for months, and many volunteers have tried to help them with everything from bedding to food, toys for the children and cigarettes for the adults. The night before Thursday, the police entered the church to arrest a number of the refugees. The police gave a show of brutality as they hit all and everybody with their batons. Men, women and children, old and young, were beaten up by the police.

Outside the church, a group of protestors spontaneously gathered to try in a peaceful manner to stop the arrests and deportations. The protestors sat down to block the street, but they were met with repression. A video showing the police brutality can be seen here.

On Thursday, a demonstration was called for the same day by means of mobile text messages, Facebook and mouth-to-mouth. More than 25,000 took part in this spontaneous demonstration! This was clearly the biggest demonstration in this whole year.

This case has further polarised the political landscape in Denmark. The Social Democracy is absolutely split on this question. The Party’s chair, Helle Thorning-Schmidt, has declared her full support for the government and the police. However, the party’s youth organisation, DSU, have declared themselves clearly against the government and in favour of the refugees. Also, several high-ranking Social Democrats have declared that they disagree with the party leadership. Two former chairmen, Poul Nyrup Rasmussen (who is also the former prime minister) and Mogens Lykketoft, as well as the mayor of Copenhagen Ritt Bjerregaard, have said that the treatment of the Iraqis is “inhumane”. Another former chairman of the party, Svend Auken, who recently died, was a speaker at an earlier demonstration in favour of asylum for the refugees. All this is an indication of a complete split in the Social Democracy – not just on this question.

The chairman of the LO (Danish TUC) in the second biggest city, Aarhus, Hans Halvorsen, declared that the police brutality resembled something from a police dictatorship.

The chairman of the Socialist Peoples’ Party (SF), Villy Søvndal, has also marked opposition to the government, although in a somehow weak manner. Clearly, the SF leaders do not want to have their “good relationship” with the Social Democratic leaders (a relationship consisting of throwing SF’s own programme overboard) spoiled.

This November there will be local elections. The main government party, the liberal Venstre, have already announced that they cannot contest seriously about the mayor posts in the five biggest cities. They have thrown in the towel, and they realize that these seats will go to the Social Democrats (or even the SF!). The next parliamentary elections will most likely (unless the workers’ leaders seriously sabotage everything) see the right-wing kicked out of office, and a new government with the Social Democrats and SF will take over. There will be huge illusions in such a government, and it will enter into crisis as the leaders cannot deliver their promises without taking serious measures against the capitalist rule.

The movement in defence of the Iraqi refugees clearly shows that there is ferment in Danish society – especially among the youth. The level of industrial action was very high until around last November, when the crisis hit Denmark. At one point, Denmark was ranking number 3 in OECD as for strikes compared to number of workers – with only Canada and Iceland striking more. Now, the workers fear for their jobs and have temporarily withdrawn, as a turtle draws its head back into protection when it senses danger. But this will only last for a temporary period. One thing is for sure: big explosions are prepared, and a future workers’ government in crisis, combined with a sluggish economic recovery, will only serve to aggravate the situation.