The Italian section of the International Marxist Tendency is having its national conference in Milan between 6th and 8th December. 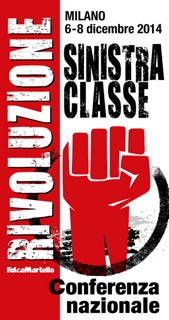 The conference is taking place at a turning point of the class struggle in Italy. The Renzi government has launched an all-out offensive on the working class and their organisations. Like Thatcher in the Eighties, Renzi's aim is to destroy the organised strength of the proletariat. His arrogant statements (“They strike, I work”) have provoked a reaction at all levels of society.

The trade union leaders, who up until last summer thougth that they lived in a system where strikes and demostrations were not necessary in order to “negotiate” with bosses and the government, were taken by surprise by these attacks. As a result they have been forced to react and to organise the workers for struggle.

On October 25th, the working class showed its true face when up to a million came out to demonstrate.  This was followed by two big strikes of the metal workers in Milan and Naples in November. There have been demonstrations and sector strikes all over the country. On December 12 there will be an 8 hour general strike (the first since 2002) called by CGIL and UIL, the third biggest trade union federation, with rallies all over Italy.

At a polical level, the crisis of the system continues. In the elections that took place on November 24 in two regions, Emilia Romagna and Calabria, the level of abstention was unprecented. In Emilia Romagna, the cradle of the Italian Communist Party and now a stronghold of the Democratic Party, 63% of the voters did not go to the polls. The Democratic Party won the elections but lost 700,000 thousand voters, compared to last May's European elections. Most of the workers stayed at home, as Landini, the secretary of the FIOM metal workers union, commented “The polls are empty, while the streets are full”. The parties to the left of the PD were not able top take advantage of the situation and scored poor results.

There is a gaping political vacuum in society which the leadership of the workers organisation has a duty to fill. Our slogan “For a party of the working class, for a revolutionary alternative”, connects completely today not only with a tiny vanguard, but with the feelings of tens of thousands of workers and youth.

Given this context, we are launching a political movement called “Sinistra classe rivoluzione” (“left wing, class, revolution”) at our congress. We are also discussing our programme called 'For the Revolutionary Alternative'.

At the same time, we will discuss starting a new paper with a new name, which is going to be published every two to three weeks, starting from next spring, to connect our ideas to a broader layer of the masses. FalceMartello will remain as our theoretical magazine.

The attendance at the congress will be one of our largest ever, with more than 150 comrades confirmed.

We are looking with confidence to the future. The Italian working class is rediscovering its place in the arena of the international class struggle.

The Italian Marxists have the opportunity, and the duty, to build a mass tendency that can lead the proletariat to power in the coming revolution.

Below we publish the agenda of the conference (in Italian).