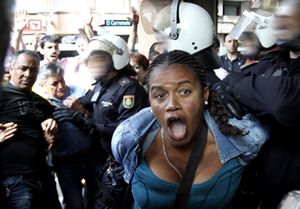 You couldn’t have made it up. A family of Cuban “dissidents” brought to Spain by the Spanish government over two years ago found themselves evicted from their home in Alicante by the police because they couldn’t afford to pay the rent. Now they say they want to go back to Cuba!

Gilberto Martínez, 50, and his family, arrived in Spain in 2011, as part of a group of a few hundred Cuban “dissidents” in an agreement between the Spanish Socialist Party government, the Cuban government and the Catholic Church. As part of the deal these so-called political exiles were entitled to receive benefits and financial help and they were also given accommodation.

Ironically, with the arrival of the right-wing Popular Party government in November 2011, some of the benefits they were receiving were abolished as part of the austerity cuts. Now, these opponents of the Cuban revolution found themselves in the middle of an acute capitalist crisis in which millions of workers have lost their jobs and as a consequence hundreds of thousands of families have been evicted from their homes.

In July last year they stopped paying their rent of 400 euro a month and then from September they could no longer afford to pay for electricity or water. After the end of the special government subsidies, the exiles had had to rely on charity aid from the Red Cross and Caritas, but even that had dried up.

On May 7, the police arrived at their flat with the intention of enforcing an eviction order for non-payment of rent. Evictions and repossessions of homes have reached epidemic proportions in Spain as a result of the capitalist crisis. In dozens of cities and towns across the country people have organised anti-eviction campaigns (Plataformas de Afectados por las Hipotecas, StopDesahucios) and are using all means at their disposal to highlight the issue and resist evictions and repossessions.

A group of 80 activists had gathered outside the flat to try to prevent the Cuban family from being thrown out. There have been many small victories of the anti-evictions movement. This was not to be one of them, however. Two people were arrested, four were injured and a family of five found themselves out on the streets without a roof over their heads. This was the balance-sheet of a day in the life of capitalist democracy enforced by the armed bodies of men in defence of private property. Ah, but the democratic right of the owner of the flat to make a profit on it was dutifully protected.

Jose María Copete, spokesperson for the Stop Desahucios Alicante campaign said that there are 40 families risking immediate eviction for non-payment of rent, a situation, he says which “could be easily solved as there are 20,000 empty flats in Alicante”.

This is a tragic story, but one cannot help but smile at the irony of it. The Cuban family are opponents of the Cuban revolution, but have been given a harsh lesson in what “Western democracy” is really about. “If I had been told in Cuba what was going on in Spain, I would have stayed there,” said Gilberto, “I am only asking to be sent back to Cuba”.

Of course, there are no evictions in Cuba. The revolution abolished them. Housing was one of the key issues the Cuban revolutionaries had inscribed in their programme as it affected the overwhelming majority of the population. One of the very first measures of the victorious revolutionary government was the cancellation of all evictions and repossessions, on January 26, 1959, when the revolution was barely a month old. On March 10, 1959 the government decreed a 30 to 50% reduction in all rents. The 1960 Urban Reform Law gave all tenants ownership of the flats they lived in and abolished rents altogether. There were also provisions for the compulsory purchase of urban land to prevent speculation. The guiding principle of the housing policy of the Cuban revolution was to ensure housing as a right and not as a source of private profit. Thus, everyone was guaranteed ownership of their homes, but they could not sell them on.

What this goes to prove is that within the limits of capitalism, which is based on private profit making rather than the needs of the population, there is no real, lasting solution to the problem of housing.

This story should also serve as a warning to the Cuban revolution. It is true, Cuba abolished capitalism, but it is under enormous pressure from the world market and is also subject to a ruthless decades-long blockade and embargo. In Cuba everyone has a roof over their heads but the housing stock is in a bad state of disrepair (aggravated by the 2008 hurricanes) and there is an acute problem of lack of new housing. Despite the legal prohibition on the sale of properties there is a thriving black market in houses.

As part of a number of measures adopted in the last year, which represent a series of concessions to the market, in November 2011, the government legalised the purchase and sale of housing. Though there are a number of conditions attached to this new regulations (only Cuban citizens living in the country and foreigners who have permanent residency are allowed to buy and sale, and no-one is allowed to have more than his or her own house and a further holiday residence), these measures represent a dangerous concession to powerful market forces.

There is a certain element of ingenuity amongst the Cuban people in relation to what capitalism really means and particularly what the introduction of market measures would mean for Cuba. In one of my visits to Cuba I was asked whether in Spain people were allowed to buy and sell their homes. I replied by saying that this was the case, that there was a “free” market in housing, which meant that some own many houses, while others have to pay half of their income in rent or mortgage to be able to afford a roof over their heads. Now, with the capitalist crisis, this means also that those who cannot pay are being thrown onto the streets. The story of Gilberto Martínez and his family should serve as a warning.

There are two main lessons to be drawn: the problem of housing can only be solved through a revolution which abolishes the capitalist mode of production – any concessions that the Cuban revolution makes to market forces leads to a situation where fundamental gains of the revolution are put in jeopardy.