While NATO throws its weight behind the reactionary Erdogan government, he continues his onslaught against Kurdish and left forces. Erdogan however, is acting from a position of weakness and he could provoke a mass movement against himself.

"The Kurds were born to be betrayed. Almost every would-be Middle East statelet was promised freedom after the First World War, and the Kurds even sent a delegation to Versailles to ask for a nation and safe borders." - Robert Fisk

Yet again, today, the major western imperialist powers gathered to under-sign yet another betrayal of this tested people, whose fate has been traded between every major power of the region for a hundred years, as if it were just another item on their shopping list. Following the emergency meeting of NATO - a very rare event - General Secretary Jens Stoltenberg expressed "strong solidarity" with Turkey in its war on "terrorism". The joint declaration by the NATO members stated that, "The security of the alliance is indivisible," and condemned the recent terror attacks in Turkey, describing terrorism as "a global threat that knows no border, nationality, or religion — a challenge that the international community must fight and tackle together."

The hypocrisy of this statement is clear to see for all. For the past four years the Turkish government has been working closely with the most barbaric terrorist groups, spanning from the various sections of Al Qaeda in Syria to the Islamic State itself. There is little doubt in fact that the Turkish intelligence services were directly involved in the ISIS terrorist attack in Suruc, Turkey last week which cost the lives of 32 young left activists and injured another 102.

The Erdogan regime is also continuing its bombing campaign of PKK forces in both Iraq and Turkey. These bombings are in fact assisting ISIS. Zagros Hiwa, a PKK spokesperson, explained how a PKK convoy in Iraq was bombed when “they were going to Kirkuk and Sinjar to fight ISIS”. He said that Turkey is now hindering, rather than helping, the fight against ISIS, “Most of our forces that have been targeted were forces that were preparing themselves to go to fight against ISIS,” he said.

This is clearly also aimed at shoring up the rotten Barzani regime in Iraqi Kurdistan, which has been under pressure from the growing influence of PKK aligned groups. Especially the popular power which the Syrian branch of the PKK promote is in stark contrast to his semi-tribal authoritarian rule in the Kurdish Regional Government. However, while the Barzani clan may be strengthened militarily for the moment, this blatant cooperation with imperialist Turkey against fellow Kurds fighting ISIS will lead to the weakening of Barzani's support in Iraq and clear the way for a rapid change of mood against him.

At the same time Turkey and the US have declared plans for a no-fly zone in northern Syria. Turkey’s foreign minister, Mevlüt Çavuşoğlu, said: “When areas in northern Syria are cleared of the [Isis] threat, the safe zones will be formed naturally. We have always defended safe zones and no-fly zones… People who have been displaced can be placed in those safe areas.”

But a no fly-zone cannot function without forces on the ground. Who will provide these forces? Most probably they will be a coalition of Al Qaeda and other similar Islamist forces (of course with new names) which will operate as proxies of Turkish, Qatari and Saudi imperialism in Syria. Thus the result of the NATO meeting was not to defend Turkey from terrorism, but to aid its Islamist henchmen in Syria and to shore up its attacks on Kurdish forces in the region.

Here's the intended safe zone in Northern Syria. Idea behind it for Turkey: stop the creation of a Kurdish nation ... pic.twitter.com/1Tbwa3qOHp

All the while the onslaught against the PKK, which has been the most efficient force against ISIS, continued. In an attempt to cover for their cynical betrayal of the Kurds in Syria, a US spokesperson said, “The fact that we now have access to bases in Turkey will allow for that support to be more timely and perhaps even more effective. So I would expect that that kind of air support will continue.”

He also continued to say that, “Turkey has continued to come under attack by PKK terrorists, and we recognise their right to defend themselves against those attacks. And it was in retaliation for recent attacks by the PKK that Turkey conducted these most recent strikes”. This is a blatant lie. Seeing the rise of the Kurdish based HDP as a credible all-Turkish left force, Erdogan has been trying to provoke a war with the PKK for months. Turkish intelligence has been involved in countless terrorist attacks against HDP meetings, since the parliamentary campaign. The Suruc attack last week was merely the most deadly of these Erdogan-sponsored attacks.

Turkey is the 15th largest economy in the world, with armed forces of more than a million. This powerful military machine is not the victim in this affair, but the unilateral aggressor. At the same time it is using its offensive against the PKK to strike at the left.

"'Of the more than 1,000 people Turkey has arrested in security sweeps in recent days, 80% are Kurdish, associated either with the PKK or the non-violent Kurdish Peoples’ Democratic Party (HDP),' says İbrahim Ayhan, a member of parliament for the HDP. 'The victory of the Kurds against ISIS was seen by Turkey as some sort of challenge,' says Ayhan. 'This is all seen as a threat by Turkey'."

In fact, news coming out of Turkey and Syria of successful attacks on ISIS have been remarkably sparse. The main aim of Erdogan is clearly to curb the rise of the HDP, a left party which has managed to galvanise a significant layer of radicalised workers and youth around it. This was clear when his government announced that it is launching criminal investigations against the HDP on the grounds that it may have committed criminal acts.

However, trying to stabilise his rule at home through a military intervention in the region could have serious repercussions for the stability of Turkey in the future. The HDP's election result was higher than any commentator had predicted. At the same time, an even larger layer, who didn't vote for the HDP because they had suspicions that they might cooperate with Erdogan but who were sympathetic to its radical programme, has since moved closer to the party. For many Turks, the HDP appears as the only party which is not tainted byÂ  corruption and lack of principles. It is the only party which boldly takes up their social demands as well as their democratic rights. The fact that Erdogan is attacking it, is likely to strengthen this view.

In the Kurdish areas of Turkey the HDP is embedded even more deeply. Here the party experienced a real landslide victory giving it up to 90% of the vote in some areas. The attacks on Erdogan on the HDP will only consolidate this and carry within it the potential for an uprising against his regime in the area.

Furthermore, the Kurds are no longer a nation isolated in backward areas, but have become a component part of the working class in Turkey, working in the same factories and workplaces. The attempt of Erdogan to divide the working class can thus lead to an even bigger backlash by the Turkish working class that has been stepping up its struggles in the last period. In the month of May thousands of auto-workers embarked on a militant strike against the bosses, the state as well as their own union bosses. This is an indication of the mood amongst the workers, which can resurface on an even wider scale in the future. 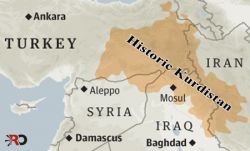 On the other hand, if Erdogan is successful in his attempts to divert the class struggle along nationalist and sectarian lines he risks destabilising Turkey and even preparing for it to break up in the future. At the same time his rash actions in Syria are undermining the most efficient ally of the US-led coalition on the ground, the YPG. Already YPG officials have signalled that they may shift their allegiance to the Assad regime. Hassan Nasrallah, the leader of Hizbollah, reached out to the Kurds by condemning the attacks on the PKK. The same has been the case with the message from the Iran-friendly Iraqi government. If the PKK moves closer to Iran it would be a major shift in the dynamic of the regime and could escalate a widening of the conflict.

Erdogan seems obsessed with saving his own personal position. In fact, the NATO meeting and his unilateral declaration of war on the PKK was much to the dismay of the Western capitalists. The US in particular, are not interested in breaking their relationship with the YPG who have been the most efficient force against ISIS on the ground in Syria. They were also not impressed by Erdogan, who took advantage of the fact that NATO is in a conflict with Russia and cannot appear divided to call an emergency meeting and de facto twist the arm of the West to fall in line behind him. Thus, by trying to save his own personal position Erdogan is risking the stability of Turkish capitalism as a whole and now also the western institutions. This has been noted by a section of the western capitalists.

Thus there were also reports of serious warnings to Turkey by other NATO members behind closed doors. They were told to put pressure on Erdogan to pull back from his offensive. Reflecting this sentiment, the European parliament's Turkey rapporteur Kati Piri wrote on Twitter:
"Dangerous rhetorics in Turkey against HDP, which won 6 million votes in last elections. Time to face that reality."

The bourgeois are not comfortable with Erdogan's individual adventure. But this is not because of their "democratic" values or principles. As we see, they have no problem in supporting the most reactionary forces, as long as their interests are preserved. What they fear is that Erdogan could unleash a revolutionary movement which would endanger their position. They are basically saying "Don't attack the masses, because you might unleash a revolution". Erdogan on the other hand is saying "I have to crack down on the revolutionary forces before they get stronger". In such a situation where the ruling class is divided and the masses are radicalised after years of corruption and oppression, the potential for a mass revolutionary movement arises.

If the HDP takes a clear stance against the Erdogan regime and organises a national movement of Kurdish and Turkish workers against oppression, against violence, against Islamism and for rising living standards, the ground could be prepared for a general strike and a mass revolutionary movement which could sweep aside the rotten regime and open a new period in the history of Turkey, the Middle East and beyond. The real divisions are not between nations, but between classes. We can have no trust in any forces of the bourgeois, whether "democratic" or otherwise. Only through united mass struggle of the oppressed against US imperialism and its reactionary allies, can we stop the monstrous reactionary forces which they are unleashing onto the region.