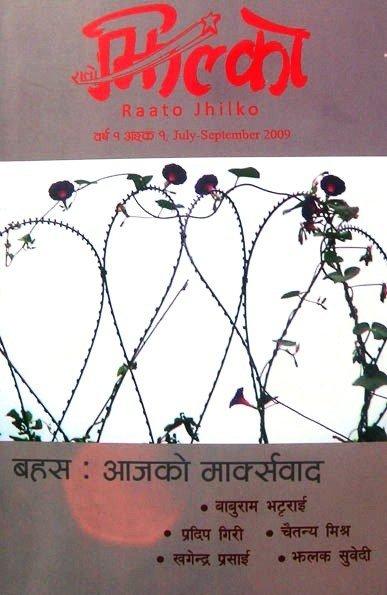 This summer The Red Spark [Rato Jhilko - see photo], a journal of the Communist Party of Nepal published an article by Baburam Bhattarai, which stated that, “Trotskyism has become more relevant than Stalinism to advance the cause of the proletariat”. This is the result of concrete historical experience that has revealed the real essence of Stalinism and vindicated the ideas of Leon Trotsky, in the case of Nepal in particular of the theory of the Permanent Revolution.

In The Red Spark [Rato Jhilko - see photo], a journal of the Communist Party of Nepal, one of the leading theoreticians of the party, Baburam Bhattarai, recently wrote an article that has not gone unnoticed within the Communist movement, both in Nepal and internationally. Bhattarai, 55, is a politburo member of the main Maoist organization in Nepal. He was Minister of Finance in August 2008 during the participation of the Maoists in the coalition government that they later abandoned. While the Communist Party of Nepal has long advocated the ideas of Mao and Stalin, this is what he wrote:

“Today, the globalization of imperialist capitalism has increased many-fold as compared to the period of the October Revolution. The development of information technology has converted the world into a global village. However, due to the unequal and extreme development inherent in capitalist imperialism this has created inequality between different nations. In this context, there is still (some) possibility of revolution in a single country similar to the October revolution; however, in order to sustain the revolution, we definitely need a global or at least a regional wave of revolution in a couple of countries. In this context, Marxist revolutionaries should recognize the fact that in the current context, Trotskyism has become more relevant than Stalinism to advance the cause of the proletariat”. (The Red Spark, July 2009, Issue 1, Page-10, our translation from Nepali language).

Up till now, for the Nepalese Maoists the truth about the life and contribution of comrade Leon Trotsky had been hidden, and this also applies to their own cadres. Now that the road of Stalinism and Maoism is heading towards a dead end, and the party cadres are demanding an explanation from their Leaders, the latter have been forced to speak the truth about the Bolshevik Revolution in general and about Leon Trotsky in particular. This recognition is also an indication of the fact that the Maoists are trying to draw a balance sheet of their decades-long campaign.

One of the major differences between Stalin and Trotsky was the issue of "socialism in one country". By 1904, Trotsky had developed the idea that the Russian revolution against the Tsarist regime, would not stop at the immediate tasks of the "bourgeois-democratic" revolution (agrarian reform, parliamentary democracy, rights of national minorities, etc.). In other words, the Russian Revolution would not stop at the establishment of a bourgeois democratic regime. Indeed, Trotsky explained that due to the weakness of the Russian bourgeoisie and its dependence on the Tsar, the leading role in the revolution would necessarily fall to the working class. The underdevelopment of the Russian economy would not prevent the working class from seizing power and then initiating a socialist transformation of society. But at the same time, Trotsky explained that it would be impossible to establish a viable socialist regime without the extension of the revolution to several other countries in a relatively short period of time. This perspective entered into the history of Marxism as the "theory of the Permanent Revolution".

After Lenin's death in 1924, Stalin and other leaders of the Bolshevik Party attacked the theory of the Permanent Revolution, to which they opposed the theory of "socialism in one country". According to this theory, it was possible to build socialism in Russia, regardless of the international context. The prospect of a "world revolution" was thus abandoned. This theory reflected the nationalist, bureaucratic degeneration of the Soviet regime, due to the prolonged isolation of the Russian revolution and the economic and cultural backwardness of the country.

Bhattarai is, however, mistaken on one point. In 1917, neither Lenin, nor Trotsky, nor any other leader of the Bolshevik party (not even Stalin himself) considered that the revolution could be confined to one country. Nobody even mentioned this idea before it became the motto of Stalin from 1924 onwards. But despite this factual error of Bhattarai, the fact that a senior leader of a traditionally "Stalinist" party recognizes the validity of the ideas of Trotsky is a very significant development. This will stimulate a very useful discussion within the Communist movement on the historical roots of Stalinism and the ideas of genuine Marxism.

Now in Nepal there is a growing interest in the theory of the Permanent Revolution. The fact that a Maoist leader has recognised that “in the current context of globalised capitalist domination, Trotskyism has become more relevant than Stalinism” is an extremely interesting development. With this debate there is also a clear step towards building links with other movements and organisations that challenge capitalism globally. It is in fact the duty of Marxists everywhere to debate and discuss the correct tactics and strategy for the revolution internationally. In that sense we welcome Bhattarai’s article and wish to contribute to the discussions among Nepalese communists. The struggle for socialism is an international struggle, and a victory for the Nepalese communists would be a victory for the workers of the whole of the South Asian subcontinent, and indeed of the world.