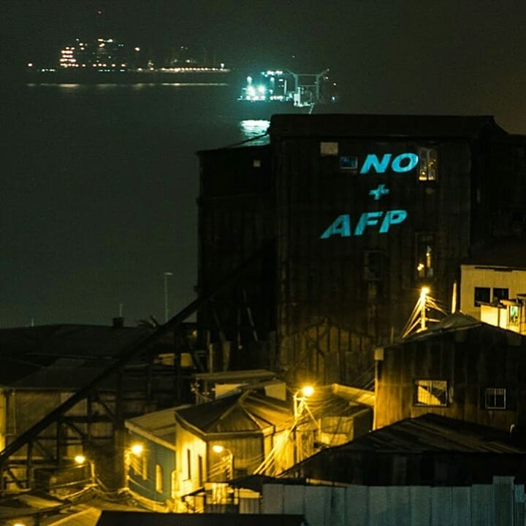 A debate on a bill to withdraw 10 percent of pensions in Chile comes at a time when most of the working population is being affected by COVID-19 and the early stages of a capitalist crisis. The abysmal handling of the pandemic has led to the death of at least 7,000 people and the collapse of the healthcare system. A new wave of protest shows that the spirit of 2019 is still alive for the Chilean workers and youth.

The government seems to be taking the tragedy as an opportunity to do business and get their hands on state funds. Moreover, the pension system in Chile is clearly failing; it cannot guarantee even the smallest amount of money for retirees to live decently. Nevertheless, this system is indeed very efficient for financing the expansion of companies owned by the richest sections of society.

Yesterday, during the national debate on the bill, there were a series of protests and skirmishes with the police in dozens of Santiago’s communes. The clashes took place following a successful day of cacerolazos (banging pots and pans in protest), organised to take place at 9pm by the “No+AFP” (No more private pensions) movement. In light of the various demonstrations recorded in dozens of the communes of the Santiago Metropolitan Region and throughout the country, these have without a doubt been the most important protests during these past few months during the pandemic. Barricades and roadblocks were set up, shops were looted, police stations were attacked. All this occurred in spite of the curfew and the quarantine in force in the Metropolitan Region.

A capitalist government and their “middle class”

Just yesterday, the government announced a set of measures for the “middle class”, including a bonus of 500,000 pesos intended for a very small section of the population. This proposal is the third of its kind. The government hopes that, with the proposal it can push, the right-wing sectors to close ranks. These measures coincide with another bill, an act to improve the operation of capital markets, which seeks to offer pension funds to businesses who do not fall under the current lowest financial classification, i.e. who may be at serious risk of bankruptcy.

Strong protests took place in Sntiago de Chile and of the country's cities on Tuesday and Wednesday against the Government and in support of an initiative that must be voted today in the lower house.#PLEnglish #PrensaLatinaActualizahttps://t.co/aMN2iIUm9d pic.twitter.com/WkHV67Kni6

Despite the government’s efforts, the split between right-wing MPs has enabled the bill allowing the withdrawal of 10 percent of individual pension funds to move forward. Judging by the statement signed by the heads of the leading business organisations, known as the “amendment to avoid the (potentially irreversible) attack on the social protection system and the long-term fiscal stability of our country”, the corporate sector is clearly on edge.

Minister of the Interior and Public Security, Gonzalo Blumel pushed the government to criminalise the demonstrations, stating that they have nothing to do with economic issues or the bill to withdraw funds from private pensions, but rather “organised groups of subversive elements”. He also adds that “there is no justification for these levels of violence or the use of violent methods. We are a democracy, we live in a democracy, this violence is incompatible with democracy”. In the same vein, the Minister of Health, Enrique Paris, judged the disturbances and violence as immoral and called upon the population to keep the peace and stay unified in order to deal with the pandemic.

As a strategy, the government’s appeal to the “middle class” and its accusations of protests being organised by “subversive groups” have been completely unsuccessful. In reality, the insurrectionary movement, which took place in October, emerged in protest of the gulf between the working class and a handful of parasitic capitalists who disregard the lives of the people.

Private pensions: who stands to gain?

The aim of the pension fund is to guarantee that workers live decently in their old age. They should not be a bank for capitalists, nor should they be the source of pension managers’ profits. If this is the case, it is due to this pension system’s violent imposition during the military dictatorship. The transition from a solidarity-based system of distribution to a system of individual capitalisation in the interests of capital falls in line with the overall onslaught of capitalism which manifested itself in neoliberalism. The private pensions system brought in by José Piñera’s older brother – the Minister of Labour during the dictatorship – promised that in 2020, pensioners would retire with 100 percent of their wage, with individual users owning the funds.

Although pension managers can increase available individual funds, this is not guaranteed; after all, these funds are invested into financial instruments, which are at risk of being devalued when they are split from the productive sector that keeps them afloat. This is what occurred during the subprime mortgage crisis and what may arise in a fast-approaching crisis of capital. Furthermore, it is well-known that the model is largely based on privatised profits and socialised losses. In other words, the blame for losses is attributed to personal savings accounts, whilst profits are appropriated by pension managers.

Therefore, even if it is presumed that investing funds yields a positive return, there is one thing that hinders the system from ensuring adequate pensions: individual contributions are variable and are not consistent. That is to say, insurers are not guaranteed a steady stream of funds and there are gaps in contributions. Capitalists blame workers, stating that they don’t save enough, but in actual fact it’s got more to do with unreliable work and unemployment. 40 percent of the working population are subjected to unreliable work in connection with lower wages, according to data from 2018. Simply put, the system brings about uncertainty and casualisation linked to the system of waged labour in Chile which stops 40 percent of the working population from contributing to their pensions. Capitalism needs a permanent reserve army of unemployed people in order to function and lower the wages of all of the working class. In recent years, the rate of unemployment has stayed at seven percent, but has now risen to 11.2 percent. As a result, much of the working population is not able to pay enough “voluntary” contributions to be guaranteed a pension.

Where do pension managers get their profits from? Where do the profits used by businesses for investment come from? The truth is that all the money funnelled into private pensions come from contributions from the worker amounting to 10 percent of their salary. That is, part of their wage is collected and made available to businesses through the private pensions system. The money is produced on the job, where the worker generates profits for the capitalist in addition to the money for their own wage. This is how the capitalist not only appropriates unpaid labour (in the form of profits), but also takes part of the workers’ wage and repurposes it for the expansion of their productive capacity through the private pensions model. Essentially, the bourgeoisie appropriates part of the wage, which in the past the worker had intended for their old age.

Allowing the withdrawal of 10 percent of the pension funds would make it possible for workers to overcome this difficult time. We warn the worker, however, of the fine print attached and that as long as the bourgeoisie has economic control, the logic of profit and the commercialisation of the essential parts of life, such as health and pensions, can never be avoided. We must put an end to the private pensions system in order to put forward a solidarity-based distribution system, or whatever the workers decide.

On the way to a second outbreak

The bill is making progress in parliament due to splits in the Chile Vamos coalition and support from the opposition, but we cannot rule out it being halted or, even with the approval of parliament; getting passed over to the Constitutional Court; or vetoed by the president. If it does get rejected or vetoed, we may see a rise in demonstrations and further polarisation.

In Chile, a struggle is being waged, with the mass movement on one side and Piñera’s government and the capitalists on the other side. The masses see the withdrawal of 10 percent of their pension as slight progress. They bear in mind that they’re taking back money produced by their labour, ill-gotten funds in the hands of companies that speculate with their pensions. In turn, the most powerful economic sector in Chile, the so-called “landlords of Chile”, see them as a threat to their interests since they’re facilitating the end of the private pensions system.

Regardless of how things will turn out in parliament, it’s remarkable that the masses are engaging in a struggle to achieve their demands under the current circumstances. The Chilean Port Workers’ Union went on a 13-hour strike on Wednesday. The Central Port Workers’ Union’s spokesperson, Ricardo Rodríguez, commented that “we’re working from the second shift and we will wait as the withdrawal issue is dealt with until it is voted on in the senate. The private pensions system is not and will never be adequate, the system which mires the people in poverty must be amended. Withdrawing 10 percent is perfectly valid as it’s our money. Since October, on top of the social uprising and the pandemic, many have lost over 10 percent of their funds, but no one is saying anything”. In order to achieve all our demands, we must continue on in our approach until we reach a general strike, so that it can be made loud and clear that in this country, wealth is produced by the working class, and the capitalist minority will no longer be allowed to get rich at the expense of our lives and the environment.

In order to finance the social rights of the working people, copper, lithium, the sea and water should be nationalised for the community. Under quarantine, a small and vital stream of emergency income could be guaranteed for those who cannot earn a wage. Additionally, workers in industries where the pandemic has halted operations could be guaranteed a full wage. If the working class organises itself in their neighbourhoods and at work and sets out to coordinate on a regional and national level, the money can be administered for the benefit of the majority. We must find support in organisations such as soup kitchens and other forms of self-organisation that have arised from the events of October. The port workers have established the course of action. We’re not only fighting for 10 percent. We’re fighting to put an end to the private pensions system, to end Sebastián Piñera’s capitalist government once and for all.