Austria
Share
Tweet
The visit of George W. Bush to Vienna for the EU-US-summit is over. The Austrian police forces were given a great opportunity to test their "emergency procedures" under the guidance of the CIA while thousands of people demonstrated against Bush and the imperialist policies he stands for.

The visit of George W. Bush together with his wife and more than 500 US security agents to Vienna for the EU-US-summit is over. The Austrian police forces were given a great opportunity to test their "emergency procedures" under the guidance of the CIA while thousands of people demonstrated against Bush and the imperialist policies he stands for.

Hours before Bush, the president of the mightiest country in the world, arrived at the Vienna-Schwechat airport, an incredible array of security measures was set in motion. The city centre was blocked off. People living or working in the "red zone" could enter only by showing their documents and a special permit.

Severe “no parking” zones were established along the route Bush and his convoy were expected to travel as well as at all the places where the US president would stay. Dozens of cars were towed. Car owners had to pay huge fines. Even bicycles in the "red zone" were removed. When Bush arrived on Tuesday evening all the traffic in the area was diverted. The whole motorway connecting the airport with the city was closed for Mr. Bush. At every corner two or three policemen were positioned to stop people from using the streets that Bush would pass along. Even the sidewalks became “no go” zones. Police boats patrolled the Danube. Helicopters flew above the city centre. Sharpshooters were positioned at sensitive locations. 3,000 policemen from all over the country were brought together to realise this absurd security plan. A further 500-800 security agents from the US supported and commanded them. This is what "national sovereignty" means in the era of imperialism. The Austrian anti-terror unit, COBRA, cooperated closely with the US units. The cost of these security measures is estimated to be at least 1 million euro. The measures used to guarantee the safety of the US president were in reality a test for civil war.

It was not only the President’s safety that was a top priority. The entire inner city of Vienna was closed for 5 hours because the President’s wife, Laura Bush, wanted to visit St. Stephan’s Cathedral and some museums. What this shows is how high the ruling class and its political representatives have raised themselves above the rest of society. As a female worker said in a TV interview, "Those responsible for such policies against the people of course require such safety measures."

The Austrian government and state president Heinz Fischer (SP) received this important guest and gave him a demonstration of real Austrian hospitality. More delicate topics like Guantanamo Bay and the secret CIA flights in Europe (some of which landed in Austria as new reports have proven) were but briefly touched upon. A real protest against the role of US imperialism was refused by the servile Austrian government. As Bush said at the final press conference about his relationship with the conservative Austrian chancellor Schüssel, “I call him Wolfgang, he calls me George W.”

Throughout the visit one could see people protesting against Bush all throughout the city. There were T-shirts and stickers and even a famous left-wing author had "Bush go home" in big letters on the roof of his house. Opinion polls showed that an overwhelming majority of the population was against Bush’s visit. Bush is seen by 80% of the population as a symbol for war and exploitation. These absurd security measures, which resemble those under a dictatorship and which led to the bullying of so many ordinary people (workers, students, etc.), were the last straw for people and helped mobilise public opinion against the US president, and in reality, against the system he represents. Many "apolitical" people also learned some lessons over the course of the visit.

Extreme right-wing politicians like Jörg Haider and H.C. Strache tried to gain some ground by making some anti-American statements. Nevertheless it was clear from the beginning that the protest against Bush’s visit was mainly left wing and progressive. The mass media was quite critical in its reports of the visit and also about the role of Bush and the US in the world. This of course reflects a common mood in Europe against "America". Nevertheless, there was also broad coverage of the visit of Cindy Sheehan, the mother of an American GI who died in Iraq. She has become an icon of the US anti-war movement. She spoke at two public meetings organised by the Social Democracy and by the trade unions and was interview on national television and in well-known newspapers. This of course had a very positive effect on the mobilisation for the demonstrations against Bush and war.

Demonstrations against Bush and war

The demonstrations began with a student demo on Wednesday morning in Vienna. Some 1200 students turned up. The police refused to allow the demonstrators to use the big streets in the inner city and directed them towards nearby residential areas. The demonstrators became louder and more militant with each passing minute. The demonstrators received solidarity from people living and working along the route of the demonstration, which inspired the students even more. A lorry driver honked and asked for a leaflet, and a taxi driver stopped and raised his fist.

Some hours later in Vorarlberg, the conservative west of Austria, another student demo against war and capitalism took place at the end of the school day. Some 200 students joined the demo which was organised by the Marxist led Socialist Youth. This was another important step along the road to building a strong Socialist youth movement in this region on the basis of Marxist ideas. 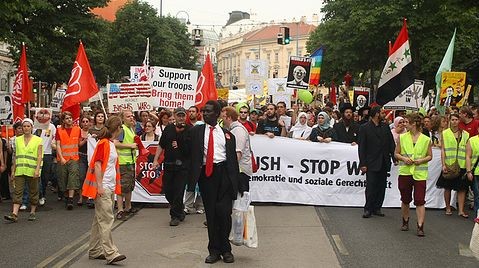 The highlight of this day of action was a mass demonstration later that evening in Vienna. The police estimate that some 15,000 people turned up for the demo. One can probably add some 5000 more to that figure. This is not much less than the big anti-war demonstration at the beginning of the war in Iraq in 2003. The Socialist Youth was a motor force in this mobilisation.

There were two left-wing alliances calling for this demo. The first called itself "Bush go home" and was formed by several "anti-imperialist" groups. There was (in parts justified) criticism that some of these groups had a very anti-American position. The second group, "Stop Bush", was led by the Socialist Youth and other left reformist organisations. This group had a very pacifist and reformist position. Their slogan was "for peace, democracy and social justice". The Marxist tendency Der Funke mobilised for this demo with its own slogans and a political appeal and tried to present a political alternative to these two alliances. Our slogan was a quotation from Georg Büchner, "Peace to the huts! War on the palaces!" By this we raised a class position and expressed that these demos could not only be a protest against one person or simply the phenomenon of war, but that they needed to raise an alternative to capitalism and the ruling order. Moreover we raised the idea of the need for a strong solidarity movement with the revolutionary movements in Latin America, because in countries like Venezuela a resistance against US imperialism has developed which really represents a revolutionary alternative to the capitalist system of exploitation and oppression. The "Hands off Venezuela" campaign was also present at the demo with a very militant bloc and impressive banners.

After the massive rally with Hugo Chávez in solidarity with the revolution in Venezuela and Cuba one month ago this was the second mass event organised by the anti-imperialist and anti war movement in Austria. Over the last two days thousands of ordinary people have learned important lessons about the character of this system and the state apparatus. This has radicalised a lot of people and given them a political consciousness.

All this has prepared the ground for the further work of the Austrian Marxist tendency in building a strong force within the labour movement and the youth.