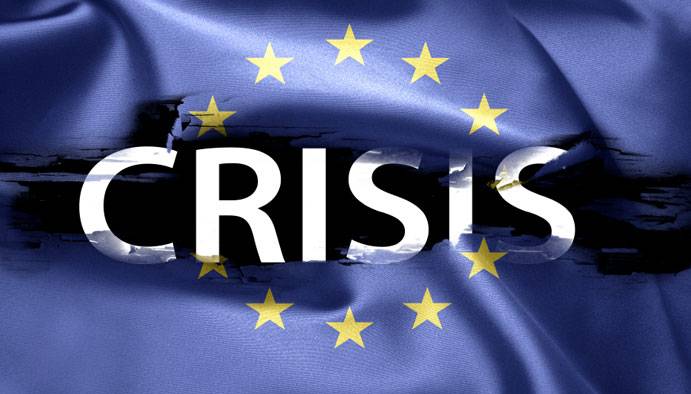 As the crisis of capitalism deepens, all that was once solid is melting to air. The European Union, designed to strengthen European capitalism against the crushing dominance of the world market, is now unravelling at the seams.

David Cameron, in a desperate attempt to hold his party together, has risked everything by allowing a referendum on EU membership. In doing so, he has set loose forces that are beyond his control – forces that could lead to an implosion in the Tory Party, whilst also providing a catalyst for the inevitable disintegration of the EU. All the chickens are now coming home to roost.

With British capitalism in a particularly parlous state, splits are emerging between different sections of the British ruling class. A section of smaller business owners, financiers, and City speculators see their salvation outside of the EU, which they see as a source of burdensome regulations and rules.

The dominant section of the capitalists, however, is keen to remain part of the single market, since the EU is the destination for the bulk of their exports. The ruling class also fears for their loss of “influence on the world stage” – in many respects already a fait accompli: Britain, in reality, has been a second-rate imperialist power for some time, reflecting the century-long decline of British capitalism.

The problem for Cameron is that the majority of the Tory rank and file – the “Little Englanders” – hate the EU, and want nothing to do with it. The Tories are therefore tearing themselves to pieces over the question of Europe. This has serious implications for the stability and future of British and European capitalism.

Seeing a haemorrhage of support to UKIP and under pressure from Tory backbenchers, Cameron took a massive gamble by allowing a referendum on the issue of Britain’s EU membership. With the Tories already weak from implementing years of austerity, they were desperate to hold on to this middle-England social layer, which provides the majority of their grassroots activists. Cameron thought that by obtaining certain “reforms”, he could cut across the Eurosceptic mood, and keep the party together. However, he has instead pulled at the thread that threatens to unravel his entire outfit.

Far from smoothing over the cracks within his party, Cameron’s “deal” was widely criticised for falling far short of his promises. As was predicted, the Eurosceptics would not be satisfied by anything short of full exit. Boris Johnson – the current Mayor of London – indicated his Tory leadership aspirations by stabbing his Etonian peer in the back and throwing his support behind the Out camp. Given Boris’ popularity and authority amongst Tory members and voters, this represents a major setback for Cameron’s In campaign.

Meanwhile, panic has set in on the financial markets. This reflects on the one hand fears that Britain may indeed leave the EU, and on the other hand, concern that the Tory Party is heading towards a split.

Johnson’s position has already spooked the money markets, with the pound falling to its lowest level for seven years. Bankers are warning that the current volatility of the pound is only seen in periods preceding deep crises, such as in the weeks before the collapse of Lehman Brothers in 2008. HSBC, one of the world’s biggest banks, stated that the uncertainty surrounding the referendum could “shave 1.5 percentage points off UK growth by the end of the year”.

Although we were told that the EU referendum campaigns would avoid the scare tactics seen in the Scottish independence referendum, such promises have been quickly blown out of the window. Within days of Cameron announcing his “deal”, he warned that leaving the EU could lead to “seven years of uncertainty”. Thirty-six CEOs of Britain’s largest companies rushed to echo this, by putting their names to a letter warning that Brexit would “deter investment”, “threaten jobs”, and “put the economy at risk”. Many other CEOs were reluctant to sign, out of fear their companies would face boycotts.

The panic is not simply limited to Britain, but is sweeping across Europe also. Even without the risk of a “Brexit”, the future existence of the EU is already on shaky ground. The Eurozone debt crisis continues unabated, despite the European Central Bank undertaking a Quantitative Easting programme involving the printing of trillions of Euros. The Schengen agreement – the free movement of people – one of the key pillars of European unity, lies in tatters following the erection of borders in response to the ongoing refugee crisis. With another deep world slump around the corner, these tensions will only multiply.

On top of this, European leaders were forced to contend with Cameron threatening a Brexit – a move that, if implemented, would set a dangerous precedent for other EU member states. Knowing that Britain’s departure could rapidly accelerate the EU’s disintegration, a series of minor concessions was agreed, in a desperate attempt to hold things together. Such blackmail by Cameron, however, has won him few friends in Europe.

The French newspaper Liberation said the deal risked a “dangerous spiral” for Europe, pointing to the risk that other countries will now try and negotiate their own concessions by threatening their own referendums. The Spanish paper El Mundo even criticised Cameron for “behaving like a true pyromaniac”. Although Cameron is not the ultimate cause of the crisis within the EU, his actions will certainty act to accelerate the death of the European project.

Having previously held their fire, the “gang of six” cabinet ministers - who have openly defied Cameron to support Brexit – went onto the offensive, dismissing Cameron’s reforms as having “little impact”. Michael Gove even called into question the legality of the deal, and Dominic Raab, a justice minister in the leave camp, said it “had less value than a guarantee for a new dishwasher”.

The heaviest blow, however, came from Johnson pinning his mast to the leave camp. As commented by the Financial Times, the combination of Michael Gove and Boris Johnson “will have a transformative effect on the Leave campaign — the airwaves will no longer be dominated by cranks, fruitcakes and Eurobores”.

As Cameron attempted to present his deal to Parliament, behind him a significant number of his own MPs were shaking their heads and muttering to each other. In this sour atmosphere, Cameron turned to openly mock Johnson, now his most dangerous rival; an indication of the bitter recriminations that threaten to tear the party apart.

“This is turning into a bloody disaster” a Tory MP reported to the Financial Times. “A week ago I thought we could hold this debate in a respectful way — I don’t think that’s the case anymore.”

Johnson had previously sat on the fence with regards to which side to take. Having seen the way the wind is blowing within the Tory Party, he only came out for leaving at the last moment. Despite being offered a senior cabinet position by Cameron if he supported the In camp, Johnson clearly sees that Cameron’s ship is sinking and spies an opportunity for a leadership bid in the near future.

If Cameron “loses” the referendum – that is, if Britain votes to leave the EU –it is unlikely that the leave camp would want him, a supporter for In, to lead the exit negotiations. If Cameron “wins” the referendum, he will nevertheless be deeply discredited amongst a majority of Tory Party members (who are for leaving), and potentially a majority of the MPs also. Already 150 Tory MPs (out of 330) have declared their support for exit; this figure is likely to grow as the campaigns heat up. In either case, the situation is pregnant with splits, alongside the possibility of a snap election before the end of the year.

Johnson, who is widely believed to secretly support staying in the EU, has therefore opportunistically lined himself up as a future leader, even if it means risking the stability of the Conservative Party itself and betraying the dominant section of the ruling class’ interests, which he is paid to represent. This is a reflection of the deep crisis of the British Establishment, which can no longer automatically count on the reliability of the Tories to maintain the stability of the system.

The crisis within the Tories could not have come at a worse time for the ruling class. The capitalist class requires a strong, united party in order to carry out the austerity that the system demands. Already, George Osborne’s programme of cuts will savage local authorities, leaving working class communities decimated. This is before the impacts of another world slump hit – a scenario that is clearly on the horizon, as demonstrated by the turbulence on the stock market and the slowdown in China. Already the Tories are weak, as shown by their U-turn over tax credits and their ongoing battle with the junior doctors. The backlash being prepared by workers and youth will destabilise them even further.

Jeremy Corbyn must therefore prepare himself and the Labour Party for such a perspective. In order to strengthen his support, he should go on the offensive against the Tories by bringing out the class issues at stake.

Corbyn correctly criticised Cameron’s “settlement” as a “theatrical sideshow”, arguing that “these negotiations have nothing to do with transforming a continent, but has everything to do with appeasing half the members of the prime minister’s own party”.

Rather than getting sucked into supporting either side of the capitalists in the referendum debate, Corbyn should present an independent class position – that of campaigning and fighting for a United Socialist States of Europe. Leaving the EU on a capitalist basis will solve none of the problems of the working class. Neither should we have any illusions that the EU - a bosses club that is breaking apart at the seams - will offer any future for workers and youth. Anyone in doubt of this should ask the workers in Greece, Spain, and Portugal, who are suffering from savage austerity as demanded by the EU institutions.

As the referendum approaches, the tensions within the Tories are likely to increase to fever pitch. Whichever way the vote goes, it will be extremely difficult to heal the wounds. Cameron’s authority within the party is in terminal decline. As the Tories tear themselves to pieces, the task of the Left is to strengthen Corbyn’s support in the Labour Party, in order to fight for a bold socialist programme. A socialist Corbyn government would act as a beacon to workers across the crisis-ridden EU. What is clear is that turbulent times are ahead.