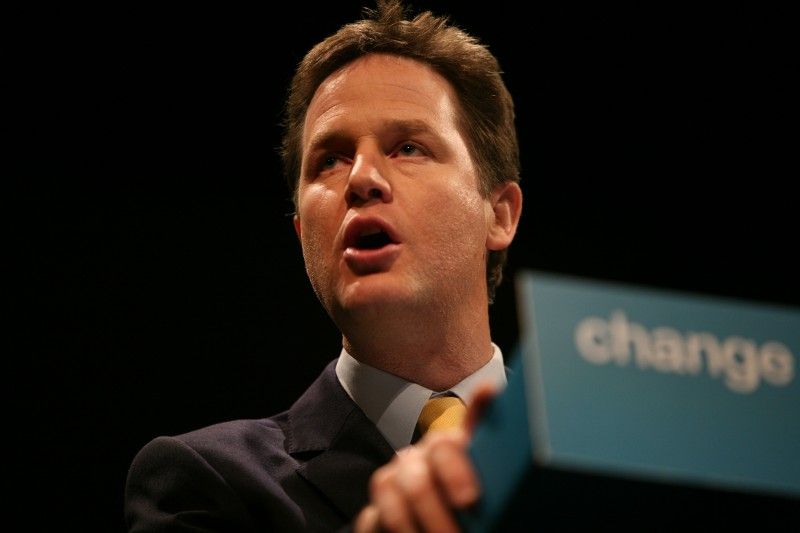 The Liberal Democrats are riding high in recent opinion polls. They are presenting themselves as something “new” and “clean”. A closer look reveals a very old party that has always carried out the policies dictated by the capitalist class of Britain.

The Liberal Democrats have always been a capitalist party. They still are. They claim to be new and different from the two main parties. In fact they have done centuries of abject service in Parliament for the rich and the capitalists. Now they still stand ready at the disposal of the ruling class, like the Tories and New Labour, to load the burden of the crisis on to the shoulders of the working class.

The modern Liberal Party has its origins in the cliques of bourgeois and aristocratic place-seekers who dominated the unreformed ‘rotten’ Parliament of the eighteenth century. They were then called the Whigs; their opponents were the Tories. Few points of principle separated the two gangs.

Gradually with the development of capitalism the Whigs became the party of the industrialists, while the Tories represented the landowners. The political issue in contention was free trade versus protectionism. While Britain was the workshop of the world the manufacturers favoured free trade, while the landowners called for protection against imports of grain. As the vote extended to the middle class and then to some workers in the nineteenth century the trade unions tended at first to support the Whigs, now renamed the Liberals, as the more radical capitalist party.

At the beginning of the twentieth century the organised working class split from the Liberals to set up their own party, Labour. The Liberals went into decline, partly because British capitalism began to face fierce competition from more modern capitalist countries, such as Germany and the USA. So the capitalist class rallied to the Tories and protectionism. The Liberals were squeezed between the parties representing the polar classes in society – Labour and the Conservatives. In the 1930s they played a squalid role as junior partners in a ‘national government’ of Tories and Labour traitors like Ramsay MacDonald. They helped carry through cuts in unemployment benefit and public sector pay to cut the deficit caused by economic crisis. Is that the shape of things to come? By mid-century they were seen as a sandal-wearing, lentil-eating political irrelevance.

So they are not a ‘new’ party, as Nick Clegg tries to kid us. But they have always been a capitalist party. There have since been a number of third party revivals that have benefited the Liberals. These revivals are a product of the disgust felt towards the two established parties, in particular by the failure of right-wing Labour to carry out a programme that would enthuse its working class support.

The most spectacular third party revival was the rise of the Social Democratic Party, founded in 1981 as a right-wing split from Labour. As the Labour Party moved left in revolt against the failures of the right-wing Labour government of 1974-79, arch rightwingers conspired to split the anti-Tory vote and to split the Labour Party as the main opposition to Thatcher. Their rise was meteoric. They were boosted by the media. Opinion polls at one time showed they had the support of 50% of the electorate. The bubble soon burst and in the 1983 and 1987 general elections the Social Democrats campaigned jointly with the Liberals, with the effect of splitting the anti-Tory vote and keeping Thatcher in office. In 1988 the two parties merged to form the Liberal Democrats.

What do the Lib Dems stand for? As the party leaders’ debate has shown there is a wide measure of consensus among the candidates. All agree that the British people must be made to pay for the economic crisis through years of cuts and austerity. Yet this crisis is none of their making.

TheLib Dems stand for proportional representation, since they lose out to the two established parties through the ‘first past the post’ electoral system. Clegg’s image hasn’t been dirtied by recent office and he comes across as new and fresh-faced compared with Brown and Cameron. Brown is a discredited and disliked figure as the Prime Minister in charge of a deep recession; Cameron hasn’t been able to carry out his professed aim of detoxifying the Tory brand from the monstrous image of Thatcherism.

Nick Clegg is personally from a privileged background. British papers have published pictures of the family chateau in south-west France. Early in his political career he was taken under the wing of Tory grandees like Lord Carrington and Leon Brittan. Only the lurch of the Conservative Party into euroscepticism deflected him from following the natural course of his career into the Tory party. For him, as for the ruling class, the Lib Dems were the next best thing.

Clegg denounces trade union backing and financial support for Labour. What is his alternative? His party, like the Tories, is financed by big business backers. Some of these, like some Tory supporters, are ‘non-doms’. That means that they are not recorded as living here (because they are dodging UK taxes), yet they presume to buy political influence with their tax-free cash. Does that sound ‘fresh’ and ‘clean’? 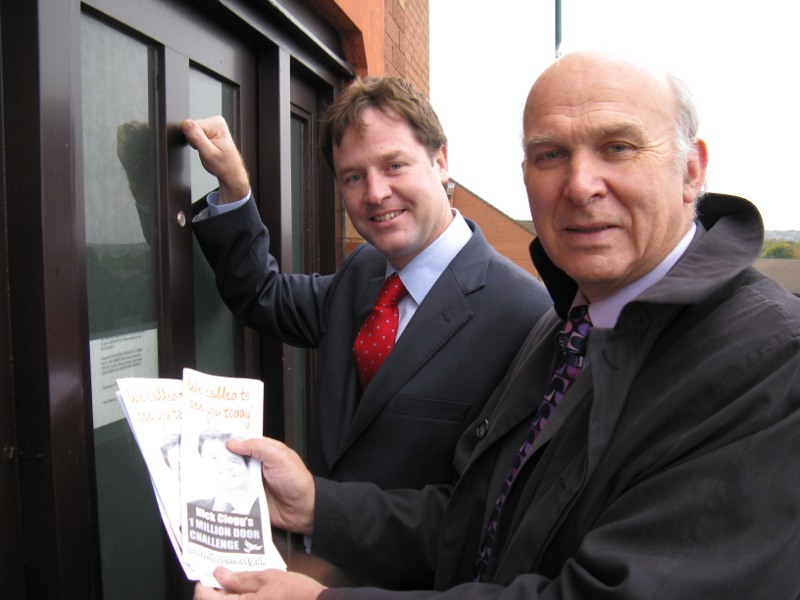 Upbeat Clegg and Cable knocking on doors. Photo by Anders Hanson/ Liberal Democrats. Clegg and his Party offer no alternative to the orthodoxy of austerity pushed by New Labour and the Tories. Nick Clegg promised, at his Party Conference last year, bold and even "savage" cuts in government spending that he claimed would be necessary to bring the public deficit down after the next election. Clegg set out plans including a long-term freeze in the public sector pay bill, scaling back future public sector pensions, and withdrawing tax credits from the middle class. He is even prepared to examine means-testing universal child benefits.

The Lib Dem election manifesto talks about, “Tough choices needed to cut the deficit.” They promise to cut spending by $10bn a year. This has set off a sort of contest between their leaders as to who can promise to inflict the most pain on the British people. Vince Cable, the Lib Dem Treasury spokesperson said the cuts would have to be even bigger than the £10 billion a year in the manifesto. He went on: “There is more to be done. I fully appreciate this isn’t enough. We have to go beyond that.”

Like the other two main parties, their figures don’t add up. All the parties are deliberately vague as to the scale of the horrors they will inflict while they are still appealing for our votes. But the Lib Dems are quite clear that they will cut working class living standards and public services by as much as it takes to restore the bosses’ profits.

Cable is also trying to claim some credit for warning against the buccaneering follies of unregulated finance capital and predicting the present economic crisis. This is the opposite of the truth. In 2006 he denounced “the current clamour for regulation of financial products.” Sucking up to the City he called for a “lighter touch” in financial rules.

So the Lib Dems are up for cuts, as much as the ruling class needs. How can we prove that? What they are contemplating nationally is what their supporters are already carrying out at a local level. In Birmingham the Lib Dems are currently in cahoots with the Tories. They propose savage cuts to deal with the council deficit of £26m. On top of 800 jobs already shredded they propose that 2,000 more should go this year. This is the real face of the Liberal Democrats. They are doing exactly what the boss class wants.

In many solidly working class areas the Tories are so widely hated that they never had a realistic prospect of getting more than a handful of seats on the council. So the opposition to Labour has been taken over by the Liberal Democrats, who are really Tories in yellow rosettes. As an opportunist capitalist party, they take on whatever colouring is convenient to win support and office. For instance leaflets from the Lib Dems in Holborn and St Pancras cry, “Stop arming Israel Now”. Holborn has a large Muslim population. Nearby in Kilburn and Hampstead the local party boasts that Clegg attended an event sponsored by Jewish News. This, of course, is intended to go down well with the local Jewish population. Famously the Liberals who ruled Tower Hamlets in the 1970s flirted with racism and the far right National Front.

Blairites whisper that the creation of a hung Parliament (on account of the failure and unpopularity of New Labour as the ruling party!) would mean the culmination of their ‘project’ to sink Labour’s political identity into a merger with the Lib Dems, an outright capitalist party. So, far from being a way forward, that would take us back to the nineteenth century. It would neuter Labour as a force for radical change.

Far from being a fresh face in politics, the Liberal Democrats are Tories in all but name. Far from being new, they are the old discredited face of Tweedledum and Tweedledee politics that the workers turned their backs on when they took the historic decision to set up a Labour Party to represent their own class interests. Class is the defining feature of British politics. The Tories and the Liberal Democrats are prepared to make cuts because that is what the capitalist class needs. It is a disgrace that the Labour Party has also been captured by pro-capitalist politicians. The solution is for workers to drive them out and reclaim Labour as a working class party with a socialist programme.