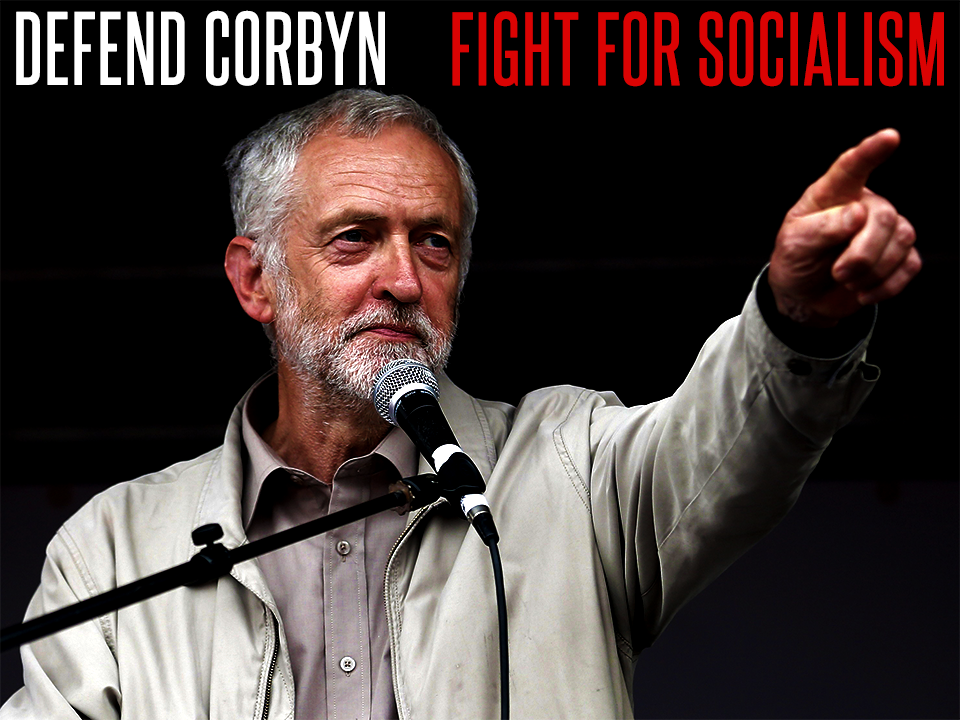 Jeremy Corbyn is on target for a landslide victory in the election for Labour leader. According to all the polls, he will defeat his right-wing supported challenger Owen Smith by a wide margin. In fact, the support for Jeremy Corbyn amongst the grassroots of the Party has increased since last year; over 84% of local Labour Party leadership nominations have been for Corbyn, compared to under 40% in last year's four-way race.

This rising support has also been reflected in the gains for the Left on Labour’s National Executive Committee, where two right wingers were replaced by two Corbyn supporters in this summer's NEC elections. While ordinary Labour members were jubilant, anti-Corbyn MPs were down in the dumps over this, with one almost in tears: “This is very, very, very bad news.” Poor old Neil Kinnock, all dressed in his Lord’s ermine, said, “Only anger is keeping me from falling into despair.”

After months of bitter civil war in the Party and the vote of no confidence by right-wing Labour MPs against Corbyn, this cabal of MPs threw everything into a coup to try and oust him as Party leader. When that failed, Owen Smith was chosen to stand against him as the "unity" candidate. Such euphemisms are akin to the "Ministry of Love" from George Orwell’s 1984.

Smith has been forced to put on a “left” face - as Neil Kinnock did in the past - if he was to have any chance. This "radical" challenger laughably denied that he had nothing to do with the “coup” against Corbyn, although John Mann MP let the cat out of the bag to the contrary. Smith's “goody-two-shoes” denials have fooled no one. He is rightly seen as nothing more, nothing less than the Blairite-backed "Anyone But Corbyn" candidate.

The right wing are in the doldrums; they have lost control over the Party. They regarded Labour as their own private property - a vehicle for their careers. These “upwardly mobile” ladies and gentlemen became more and more like the Tories. They are proud to be part of the Establishment. They grovel at the feet of big business and have contempt for the working class, while sneering at “socialism” as being “out of date”.

The Corbyn victory last year threatened their way of life. Their careers, perks, fat salaries and privileges were all at risk. The message from these people has been clear: how dare the rank-and-file members defy us! This upstart has to go!

The Blairite campaign to discredit Corbyn began on day one (indeed, even before day one) and has had the full backing of the ruling class. “He was simply a ‘protest’ politician and unfit for Government”, they screamed. “He could never win an election”, said the expert Lord Kinnock, a man who lost two general elections in a row. “He is a nice man, but not a leader”, they pleaded.

But all these protests have been in vain. Hundreds of thousands have rallied to Corbyn as someone who represents a real alternative. The right-wing carpetbaggers have been discredited, with their Tory-lite policies, defence of Trident, and support for foreign wars. The membership have turned their back on this old establishment.

Can the real democrats please stand up?

Of course, these so-called “democrats” will not accept the expected result in September. “Why the hell did we give one member one vote?” they already mutter in private. The members have gone mad and lost confidence in the Parliamentary Labour Party, they moan. The PLP right-wingers must have recalled the ironic words of poet Bertold Brecht when he said, during the mass protests in 1953 against the government, that the leaders of the East German Stalinist Party had lost confidence in the actions of the masses - the people should therefore be “dissolved” and a new one elected!

The Blairites will say they were cheated by “threats”, “violence” and “intimidation”, which has forced the Labour bureaucracy to close down all local Party meetings. Of course, this had nothing to do with stopping Corbyn getting even more support, so they say! If they were concerned about “intimidation”, why did they not close down the bear-pit of the Parliamentary Labour Party last year when there was real intimidation against Corbyn?

Now they are plotting to split the Labour Party, as in 1931 and 1982. They are preparing their excuses in advance, with the help of cuddly Tom Watson, the deputy leader. “I’m under no illusions about what’s going on”, he said. It is Trotskyist “infiltration” that is apparently “manipulating” innocent people. What utter nonsense!

Watson - elected on promises to increase party democracy - is now proposing to bring back the old electoral college for choosing the leader instead of letting the members vote. He wants the right-wing PLP - not the elected Party leader - to choose the Shadow Cabinet. So much for our “neutral” deputy leader, who has constantly worked behind the scenes to get rid of Corbyn. Even Len McCluskey of Unite the Union described Watson's actions as an “act of sabotage”.

Kick out the Blairites! Kick out Capitalism!

The only way forward now is to bring back mandatory reselection of Labour MPs. There is a clear growing support for this. All Labour MPs must face the democratic vote of the membership. That is what democracy really looks like! We need representatives at Westminster who are in tune with the wishes of the rank and file and are ready to defend the working class, not the vested interests of capital.

Of course, this must go hand in hand with the adoption of real socialist policies. The Labour Party was hijacked by Tory infiltrators (the real “entryists”), who wanted not to change society but to support capitalism. These careerists were (and still are) growing rich at the expense of working people. They have had their snouts firmly in the trough for years. Why would they want to change society when they are doing so nicely? They were, and are, part and parcel of this rotten Establishment. We need to clear out this riff-raff!

The big business system of capitalism is a disaster. The rich are getting ever richer while the working class has been getting less and less of the cake for decades now. While FTSE100 company bosses award themselves £500,000 increases per year, millions of working families are only just getting enough to cover their rent and food bills each month. Even then, most can only survive on tax credits and housing benefit - a state subsidy to the bosses for paying poverty wages. As former boss, Adair Turner put it, the job market is starting to resemble “a feudal marketplace in which the lord shows up each day and says, ‘I’ll take you, and you, and you’.”

And things are about to get a damn sight worse. The British economy is sliding into recession and there is a massive banking crisis looming in Europe. This could easily tip the whole world economy into another slump - even worse than in 2008.

Vote for Corbyn! Fight for Socialism!

We must restore the Labour Party’s commitment to socialism. After decades of right-wing control, things are now going into reverse. A future Labour government must not try to run capitalism better than the Tories, which would be a disaster. It should pledge instead to reverse all the Tory cuts and austerity and take measures to massively increase living standards. That is the only way to fight the Tories!

This will mean that Labour in power must take over the commanding heights of the economy - the top 150 monopolies, banks and insurance companies that dominate our lives. These must be run under workers' control and management as part of a socialist plan of production, so we can use our resources for the benefit of all. That was the basic socialist aim of Clause 4 of the Labour Party constitution - a clause that was abolished by Tony Blair and his gang, and replaced with pro-business rubbish. This historic commitment must be restored to its proper place.

Only this basis, by offering a bold socialist programme to transform the lives of ordinary working people, can Labour win a landslide victory and make real the dreams of past generations.