Greece
Share
Tweet
Yesterday Greece was shaken by a massive general strike, the third in three months. An extremely militant mood is developing among the Greek workers. This is also being reflected in a sharp swing to the left in all recent polls. In particular, the Synaspismos, which stands to the left of the PASOK, is making big gains.

Yesterday was another day of terror for the Greek capitalists and their New Democracy government. The whole economy was paralysed by a 24-hour general strike, the third in three months, called by the Greek Confederation of Workers (GSEE) and the main union of the Public Sector Workers (ADEDY). 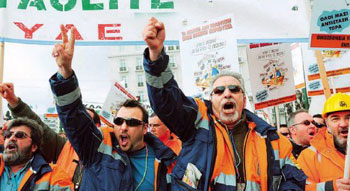 The 24-hour general strike came after three weeks of a militant struggle of the workers in the public sector, especially of the Greek Electricity Company (DEI) and of the municipal workers. As a result of this heroic all-out strike the situation in the cities and towns of Greece became one of an open challenge to the capitalist establishment, with tons of rubbish piling up on the streets and power cuts for many hours at a time.

Participation in the general strike was massive, with about 150,000 workers demonstrating in dozens of rallies all over Greece. In Athens between 100,000 -and 120,000 workers demonstrated in the two strike rallies. In the GSEE rally 80,000 to 85,000 workers took part and 30,000 to 35,000 attended the PAME rally (the Communist Party front in the unions). The main demand of the general strike was for the withdrawal of the government's counter-reform of the social security system.

The Karamanlis government with its new law on pensions is abolishing the right of working women with very young children to retire at 50. The government is also bringing all the different pension funds together into one unified fund and through this "trick" is reducing the level of pensions and increasing the number of years that hundreds of thousands of workers have to work before they can retire.

The slogans that dominated the strike rallies were "Struggle till the end", "Resistance and struggle with the unions", "Your law for us is a piece of paper". Unfortunately, and in spite of this militancy, it seems that this great movement will not succeed in stopping the government from passing of the new reactionary law through parliament. Today the government will vote it through parliament, probably without any abstention or refusal to vote on the part of any of the 152 New Democracy MPs.

The reason for this is to be found in the tactics of the trade union bureaucracy. Although the workers have proved several times their willingness to fight the trade union leaders have not built on this. They did not step up the mobilisations after the first massive general strike of December 12 , nor did they develop any concrete plan of struggle.

After December 12 the GSEE leaders called two further 24-hour general strikes (on February 13 and yesterday) with one month of a so-called "period of peace" between one and the other. And yesterday's general strike came just one day before the new law was to be discussed in parliament.

So, although the trade union leaders had all the time they needed to organize a victorious struggle - they let two or three months pass from when the government first announced its plans ‑ they failed to organize a struggle with concrete results for the workers. Their tactic was not one of seeking a road to victory, but one of creating an excuse for the defeat, so that they could the turn to the workers and say, "the leaders did their duty but the democratically elected government (conveniently forgetting that the 51 % of the people voted for the workers' parties) was intransigent".

Spectacular turn to the left

This general strike was one more very clear expression of the accelerating process of radicalisation of Greek society. Yesterday's general strike came just after the publication of a series of opinion polls that reveal a major change is taking place in traditional voting patterns. The two main parties, PASOK and New Democracy, that have governed Greece for the past thirty years, are being hugely affected by this. The recent opinion polls put ND at only 27%, just 5 months after its electoral victory when it got 41,85%. PASOK stands at 22%, down from the 38,1% it received in the national elections!

The electorate is turning sharply to the left. The KKE (Communist Party) appears to be holding on to its 10-year high that it won in the general election, standing at 7.5-8%. But the big surprise in the opinion polls is the dramatic leap in support for the Synaspismos under its new president Alexis Tsipras.

All the opinion polls are showing that "Syriza" the electoral front based on the Synaspismos would win 17.5-18.5%! (Syriza is made of the Synaspismos together with some small Maoist and ex-"Trotskyite" organisations and groups). Syriza came fourth in the recent national elections with only 5% and now it seems it has leapt 13 percentage points in just five months!

What is very impressive is the fact that Syriza appears to be attracting many votes not only from PASOK but also from ND. Ten per cent of ND voters have stated that they would vote for Syriza. The motor force behind this growing support for Syriza is the youth. Among voters who are 18-35 years old Syriza stands at about 30% in the opinion polls, overtaking the PASOK in that age group.

The growing support for Syriza within Greek society has a concrete explanation. After the constant turn to the right on the part of the PASOK leadership over the last 15 years, a big vacuum on the left was created within Greek society. In a period of continuing attacks on the part of the bourgeoisie, the new generation of workers does not have any memory of a left-wing PASOK.

The left reformist phraseology of the Synaspismos leaders in a period when the PASOK leaders insist on maintaining their "neo-liberal" programme is having the effect of winning the support of the younger layer of workers. These new radicalised workers and youth are also very critical of the Communist Party, because of the sectarian splitting tactic of its leadership within the labour movement and its total identification with the Stalinist political and social model.

All this explains why the radical left language of the new president of Synaspismos Alexis Tsipras, together with his image of being a young and imperishable leader - he is only 34 years old - is attracting huge support for Syriza. With a monolithic Stalinist leadership of the KKE on the one side and a pro-bourgeois right-wing leadership in PASOK on the other side, the young and very good speaker Alexis Tsipras is more attractive for hundreds of thousands of workers and youth. On this basis as each day passes Syriza is becoming "the new hope on the left" after many years of in which right-wing ideas have dominated mainstream Greek politics.

The Greek bourgeoisie is in complete disarray. With the Left gaining ground and the ND in a "free fall", they are having to abandon the idea of "strong" right-wing bourgeois governments and are beginning to look at other possible future scenarios which would involve bringing the reformist leaders of the workers' parties into government.

Every day in the bourgeois press we see two possible future scenarios. The first ‑ and more favourable for them - would be a coalition between the ND and the PASOK, like the "grand coalition" in Germany. The second scenario, but less popular among the bourgeois, would be a PASOK-Syriza coalition, but with a programme similar to that of Prodi's centre-left government in Italy.

The PASOK leadership is considering both scenarios, but under the pressure of the labour movement, it officially announced in the recent congress of the party that it is in favour of the second option. The Synaspismos leadership is divided over the question of a forming a government with the PASOK. The right wing (which controls about 30-35% of the party) supports this idea enthusiastically, but the left wing (65-75% of the party) with Alexis Tsipras as its representative, officially rejects this option "so long as the PASOK keeps its present neo-liberal programme".

The spectacular growth of the Synaspismos has also produced symptoms of crisis within the KKE. In the KNE (Greek Communist Youth) two weeks ago we witnessed a wave of expulsions of leading cadres for "anti-party behaviour". In reality what these cadres did was to commit the "great sin" of putting into question the sectarian tactics of the party leadership within the labour movement and its two-stage programme for "socialism in one country".

Under the present conditions of sharpening of the class struggle and of a massive turn to the left within Greek society, the Marxists that produce Marxistiki Foni are building their political links with the rank and file of KKE and Syriza, and patiently explaining that there is no other road for the victory of the workers' struggle other than the unity of the workers of all the workers' party (PASOK, Synaspismos and KKE) in the struggle against the bourgeois attacks and for a left government resting on the working class and poor people of town and countryside, not with an abstract "anti-neoliberal" or "anti-imperialist" policy, but with a clear socialist programme.