Share
Tweet
In January, Chavez said he defended the line of Leon Trotsky's theory of the Permanent Revolution. But how does this theory, developed in 1905, relate to what's happening in Latin America at the present time? Yesterday 40 people packed the NUJ Headquarters in London to find out. Alan Woods, author and editor of the In Defence of Marxism website was invited to speak at the Hands Off Venezuela meeting to explain the theory and it's relevance today.

In January, Chavez said he defended the line of Leon Trotsky's theory of the Permanent Revolution. But how does this theory, developed in 1905, relate to what's happening in Latin America at the present time? What does this theory have to offer the people of Venezuela? Yesterday 40 people packed the NUJ Headquarters in London to find out. Alan Woods, author and editor of the In Defence of Marxism website was invited to speak at the Hands Off Venezuela meeting to explain the theory and its relevance today.

"First of all, let me tell you what the Permanent Revolution is NOT: It is not, as some imagine, a revolution all the time! Of course that's nothing to do with it... This marvellous scientific theory explains that in backward un-industrialised countries with a small working class and a large peasantry, under modern conditions, the historical tasks of national democratic revolution CANNOT be achieved under capitalism." 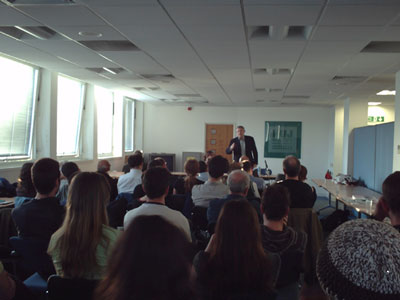 "What are these tasks?" Alan continued, "the first task is independence from foreign rule and imperialism. The second is to carry out an agrarian revolution, the break-up of the big feudal estates, giving land to the peasants. The third task would be democracy, and the fourth task would be the modernisation of the economy."

"It's been 200 years since Simon Bolivar. What has been resolved? NOTHING has been resolved. In a continent that possesses all the necessary materials to create a paradise on Earth, after 200 years, capitalism has reduced Latin America to a living hell for the majority of its inhabitants. Therefore I think we're entitled to say, that the bourgeoisie, the capitalists, the landlords and the bankers of Latin America have had all the opportunities they require to show what they can do. The same in India, same in Pakistan, same in Bangladesh... In two centuries, the bourgeoisie have proven they are not able to solve the problems of the workers and peasants, or the middle class or the students or the women, or the indigenous or the blacks, in any single country of South America."

"The position of this toothless colonial bourgeoisie, is impotent because it was born too late. These capitalists are linked to the landlords. They have land. The landlords have shares. They marry into each other's families. They're linked. So how is this bourgeoisie going to carry out agrarian reform? Are they going to carry out a revolution against themselves? It's nonsense! The second point is that in every case in question they are dependent on foreign capitalism. They are dependent on foreign investment. They are in the pockets of imperialism which is why they cannot achieve genuine national independence. And therefore, the only way these tasks can be achieved, is by the working class taking power with it's natural allies; the poor peasants, the urban poor, and other oppressed and exploited sections."

Alan went on to explain that the revolution in Venezuela is not complete. 75 percent of the land still remains privately owned by a few rich families. The counter-revolutionary forces are still there. They are still active in the state, at quite a high level. "This is dangerous stuff. The revolution is not irreversible and cannot be irreversible until at the very minimum, the landlords are expropriated" concluded Alan. "The Theory of the Permanent Revolution is a most wonderful, profound and true theory, which if you have not understood it you will never understand the processes that are taking place, of the revolutions in Africa, Asia and Latin America for the last 80 years... Surely if anyone wants to understand what's happening in Venezuela, and what president Chavez is saying we should study what Trotsky said and what The Permanent Revolution is."

His talk was followed by a short discussion where people intervened and asked questions from the floor. Alan then summed up and said how a balance between action and discussion was very important. He finished by appealing to all those present to join Hands Off Venezuela to help build the campaign.