Alan Woods' successful speaking tour to launch Reformism or Revolution. Marxism and Socialism of the 21st Century arrived in San Cristobal, capital of 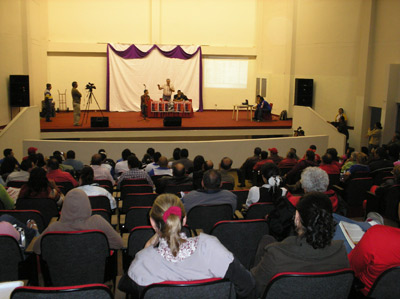 The first impression one gets from the plane of this agricultural state on the border with Colombia is that of an immense garden of green valleys and mountains, irrigated by the strong red of the Torbes river, known as the red river because of the colour of its waters. A fertile land, of lush vegetation, which could be a paradise of wealth and prosperity but which - under the rule of the Venezuelan and Colombian oligarchies - has become a nightmare for the masses: poverty, unemployment, cronyism, hit men (there is a growing presence of paramilitaries in this state and they are used to kill militants and social fighters).

Weather problems and the poor state of the infrastructure - the result of decades of neglect, lack of investment and parasitism on the part of the ruling class - nearly prevented the meeting from going ahead. Half an hour before the meeting was supposed to start, the flight on which Alan was coming from Caracas had not even left Maiquetía airport. Air traffic to Táchira was cancelled due to intense and heavy rain. Finally, the meeting, planned for 4pm, could only start at 7pm. However, the interest in listening to Alan and the enthusiasm for the ideas he has been explaining are such that, despite all these difficulties, the 250 people who filled the "Ali Primera" Auditorium in Pueblo Nuevo, decided to stay until his arrival.

This is even more significant because a large number of them were peasants, youth and workers coming from different parts of the state, some of them having travelled more than an hour and a half to get there. There were people present from San Antonio del Táchira (less than 5 minutes from the border with Colombia), Colón, Cordero, Capacho, San Cristóbal, Táriba, Palmira, Rubio, San Posesito... In some cases, these comrades had to organize their own buses to go to the meeting. There was a noticeable presence of youth: students from the National Experimental University of Táchira (UNET), the National Experimental Armed Forces University (UNEFA) and the Táchira campus of the University of Los Andes (ULA).

During the three hours of waiting, with doubts about whether the meeting would eventually take place, the music band Tepuy played a varied repertoire of popular revolutionary songs. Comrades Leonardo Badell, from the Editorial Board of El Militante - Marxist voice of the PSUV, and Freddy Acevedo, a CMR member who sits on the Regional Bureau of the PSUV, had already spoken talking about the decadence of capitalism and the relevance of the ideas of Marxism. Freddy was one of the 69 candidates proposed by the rank and file, and ratified by president Chávez, who stood for the National Leadership of the PSUV. Defending a Marxist programme he received 9,000 votes, 3,000 short of being elected (the most voted candidate received 31,000) and received the fifth highest vote in the election for the Táchira Regional leadership of the party.

The arrival of Alan Woods was welcomed by the audience with a long and warm applause. The British Marxist started the meeting summarizing the situation of capitalism internationally, the crisis in the US, the attacks on workers' rights in all countries, including the most advanced capitalist countries, the extension of poverty while a small group of parasites concentrates all the wealth in their hands.

"You would have all heard of the Holocaust, when Hitler and the Nazis assassinated six million Jews, and not only Jews, trade unionists, workers and peasants, socialists, communists... Well, every year, on this planet, eight million people die of hunger. Capitalism every year organizes a silent holocaust about which nobody says anything. According to the International Development Bank, the rise in the prices of food will push 26 million people in Latin America into extreme poverty. And do you know what is most enraging about all this? That there is the productive capacity in the world to prevent this, but it is not used for one reason alone: private property of the means of production."

Alan, as in previous meetings, explained the living conditions of the masses on the continent and in Venezuela itself, the nightmare that life has become under capitalism for millions of men and women. He also explained how the Venezuelan revolution could be an answer to this situation if it were completed. "Your revolution is a point of reference for the exploited of the world. That is why imperialism and the capitalists will never accept it and will do everything in their power to destroy it."

Answering those who have illusions that US imperialism, if Obama wins the election, will change its attitude towards Venezuela, Alan said: "I have no trust in Obama. As the great American writer Gore Vidal says, ‘in the US there is only one party of Big Capital with two right wings'. However what is happening in the US is significant, with the masses voting for a black man. When his voters are asked why they support Obama, they reply: ‘Because we have had enough and want change'. This is the situation in the US and in the whole world. The masses, the workers, are sick and tired and want change."

"This means," added Alan, "that the workers in the US, in Europe and around the world, and of course, above all the workers of Latin America, in the Patria Grande, are your allies. They are your only allies, not the bourgeois governments which will not hesitate in attacking the revolution!" 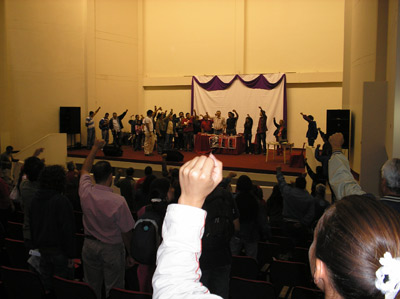 Comrade Alan made an appeal to struggle for a victory in the November 23 elections. "The masses have to be mobilized to win the elections on November 23. As many votes as possible need to be won for the PSUV. There is a lot at stake! But in order to achieve this we need to analyse why we lost the constitutional reform referendum. They did not win, we lost it because after 10 years of revolution there is still poverty, unemployment, scarcity, inflation... and this undermines the morale of the masses. Only by putting an end to the power of the oligarchy, nationalising under workers' control the resources which are created by the work of the people but controlled by the capitalists, only in that way will it be possible to democratically plan the economy and solve these problems."

The people, the working class, they are the only guarantee for the Bolivarian revolution to complete its tasks and achieve a decisive victory". These words were received with thundering applause by the audience.

Alan finished his intervention by explaining that the revolution can only become irreversible by expropriating the capitalists, nationalising the banks, the land and the latifundia under workers' control and building a workers' state. He also outlined Lenin's four conditions for a genuine workers' state: election and right of recall of all public officials, no official to receive a wage higher than that of a skilled worker, to progressively rotate all bureaucratic tasks and to replace the bourgeois police and regular army by the people in arms. Many of those present hailed every one of these proposals as they were being made.

The meeting ended with the audience standing, raised fist signing The Internationale, the anthem of the world working class. This was an historic meeting in Tachira, a state that for decades had been dominated by the right wing through repression and cronyism, and which, now that it has been awoken by the Bolivarian revolution, will not allow itself to be gagged again by the oligarchy without offering serious struggle.

Dozens of peasants and workers, before starting the journey back to their towns, queued by the rostrum to get Alan to sign their copies of Reformism or Revolution. Those who were left without a copy of the book wanted one of the posters that the comrades of the Revolutionary Marxist Current (CMR) in Tachira, had produced announcing the meeting. Several had to leave early because of the late hour which meant they risked being left stranded with no means of transport back to their towns, but thanked the organisers of the meeting. "Alan gives voice to what we workers and peasants think," said one of the comrades. One of the comrades who had participated in the organisation of the meeting was asking: "Alan, tell the president that this is what the people think, his people. Explain to him our suffering." 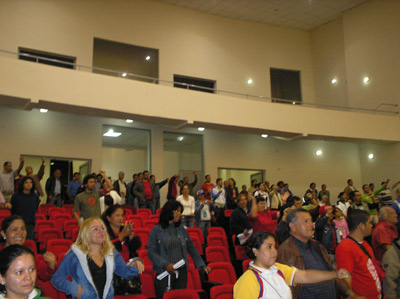 "They say that San Cristobal is an opposition escaulido city, because the opposition wins, but if what Alan says was carried out, the revolutionaries would win. One must go into the neighbourhoods, to walk in the towns and the working class areas, and less on the carpets of the offices and ministries. The problems of the people must be solved and not be forgotten as is the case with many of those we elected as mayors and governors". Amongst those present there were many of Colombian origin. One explained to us how, after suffering brutal repression at the hands of the oligarchy and the paramilitaries, the Venezuelan revolution had become a beacon of hope for the oppressed in Venezuela and Colombia. "But the revolution is now threatened by a fifth column. The ideas that have been explained here are a source of inspiration for all revolutionaries, a call to organisation and struggle."

This was a confirmation of the firm commitment to struggle that one could feel in the air and which was reflected in the sale of political material and books in the stall of the Táchira Revolutionary Marxist Current and in the 80 people who left their details to join the CMR.