The 21st congress of Sinistra classe rivoluzione, the Italian section of the International Marxist Tendency, took place on 5-7 December. Restrictions due to the pandemic forced us to keep it online. Far from preventing a large number of participants, these conditions facilitated an exceptional turnout of 94 delegates, and around 200 guests from over 40 cities.

On the first day, Fred Weston, representing the International Secretariat, introduced the discussion on world perspectives, which also saw interventions from 18 delegates, alongside a video intervention by Alan Woods: the IMT’s lead theoretician. We are facing the most serious crisis of capitalism in its history: deeper and broader even than that of the 1930s (which many compare to the current situation). Capitalism has now penetrated every corner of the planet and is at a point where, failing to overcome its contradictions, it is suffocated by them. The system was already on a precipice before 2020: any accident could have triggered this very deep crisis. The trigger ended up being the coronavirus pandemic, which today is increasingly becoming a political factor of enormous importance. This is an example of necessity being expressed through accident. 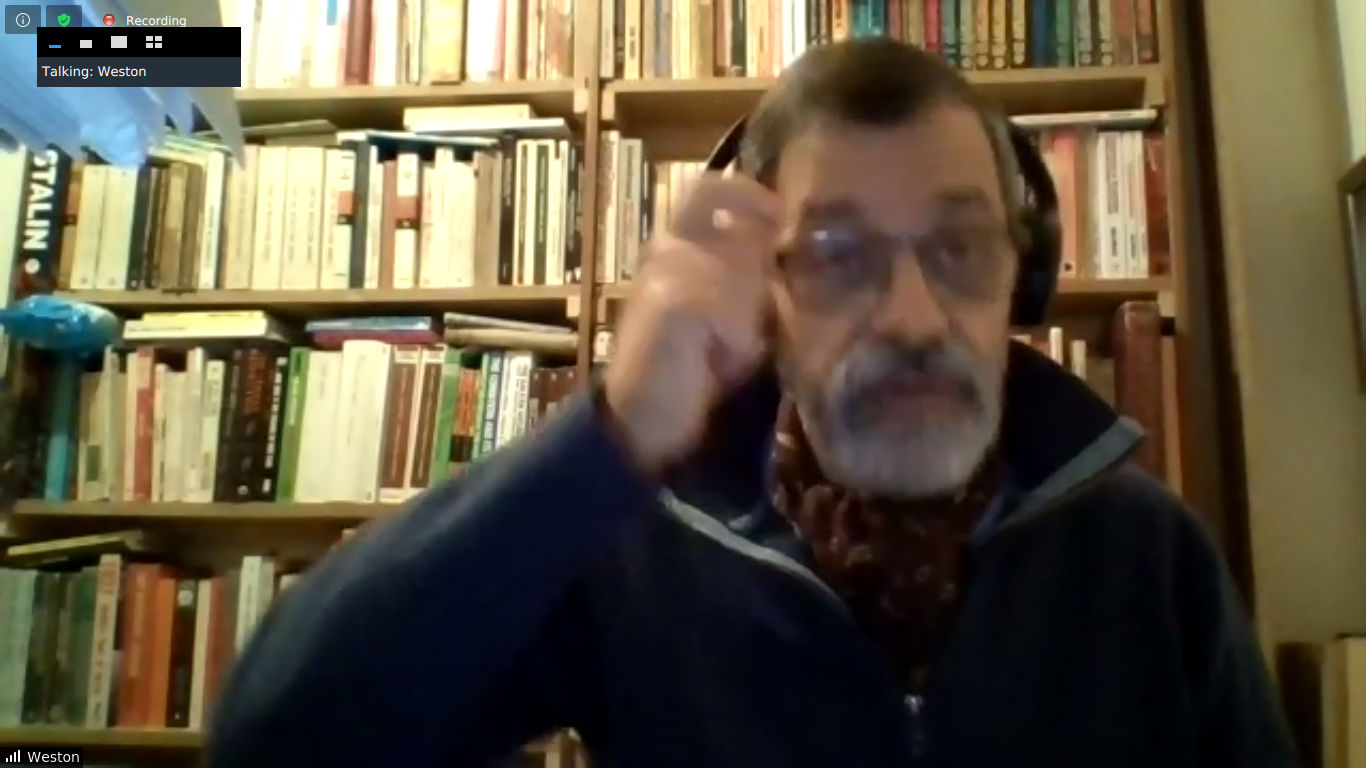 Meanwhile, the relative decline of the United States continues. China has gone from a factor of stability to one of instability. To continue growing its economy, it exploits the weaknesses of other capitalist countries and prepares for the emergence of new conflicts. The confrontation between China and the United States, the fundamental conflict of our time, is far from being resolved with the election of Joe Biden. Rather, a clash is destined to crystallise under the Biden administration, with decisive repercussions on the European Union: the first candidate for a US-led anti-Chinese coalition.

The euphoria with which the recovery fund has been met is temporarily covering up the contradictions gripping Europe (which are nevertheless already beginning to appear below the surface-level illusions of a possible step forward towards building a common European policy). States are intervening massively in the economy, accumulating debts at all levels. The idea of ​​being able to repay these debts with rapid growth after the emergency is over is revealed as pure utopianism in the face of data, which indicate a substantial block on investments and a gigantic collapse in productivity. Another bomb is preparing to explode around the Brexit issue, against which the European bourgeoisie have been banging their heads since the fateful referendum in June 2016. The prospect of a no deal is far from averted, which raises the prospect of an impending disaster.

The bourgeoisie is losing its grip on the tools with which it controlled the system. Its traditional parties in power are giving way to new parties and movements that have shattered the veneer of stability that has freed the ruling class to impose its will for decades. Characters like Trump, Bolsonaro, Boris Johnson on the one hand; and Jeremy Corbyn and Bernie Sanders on the other, have alarmed the bourgeoisie around the world. Biden's election, and the attempt to regain control of the Labour Party through Keir Starmer's leadership, allow them to breathe a sigh of relief. The truth, however, is that the period opening up before us is one of class struggle and revolutionary upheavals! We already had a taste of this before the pandemic, with struggles in Nigeria, gigantic strikes in India, movements with an insurgent character in Latin America and the Middle East... In the midst of the health emergency, the inspiring Black Lives Matter movement forced the president of the United States to take refuge in a bunker under the White House. The protesters set fire to a police precinct in Minneapolis, with the approval of the majority of Americans. And, again, the mass demonstrations in France in recent days in reaction to Macron's security law and the brutal beating of a black producer by the police, demonstrate one fundamental thing: episodes that have always resulted from the barbarism of this system emerge today in a different context, and generate a different, mass response!

On the second day, comrade Alessandro Giardiello opened the session on the Italian political situation, with 30 comrades taking part in the discussion. The picture illustrated by Alessandro is that of a "country falling into poverty". He described millions of people living off odd jobs, workers laid off, families forced to spend their savings, collapsing incomes and accumulated stress. With the end of the redundancy freeze we will see a "tsunami of unemployment". Meanwhile, the Italian bourgeoisie reveals its parasitic character, asking for everything and more (loans, guarantees, non-repayable investments) and responding to the crisis with a further centralisation of industrial and banking capital. Once again, we see the process described by Marx of "accumulation of wealth at one pole and accumulation of misery (..) at the other". 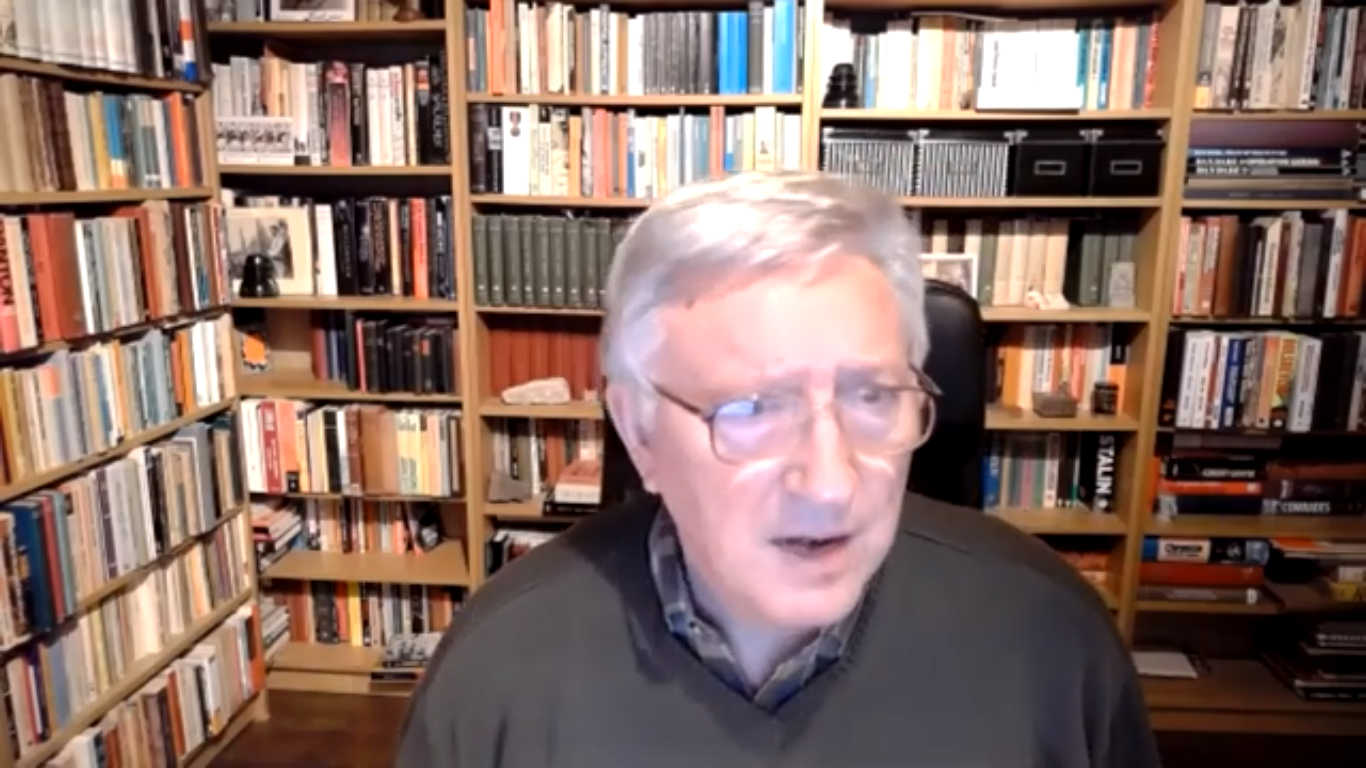 The General Confederation of Italian Industry (Confindustria) elected Carlo Bonomi as its president unanimously to launch a heavy attack on the working class. However, the attempt by the Italian bourgeoisie to close ranks is proving ineffective. The divisions within the ruling class are ultimately the result of deep fear of a massive working-class response. The lessons of the March strikes that forced the government to halt most non-essential production are not easily forgotten. The government is in a state of extreme precariousness and is trying to mend relations with the union bureaucracies. But the workers no longer have any faith in this government and the crisis of authority of the union bureaucracies is well established. The climate of national unity that reigned in March is a thing of the past.

After the 2008 crisis, the enormous accumulation of anger found a channel on an electoral level: the hopes of many were placed in the Five Star Movement. Today the situation is completely different: the promises and illusions sown by the Movement have been broken by the test of government. We have already witnessed several important struggles throughout the autumn (metalworkers, workers in the culture industries, delivery workers): new sectors are beginning to move, young workers are starting to organise. The main point that arose from the discussion is that a grand resumption of the class struggle is being prepared in our country.

Missing once again is a party that represents the organised expression of the Italian working class, and that has authentic relations with it. However, this also means that there is not even a reformist party that can contain the anger of the workers and direct it into "safe channels". The bourgeoisie lacks such a party, which is hardly reassuring. 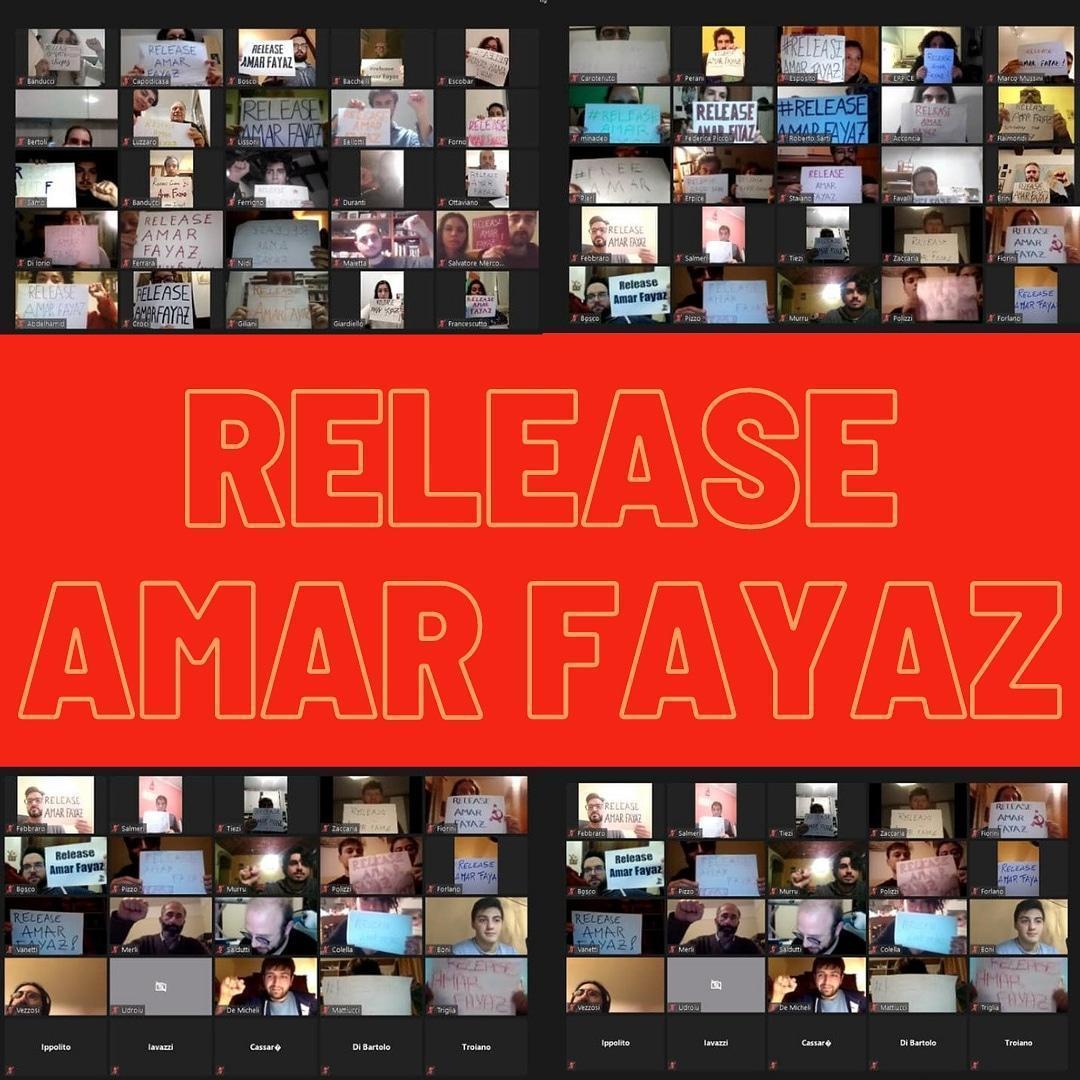 The congress called for the release of our Pakistani comrade who was disappeared over a month ago / Image: SCR

In this context we appeal directly to the workers: in July we launched our alternative platform "Giornate di marzo" (March Days) within the CGIL, to organise those layers of our class who see today the necessity of a large-scale political battle against this system. The congress included a trade union commission, with the participation of dozens of our union activists and workers, to take stock of the class struggle in the country and prepare for future conflicts.

At the same time, we see radicalisation growing among students as well. This is a process that has begun in recent years and has been strongly expressed in the Fridays for Future movement against climate change. An entire generation of students understands that this system has nothing to offer. The total ineptitude with which schools were closed only confirm this assessment. To date, the prospect of reopening schools in January has yet to be confirmed. But one thing is certain: they will reopen again in the same conditions in which they were closed, with nothing substantial being done to ensure a safe return to classes.

Our young comrades have built a platform around the slogan "Alziamo la testa" (Raising our sights) to address these students with a definite programme of struggle and a proposition to build student unions/organisations in every school. An assessment of this work and the logistics of our future intervention were discussed in a special youth committee of the congress.

In this exceptional context, the International Marxist Tendency has seen a great growth of its activist base. From April to September we count 550 new comrades worldwide. We consider this development only the beginning of the enormous potential opened up by the change of conscience affecting so many young people and workers. This growth has also been seen in the Italian section of the IMT and is the result of a process of political awakening, to which we have responded with a perspective of organisation and struggle on the basis of the timeless principles of Marxism. An International with our prospects and orientation, we are sure, will be able to take advantage of the new opportunities and deal with future challenges. Numerous sections of the IMT sent video greetings to the congress, which you can see here. 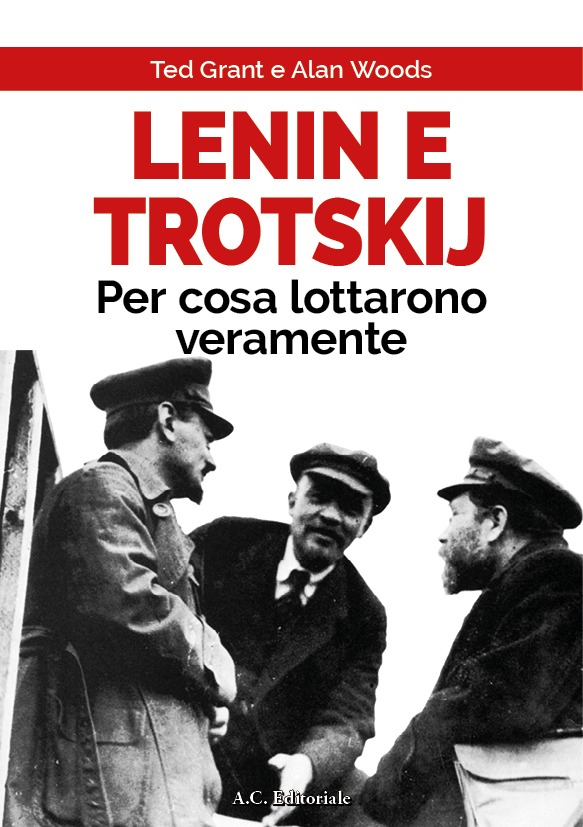 AC Editoriale will launch a new Italian-language edition of 'Lenin and Trotsky: What They Really Stood For' / Image: SCR

The building of the IMT was the central point on the agenda of the third day of the congress, where 32 delegates took the floor. We managed to maintain a high level of political activity during all the months of the health emergency, with regular online initiatives that allowed us to get in touch with many people from areas where we did not previously have a presence. Today, we have the beginnings of an organised presence in new regions such as Tuscany, Veneto and Puglia; as well in a province heavily affected by Covid19, Bergamo, and in the Canton of Ticino. The work that we are carrying out and will lead to ever-greater results in the future!

In the near future, our publishing house AC Editoriale will launch a new Italian-language edition of Lenin and Trotsky: What They Really Stood For by Alan Woods and Ted Grant, which effectively responds to some of the false conceptions advanced by the detractors of the two great Russian revolutionaries, shedding light on their ideas and their revolutionary activity. We will also honour the 100-year anniversary of the birth of the Communist Party of Italy. In January, we will hold a national seminar, taking the opportunity to analyse the revolutionary traditions of the workers of our country, the errors and betrayals of the socialist leaders, the maturation and then the emergence of an authentically communist current within the old reformist party, until the formation of the new party linked to the Third International.

We will also organise a national conference on women’s struggle, to be held on 6-7 March, in response to the health emergency and devastating economic crisis that have impacted women especially harshly. Looking after children, increased workloads, and jobs lost despite limits on lay-offs all fall primarily on the shoulders of working women. Added to this is the increase in violence and femicides, particularly within the home, due to the forced coexistence imposed by the lockdown measures. And, again, we believe it is necessary to respond decisively to the reactionary campaign that has been waged for years against the sexual freedom of women and their right to terminate pregnancies.

This is a great time to be a revolutionary. Ever-wider sectors of young people and workers are reaching out for the ideas of Marxism, and our organization will be ready to receive them. What drives us is faith in our ideas, and our profound confidence in the working class: the only truly revolutionary class!