Globalisation
Share
Tweet
This is a book that every young activist, trade unionist or socialist will want to read. The book, based on historical examples from the past 190 years, shows that the workers are facing basically the same problems as ever, in spite of what any of our "post-modernist" friends would like us to believe.

"The theoretical conclusions of the Communists are in no way based on ideas or principles that have been invented, or discovered, by this or that would-be universal reformer. They merely express, in general terms, actual relations springing from an existing class struggle, from a historical movement going on under our eyes."
(Marx and Engels:1848 "Manifesto of the Communist Party")

This is a book that every young activist, trade unionist or socialist will want to read. Paul Mason, a journalist on BBC2's Newsnight programme, takes nine examples from labour history over the past 190 years or so and compares them to struggles that are taking place today. He demonstrates that the issues and problems facing workers today are similar to those faced by workers over the past two centuries. 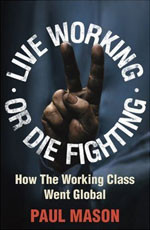 Obviously the world in 2008 is different to that in the early nineteenth century, and specific tactics and strategy which applied in the past may not apply to the current situation, but the same basic problems faced by workers of earning a living under capitalism remain. This is the view of Paul Mason in this book, and trade unionists in Britain today would agree with him.

The title of the book came from the weavers' revolt in Lyons in 1831 which is the subject of the second chapter of the book. The weavers would rather die fighting than live working.

If this book did no more than be an invaluable guide to some of the main events in the history of the labour movement then it would be worth reading. But Mason also believes that many of the lessons learnt in the past, particularly about how workers should organise in the workplace, are pertinent to struggles today. This aspect makes the book an important addition to the armoury of trade unionists and socialists everywhere. Mason does this by telling the stories of how individuals are directly affected by these great events. For the historical episodes he uses diaries, memoirs and histories, for today's events he himself has interviewed the participants.

The main section of the book itself is divided into nine chapters. Each chapter opens with a brief account of the experiences of workers today, gathered by Mason from all around the world during the past 5 years. Each contemporary experience is then followed by an account of an episode in labour history where workers faced similar problems to those of today. Obviously, what worked in the past cannot be applied mechanically today disregarding huge differences in time, place and culture, but it is instructive nevertheless to examine both the similarities and differences. Thus:

Much to my regret, there is no room in this review to give a flavour of the richness of the experiences of workers in all the examples given - all of them are worth reading. In every example rank and file workers demonstrate their willingness to create a better world for themselves and demonstrate their capacity for self-sacrifice.

There are many fascinating stories in this book. The chapter on the Paris Commune is the best brief account I have read, but this is probably surpassed by the section on the Chinese workers in Shanghai in the 1920s, which should be essential reading for anyone wishing to understand what happened in China during that time.

The account of how an SPD worker lived his everyday life before the First World War is an eye-opener. Perhaps the most poignant history is that of the activities of the Bund, the Jewish workers' organisation, in the years before the Second World War. The standout part of the book is the account of the Shenzhen workers in China in the current day. If you have any doubt that current day Chinese workers face some of the most exploitative conditions in the world today you should read this part of the book.

At the end, Mason also provides a brief history of the labour movement since the Second World War in both the Western 'developed' countries and in the developing world. Space precludes a detailed analysis, but clearly Mason is no Marxist.

If there is a weakness to the book it is in a rather contradictory approach to theory. Paul Mason makes a powerful argument that activists today can and should learn important lessons from the past and apply those lessons to their current predicament.

Unfortunately, in so doing, he is dismissive about the importance of theory. For example, in the section on the new general unionism which organised unskilled workers at the end of the 19th century, Mason refers to "the great attraction of syndicalism, as against the intellectual creeds of socialism and anarchism, was its roots in the working class". In other words what was important was not theory but practical organisation. Mason has a point, but how can workers, both in Britain and around the world, learn lessons from previous struggles without drawing general conclusions, that is theoretical conclusions, about the nature of class struggle, capitalism, working-class organisations and so on?

Inevitably, workers can and do arrive at theoretical conclusions. For a majority this will be as a direct consequence of struggles they themselves participate in. A very small minority will draw theoretical conclusions as a result of reading and discussion even in the present day. Ironically Mason cannot avoid reflecting this discussion about theory amongst workers, but is somewhat dismissive of it.

For example, at the start of the chapter about the German working-class movement, Oskar Hippe is a 14 year old member of the German SPD who takes part in an anti-War march days before SPD Deputies vote in favour of the First World War. By the end of the chapter, in 1933 Oskar is a member of the Trotskyist opposition in the German Communist Party. Clearly, even on the individualist basis Mason takes in the book, important theoretical debates have taken place amongst workers, debates that are of relevance today, but Mason gives no real indication, even in brief outline, of these debates. His jaundiced view of intellectuals is a laudable instinct, rooted in basic class consciousness, but wrong. Intellectuals can, have played and do play an important part in the labour movement, provided they base themselves on the working class. Mason himself gives an approving example in the case of Louise Michel, a schoolmistress in Montmartre. She based herself upon the working class, played an heroic role during the Paris Commune and ended up an anarchist in London.

So Marxists will want to supplement this book with the writings of Marx, Engels, Lenin and Trotsky, and the Marxists since Trotsky's time in order to bring out and illustrate the lessons from the history of the labour movement. Theory is not something alien to the experiences of workers, but as Marx and Engels explained in the Communist Manifesto, theory is the general expression of actual class struggle; the class struggle so vividly outlined by Paul Mason in his book. Despite its shortcomings, this hugely ambitious book is well worth reading.

The final word should be given by one of the workers themselves. I could have chosen the fine words of many workers in this book, but the last chapter proper deals with the occupation by its workers of a tile factory in Neuquén in Argentina following the devaluation crisis in 2001 when many factories were occupied. The workers have reduced the working week and taken on 50% more employees. Whereas before the occupation there were around 300 accidents a year; there have been 33 accidents since the occupation. The leader of the workers at the factory, Raul Godoy, a Marxist, says:

"We feel more free, especially because of our struggle. You start to feel free when you start fighting, when you can see the problems and identify the enemy, understand what the bosses do, and the union bureaucracy. We can show the world what we have done; although we are only a grain of sand on a huge beach, our experience shows what workers can do...."