Consumer boycotts have been raised as a way of putting pressure on the Zionist Israeli authorities to cease their inhumane treatment of the Palestinian people and grant them their own state. History shows that such boycotts don’t actually achieve anything concrete. But recently we have witnessed another type of boycott, a workers’ boycott, carried out by dockers and transport workers who have refused to handle Israeli goods. That is much more of a threat to the Israeli government.

In contrast to the purely symbolic attempts to convince “consumers” to stop purchasing Israeli products; workers’ unions in India, Greece and the USA have taken matters into their hands and implemented union boycotts directly at the source: at the ports. Palestinian trade unions have launched an appeal to dockworkers’ unions across the world to implement these boycotts, and workers are responding in a powerful display of the internationalist instincts of the working class.

The General Federation of Trade Unions (PGFTU), the General Union of Palestinian Workers (GUPW), the Federation of Independent Trade Unions (IFU) and 11 other Palestinian labour unions signed the call, issued on June 7th. What we are seeing are isolated examples, for now, but they provide an example of what could be achieved if solidarity activists focused on working class methods. 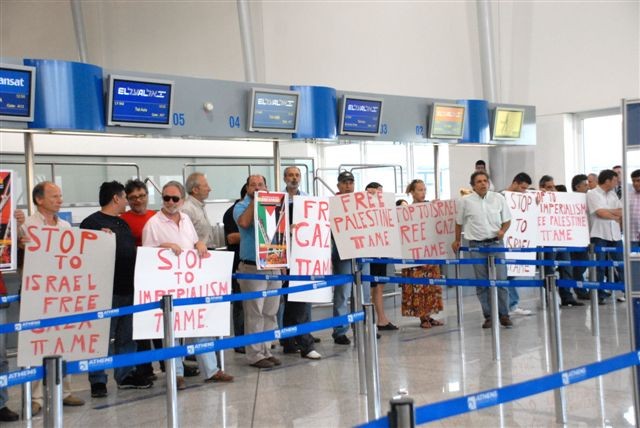 In Greece on Wednesday, July 14th, workers organized by PAME [the Communist Party fraction in the trade unions] picketed the EL’AL check-in counter, preventing flight 542 from Athens to Tel-Aviv from boarding for two hours. PAME workers were responding to a call for an international campaign by the World Federation of Trade Unions.

The statement from the Executive Secretariat of PAME calls for solidarity with the Palestinian working class:

“This action was a part of the international campaign of the World Federation of Trade Unions against the continuous blockade of Gaza by the government of Israel which has the support of American and European Imperialists.

“During our stay at the airport we condemned the government of Israel for its assassinations and inhuman attitude towards the people of Palestine. We also condemned the hypocrisy of the Greek government and the other governments of the E.U.

“We expressed our solidarity with the struggle of the working class and the people of Palestine for a free and independent state, having east Jerusalem as its capital.” [See PAME blocked the counter of the Israeli airline EL-AL and more pictures here]

At Cochin port in India, workers in a trade union affiliated to the CPI-M began a boycott of Israeli cargo and ships on June 17th. The decision was reached when news arrived that Israeli cargo unloaded at Colombo port in Sri Lanka was en route to Cochin by means of another vessel. There was a union rally on June 23rd at the offices of Zim Integrated Shipping Services Pvt Ltd, the largest Israeli shipping company, against the blockade of Gaza, as well as the flotilla massacre. Representatives from at least five port unions and the Water Transport Workers Federation of India were present at the rally. 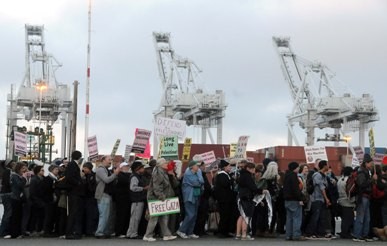 In Oakland, near San Francisco, dock workers took action and delayed the unloading of a Zim cargo ship by over 24-hours. At 5.30am on June 20th, hundreds of workers and activists showed up for a rally at the port against Israeli apartheid. The demonstration was organized by the Labor Community Committee in Solidarity with the Palestinian People and supported by the San Francisco Labor Council and the Alameda County Labor Council, which mobilized their members. The Arab American Union Members Council was also involved in the action, and present on the picket lines. Locals 10 and 34 of the International Longshore Workers Union (ILWU), representing the dock and clerical workers, both endorsed the action. Local 10’s Executive Board cited the call from the Palestinian trade unions in their unanimous decision to take action.

When the workers on the day shift began arriving for work, they refused to cross the picket line, citing “health and safety” reasons. Draconian anti-union laws in the US make it illegal to stage solidarity strikes of any kind, necessitating this subterfuge. The bosses’ association on west-coast docks, the Pacific Maritime Association (PMA) called in the arbitrator in the hope that they could force the workers back to work. They requested that the arbitrator call in the police to break through the picket line and “make it safe” for the workers to go back to work. 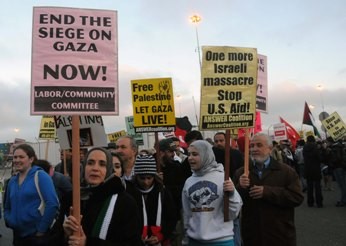 In 2003, police had injured dock workers as well as demonstrators against the Iraq war in a similar incident, and so the workers argued the police themselves were a danger to the workers. The arbitrator agreed, and ordered the workers be given the day off with pay. The company ignored the decision and has yet to pay, which is to be expected: arbitration is the method of the bosses against the unions and not intended to be taken seriously if their interests are at stake.

The ship was scheduled to arrive at around 8.30 in the morning, but as the crowd built to over 800, the company delayed its arrival until 6.00pm. By that time the realization set in that a second mass picket line was inevitable, so the company chose not to call in the evening shift and left the ship with its cargo as it was.

It is worth noting that the Israeli consul Akiva Tor took the action of the dockworkers seriously, asking for a meeting with the ILWU Local 10 Executive Board for July 6th. Realizing the reception was not going to be a friendly one, he backed out and sent his deputy in his place. After having received a letter of support and thanks from the PGFTU, which also requested that they not meet with the consul, the executive decided not to allow the delegation in.

No consulate has ever approached BDS activists in an attempt to convince them to buy Israeli oranges. But when longshore workers refuse to unload a cargo ship, the consul requests a meeting with the executives. This is for a very obvious reason: these working class methods, if repeated and extended, can cause real damage to the Israeli bourgeois. They are dangerous to the Zionist ruling class. The same cannot be said of the BDS campaign as a whole.

Workers’ methods cut to the point

We point to these examples, which contain real lessons for all those interested in the liberation of the Palestinian masses. The consumer boycott holds no real significance. Neither does divestment, attempting to convince the world’s capitalists to withdraw their investments from Israel. Nor do sanctions, as they rely on the world’s imperialist governments and their den of thieves, the UN, carrying them out. Such bodies only act on their own material interests, and this means the interests of the capitalist class.

These are empty methods, alien to the working class. They are easy to agree to, because they require nothing of those leaders who declare themselves in support. The way forward is being shown by our class, which has no time for pretty but meaningless talk, taking concrete action where others can only appeal to the hearts of the capitalists.