Ultimas Noticias asked a Alan Woods a series of key questions about the Venezuelan revolution and the dangers in the situation that flow from the lack of initiative in taking the revolution forward and finally completing it with the expropriation of key sectors in the economy.

Nov. 16 2009 – Alan Woods represents the hard line wing of the revolution. It is not a question of building new structures on the old base as the reformists ideologists propose. For Woods, the revolution requires a new base, a clean break with the old rule of the oligarchy. Regular visitor to Venezuela since Hugo Chávez came to power, Woods talked to Últimas Noticias about the current situation of the Bolivarian process.

How could you explain a revolutionary process which has not touched the financial sector, which is the backbone of capitalism?

This is the crucial problem.

There is a lot of talk about socialism, but if the economic power remains in the hands of the same national oligarchy, revolution is not possible. Hence the title of my book: Reformism or Revolution, Marxism and Socialism of the 21st Century – a reply to Heinz Dieterich.

Are we in a reform or in a revolution?

We are in a revolution, but it has not been carried out to the final conclusion and this is dangerous, because the whole of history shows that it is impossible to carry out half a revolution.

What are the dangers we are facing?

A number of nationalisations have been carried out, but we have still not touched the centre of power: the financial sector. Therefore, on the one hand we do not have a socialist planned economy, but on the other hand we do not allow the capitalist system to work according to its normal laws, and this at the end of the day leads to chaos, the worst of both worlds. If investment is in private hands, then the bosses only invest for their own benefit. You cannot plan what you do not control. These decisions, so important for Venezuela, are not in the hands of the Venezuelans.

In whose hands are they?

In the hands of those who have controlled them always, a handful of rich who continue to control key and basic parts of the economy, and particularly the financial sector. Until this central problem is not solved, there will be a danger.

From this perspective, the banks should be nationalised …

Of course, this is point number one. Without nationalising the banks it is impossible to take the necessary decisions to control investment and the productive sector.

For 11 years, the Venezuelan people have shown enormous loyalty to president Chávez. They saved the revolution in 2002, during the coup and then during the recall referendum. But there is a limit to the patience of the people. When a peasant, a worker, sees how his basic problems are not solved, then we can witness a process of disillusionment, of tiredness, and I am afraid, there is something very worrying. The threat of counter-revolution has not gone away, it is still there. Up until now the masses have always voted for Chávez, but there are serious problems of a certain worsening of conditions, the reforms are being affected by the economic crisis, there are also problems of corruption, bureaucracy, careerism.

In these conditions, the danger is that the right wing will go on to a real offensive. This seems to me to be a more serious threat than Colombia.

The main danger I see is not external, but internal.

Don’t you think that at this point the government has become counter-revolutionary?

No. I wouldn’t say that, but it is a government that is not doing what it should be doing. There are vacillations, almost permanent indecision, confusion. There is also a serious problem of bureaucracy.

I think that president Chávez is a very courageous and sincere man, but one man alone cannot make a revolution.

Yes, I think so, below him there is a thick layer of bureaucracy which does not share his ideas. The bureaucracy is counter-revolutionary, it reflects the ideas of the bourgeoisie within the Bolivarian movement.

Without control by the rank and file, then the problem of the bureaucracy can never be solved.

Sacrifices yes, but there must be sacrifices for all.

That’s true, you have mentioned the two first key problems of this revolution

This is the reason why we need to make a criticism, criticism is very necessary. I am not criticising the Bolivarian revolution, nor president Chávez, but these deformations of the revolution which do exist.

But do you not think that just as it is important to criticise, there must also be a readiness of the government to listen to these criticisms?

Some do listen, but there is a layer which is not interested in these criticisms at all …

Is president Chávez, amongst those who are not interested?

I think that president Chávez is aware of this. But, how can one man fight against this on his own (…) ? There must be a revolution within the revolution. 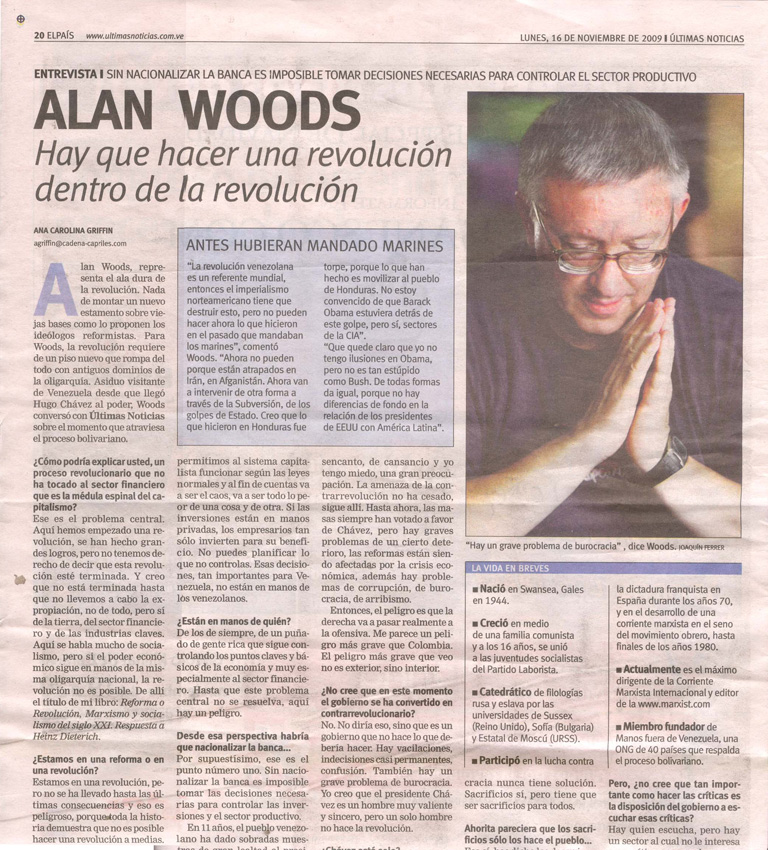