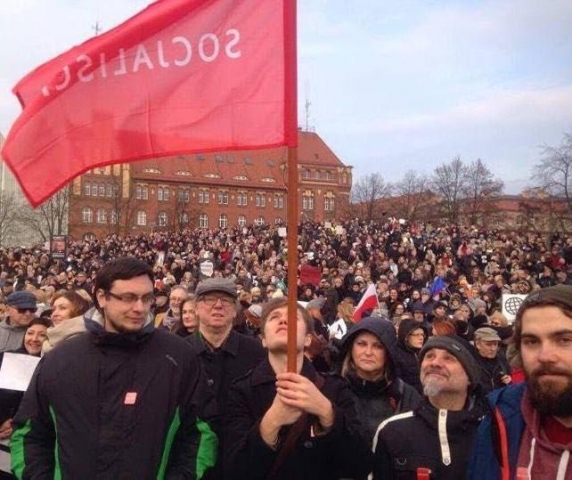 On the surface, the wave of political earthquakes shaking Europe and the world seemed to have left Poland unaffected. The seething anger growing from decades of privatisations and austerity has produced neither a Corbyn nor a SYRIZA. Eight long years after the economic crash of 2008, an election for the first time in the new republic's history produced a majority government of the nationalist, ultra-Catholic Prawo i Sprawiedliwość, Law and Justice Party, (PiS), ousting the previous Civic Platform led government, considered “right of centre”.

The inauguration of 2015 was met, of course, with messages of admiration from the reactionaries worldwide. Poland has quite often been branded as "the most right-wing country in Europe". This is the "triumph of tradition!" they shouted. On the surface, they would appear to be right. The United Left led by the discredited ex-Communist Party careerists of the Democratic Left Alliance (SLD) came just short of the 8% threshold necessary for electoral coalitions to enter parliament. One of the main reasons for this was that a good portion of the advanced layers of the working class vote went to the newly emerged Together Party (Razem), which tries to present itself as a twin of the Spanish Podemos. The two “left of centre” options together won just 11% of support.

All this is hardly a real reflection of how Polish workers feel about their situation as a class, with distinct economic interests. Engels once said that, “Poles are hitherto the only Slavic nation which displays revolutionary attitudes”, and describing the Polish proletariat as the most advanced and class conscious as compared to other culturally similar nations of Eastern Europe. What has changed then, since the glory days of the Paris Commune and the Marxist SDKPiL [Social Democracy of the Kingdom of Poland and Lithuania]?

After decades of betrayals by the Stalinists and Social Democrats, it is easy for a class conscious Polish worker to fall into a mood of pessimism. However, there are many elements in the situation that help to understand the real revolutionary potential of the Polish workers. It is true that the most recent developments seem to indicate a shift to the Right. Indeed, the PiS's views on social issues are reactionary to the core, but they didn’t express that too clearly during their election campaign in 2015. The most fanatical and reactionary elements of the party, such as conspiracy theorist Macierewicz, reactionary Pawlowicz or even the leader Kaczynski, were taken out of the limelight and the new “moderate” face of the PiS, with the current Prime Minister Beata Szydlo as its head, were brought to the fore. They presented themselves as the party of welfare and “the Polish people”. The substance of their argument was that the mainstream more “professional” parties of the capitalists had nothing left to offer, whereas the PiS appeared as the only realistic shortcut to kick out the corrupt politicians of the PO [Platforma Obywatelska, Civic Platform].

The leadership of the reformist Left has dug itself into a terrible position, refusing to use its past credibility to address the fact that the core problem is the capitalist system itself. Instead, they have joined the Americanised celebrity politics and mudslinging of one establishment party against another. After abandoning one “more of the same” party after another, the workers are looking for more fundamental solutions to the situation they are facing.

“The Civic Platform started ruling when I was finishing primary school. I used to think that by the time I’m older, things would change. And so they did, but they changed for the worse. The PO left young people behind. It’s difficult to get a job, even more difficult to get a house and in general we’re just worse off. Maybe the PiS will change that. “

Since the return to capitalism and the reintroduction of bourgeois democracy, Polish workers have been willing to vote for seemingly Left parties, including the Democratic Left Alliance (Sojusz Lewicy Demokratycznej, SLD), which was in government from 2001-2005. But the constant betrayals of the so-called Left have certainly left a big vacuum for the right-wing PiS and other copycat sects. The SLD, when it implemented a poll tax system, made even New Labour look left-wing in comparison.

Now that the honeymoon period of pre-election promises is over, the PiS is, however, obliged to deliver. As the nationalist manifesto continues to contradict the actual interests of a significant wing of the big foreign and national capitalists, splits in the state apparatus and the ruling class have been on the order of the day. It has led to a polarisation of the country’s political climate, immediately sparking clashes between the so-called Committee for Defence of Democracy (KOD) led by the old pro-EU establishment on the one hand and the national bourgeois, prelates and ultra-nationalists on the other hand.

But beyond the splits in the ruling class, just as with Trump in America, the PiS government’s actions are spawning mass opposition. Initially, the formation of KOD, supported and run by establishment media and parties, had offered no real answers apart from a return to the old constitutional order of things. The protests could have grown into a real working class movement had they been spearheaded by an even remotely left leaning leadership.

The role of women in the recent period has been striking. Every time there have been attacks on the working class, whether through austerity budgets or police water cannons, women workers have repeatedly taken to the streets. They were inspired not by the old liberal elites rebranded as the KOD, but by their own outrage, instinctively led by their class interests. The spark, which fuelled real opposition to the whole establishment, has rekindled an embryo of a future mass workers’ movement, and it is the Polish working women who are leading it.

Following attacks on their fundamental rights, such as the right to abortion, working class women and their male allies have repeatedly come out to protest in big numbers. The most advanced layers have also started to draw left-wing conclusions and have led the currently strong but dispersed movement to meaningful victories as well as sparking debates about the systemic oppression of women.

Tens of thousands have filled the streets following the attacks on whatever was left of abortion rights in the Czarny Protest (Black Protest) episode, [see Polish women strike back at church and state over abortion and Pro-democracy protests - early signs of what lies ahead for Poland]. They have continued repeatedly to manifest their increasing strength with mass turnouts, attending the recent demonstrations during the International Working Women’s Day on March the 8th in big numbers. They joined the calls for an international strike of women and inspired huge numbers to once again come out and raise the slogan of the emancipation of women. 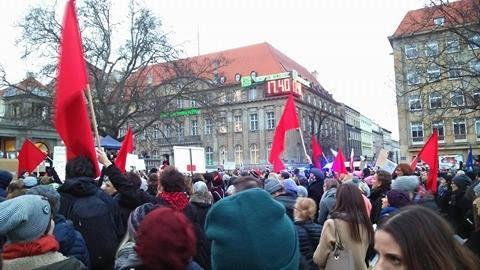 For class-conscious Polish workers, the recent events should be a wake-up call and any pessimistic or ultra-left tendencies should be swept to one side. The period of isolation and retreat of the working class movement is starting to dialectically shift in favour of the building of genuine mass party of the working class. The Polish working class does not have century-old traditional parties of labour, with the Polish Socialist Party (PPS) and the original Communist Party of Poland (KPP, founded in 1921) having been physically eliminated by the long period of Stalinist tyranny. The most advanced layers of the working class, in these conditions, should avoid adopting a sectarian attitude to this historic mission. The working class itself will build its own mass party, and as history has shown, now is not the time to snipe from the side-lines.

“I think that in the current situation, we should not be avoiding these events just because the vast majority of attendees are not Socialists. Considering that liberation of women is an important part of programmes of Polish Socialists, our presence at the protests is crucial as it allows us to present a fundamental alternative to people who are starting to notice the core contradictions of the system. We also have to highlight that we are not for continuation of a Liberal-Catholic compromise but a more far-reaching change, which is what differentiates us from the dead end of reformism.”

As Lenin said, capitalism will always find its way out of a crisis. It is not up to Marxists to wait for its final downfall, but to build the cadres, which will lead the working class to its final liberation. Polish Socialists should not look at things superficially but arm themselves with the ideas of Marxism and project a clear alternative, which will end oppression in all its forms.

There is no doubt that a large layer of the Polish working class is still affected by the right-wing propaganda, but the lack of clear answers from any of the bourgeois parties is becoming more and more apparent, with Polish women leading the way out of the reactionary fog.

It is up to Marxists to provide the long-term memory of the working class and help it draw conclusions from the failures of both Stalinist degeneration and the impotence of reformism. With the correct analysis and a strong organisation, the revolutionary left will be able to attract layer after layer of revolutionary workers, which will be the basis of a future mass party of labour.

The strength of our ideas is being expressed in our correct analyses and growing numbers internationally, and whilst it is still necessary to maintain a sense of proportion and not to fall into the trap of ultra-leftism, the powerful ideas of Marx, Engels, Lenin and Trotsky are now necessary in Poland more than ever.