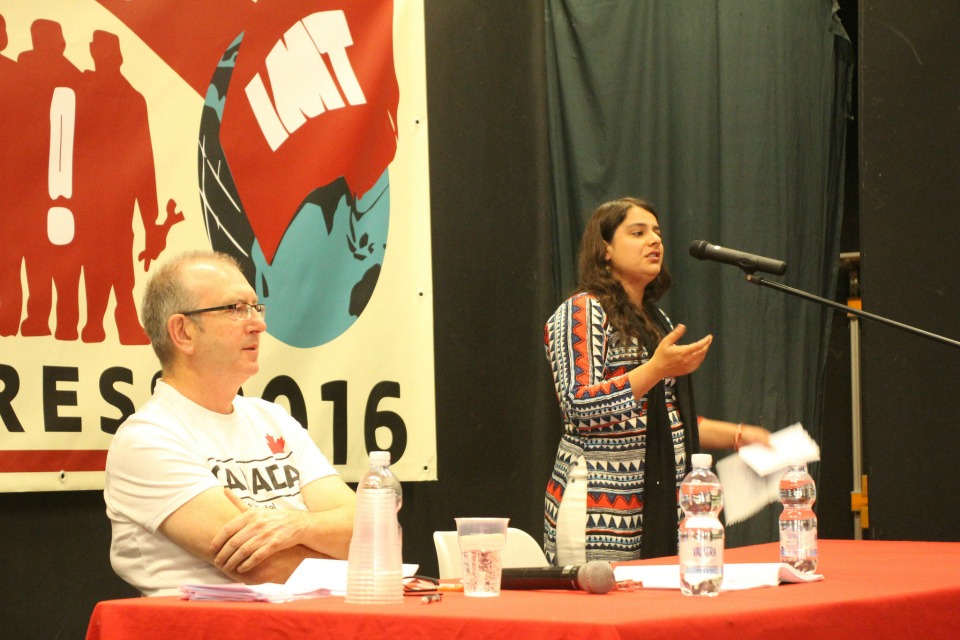 "As in the entire third world, women, especially poor women workers of Pakistan, are suffering. Sometimes I feel that they need a socialist revolution more than anyone. It is the only way to freedom! "(Anam Patafi)

One of evenings of the IMT world congress was reserved for discussion of the women's struggle in Pakistan. It was decided to hold this meeting because of the numerous questions from the comrades in attendance on how we could spread Marxist ideas and develop militant political activism amongst women in a country with such severe women’s oppression. Anam Patafi spoke for about an hour and a half and answered many questions on the topic.

Firstly, she explained how terrible economic and religious conditions play a huge role in Pakistan. From an economic point of view, the indicators are undoubtable. About 56% of the population is illiterate, daily lack water and electricity, and the unemployment rate is very high. The conditions of working and living are at a level that should have been abolished centuries ago. At the same time, the overwhelming majority of the population lives under a religious regime of which sustains a 1500 year old system of morality. These feudal traditions are very well used by the capitalist system.

Throughout Anam’s presentation, she reiterated that the conditions of women needs to be read in this context. It is very important to capitalism that women remain oppressed.

Patafi explained that the situation of Pakistani women is very different from that of European women. But at the same time there are two kinds of Pakistani women: poor women - daughters of workers -, and wealthy women, with which it is not possible to draw any kind of comparison, because although the religious regime is the same, the fact that bourgeois women have access to different education and living conditions radically changes their lives.

As Anam explained, Pakistani women live in a world that does not allow them to have any kind of happiness, even in regard to the most basic questions. A Pakistani woman doesn’t know what means to build any kind of affection with her spouse, children or siblings.

Anam pointed out that in Pakistan the birth of a son is a great source of joy, whilst the birth of a female child causes great sorrow. A woman is considered a burden on the family. Because of this, a girl who grows up in traditional Pakistani environments lives under so brutal oppression that is almost impossible for her to grow in a healthy way, either physically or psychologically.

One comrade asked Anam to explain how she had left these ancient traditions behind her and had become a Marxist. The comrade explained that she had the good fortune to grow up in a family of Marxist tradition and that she was driven by them to the revolutionary militancy. But, although she is an exception, despite all the conditions imposed in this country, she argued that it is indeed still possible to develop a militant work and build a society in which the situation of Pakistani women is transformed.

Continuing the report, she explained that only 12% of women go to school. In general, women are condemned to live locked in their homes, being prepared to marry and engage in housework. There is no possibility for them to choose their future. When a woman falls in love with the wrong man - a man who was not chosen by the family, who is not the man to whom her family sold her - she is punished severely, often with death. Every year more than a thousand women are murdered for honor issues, having or run away with a man, or committed adultery. On the other hand, when they marry, they are treated as objects, as domestic servants, and as an instrument of sexual or violent sadistic pleasure, since they are often beaten without any reason. The issue of adultery is particularly extreme. In many cases story of adultery are fabricated just to justify the expulsion of a woman from a house, is that, the husband does not want her anymore and to expel her, he invents betrayal to get rid of her. It is common for women in this predicament to be beaten or burned alive in public square or in front of their own homes. Families are often complicit in this. In many cases the members of the woman’s family commit these atrocities themselves in order to disperse any perception of dishonour she might bring upon them.

Anam explained that, nowadays, in addition to all other problems, there is gender segregation in Pakistan.

Pakistani women marry before age 18 and many of them are already "married" when they are 5 or 6 years old, because so the families can get rid of her expenses.

Despite all that, many women can overcome all these obstacles and rise. They can begin to participate on political life and movements, especially those who can work. The fact that a part of Pakistani women have entered the labor market is a consequence of the necessity of capitalism to reduce the cost of labor, since they earn between 30 and 70% less than a man for the same work. Nevertheless, this entry into the labor market changes the condition of the woman. Now she has a life, talks to other people, and lives a bit of the world. She makes a substantial leap in her consciousness. Today the largest teachers’ and nurses' unions are composed largely of women and in the last year they have staged strikes and protests.

Anam explained that our organization has made persistent efforts to win women to Marxism and militancy, and those women are usually attracted not by their condition as woman, but by the extreme poverty that they and their children are subjected. After a first contact, it is possible to open a dialogue on the role she plays in society and on the need to change the system.

Even with all this horror, Anam, with a quiet smile, told us that there is a saying in Pakistan that "Only our music is enough to kill the fundamentalist".

Anam concluded by saying that if in the rest of the world the socialist revolution is fundamental, in Pakistan it is a matter of immediate survival.