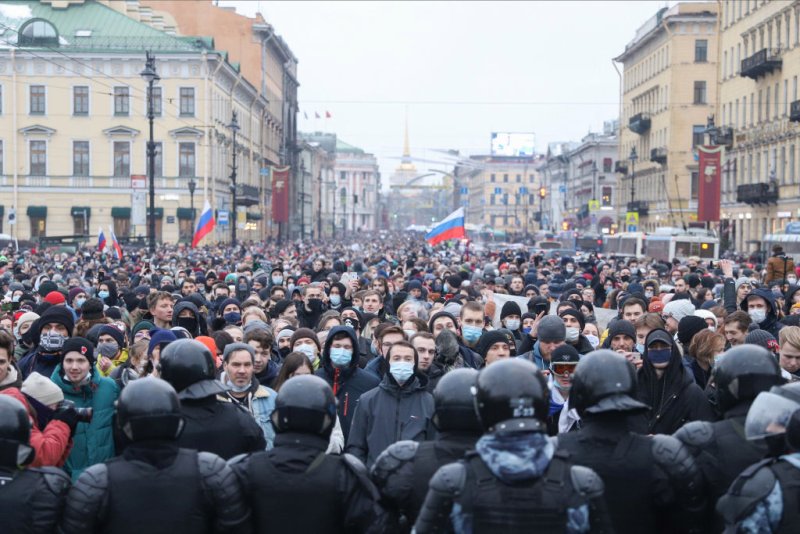 Only a month into 2021, this year is turning out to be, if not a turning point in the modern history of Russia, then certainly a year of tremendous importance. No matter how much the authorities may wish it was so, the start of a new year doesn’t herald a new beginning or a fresh slate as far as the accumulated contradictions of Russian capitalism are concerned. On the contrary, these contradictions are being sharpened by the day, raising more and more sharply the question, “socialism or barbarism?”

The liberal oppositionist and anti-corruption blogger Alexei Navalny, whose popularity had declined since 2018, rebounded at the end of 2020 and the beginning of this year. Several events contributed to his renewed acclaim. In August 2020, Navaly was poisoned with Novichok nerve agent. Then, on 14 December 2020, after successful treatment in a German clinic, Navalny and his team (in cooperation with Bellingcat, The Insider, CNN and Der Spiegel) published an investigative film targeting his poisoners. The video received a wide viewership in Russia. 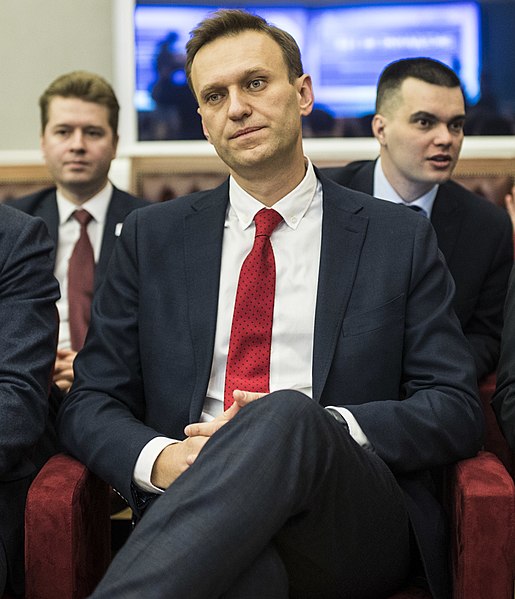 The protests that have erupted as a result cannot be described as protests in support of Alexei Navalny / Image: Evgeny Feldman

On 17 January 2021, Alexei returned to Russia and, upon arrival, was immediately detained. On 19 January his team responded by publishing a second investigative film, this time about a palace in Gelendzhik, owned by Russia’s President Vladimir Putin. So far the video has been watched more than one hundred million times, serving to galvanise a mood of discontent in society. Needless to say, Navalny and his organisation, the Foundation for Combating Corruption (FBK), have also gained in popularity on the back of it.

The January protests and their nature

The protests that have erupted as a result cannot be described as protests in support of Alexei Navalny. His detention was, along with political repression across the country, merely a catalyst for popular discontent.

It should be noted that repression against left-wing activists played an important factor in the explosion of popular anger. In February 2020, sentences were passed in the notorious “Network” case, in which the state sentenced a number of anti-fascists from Penze with 6 to 18 years of imprisonment for belonging to an organisation which did not exist. Since the beginning of 2020 we have seen a marked ramping up of repression by the regime.

In parallel with the detention of Navalny, on 18 January 2021, a sentence was passed on a Moscow State University student and anarchist, Azat Miftakhov, who was accused of attacking the Moscow office of the ruling United Russia party. Azat was sentenced to six years in a penal colony.

In general, the crowds of people who poured into the streets on 23 and 31 January 2021 at uncoordinated rallies and processions across the country, were raising the democratic demand of freedom for political prisoners. Whilst the protests on 23 January were largely, although not exclusively, peaceful, those on 31 January 2021 set a record for the number of persons detained in the past nine years: 5,754 people were arrested in 84 cities across Russia. According to estimates of the human rights portal OVD-Info, at least 63 protesters were beaten by riot police during their arrest.

Just two days later, on February 2, 2021, the Simonovsky Court of Moscow sentenced Alexei Navalny to 3.5 years in prison. Formally, Navalny was sentenced in connection with a fraud case connected to the Yves Rocher company, which flared up in the period from 2012 to 2014, and not because of any connection to the protests. This despite the fact that the verdict in the Yves Rocher case had been invalidated by the ECHR, and that the Russian authorities agreed with the ruling decision, having issued compensation to Navalny! It is the height of absurdity that the same case is now being used to throw him in jail.

The coronavirus epidemic that has spread across the globe has triggered one of the largest global financial crises in the history of mankind. Russia, of course, has not been a bystander immune to these events. Bourgeois economists may weep as many bitter tears as they like about the losses suffered by businesses, large and small. We know full well that in the three-sided confrontation: between businesses, the virus and the working class, the biggest losses were suffered by the working class.

Unemployment in Russia now stands at 6.4 percent, or almost 5 million people. This is the highest figure for eight years. The number of people living below the poverty line has jumped sharply by 1.8 million, rising to a total of 20 million, or 13.5% of the country's population.

From January to September 2020, the real disposable income of Russians fell by 4.3%. In the second quarter of 2020 by an eye-watering annualised figure of 8.4%! The last time incomes fell so dramatically was back in 1999, when a 12.3% fall was recorded.

The pandemic has not gone anywhere, and social contradictions in Russian society continue to grow. These numbers will only tend to continue their rise.

In parallel with the falling living standards of ordinary Russians, the oligarchs continued to enrich themselves. Despite the global economic crisis, the fortunes of the largest Russian capitalist families grew by $1.5 billion to $26.8 billion, elevating the Russian Federation to first position in the league of global inequality. It is the working class that has paid for the crisis of capitalism and for the inability of the ruling class to resolve the COVID-19 pandemic.

Along with the enrichment of the upper classes and the impoverishment of the lower classes, we have seen the simultaneous strengthening of the repressive apparatus of power. The Bonapartist Putin regime has continued to strengthen the key pillars on which it rests - the security forces including the OMON (special police), the National Guard and the FSB. 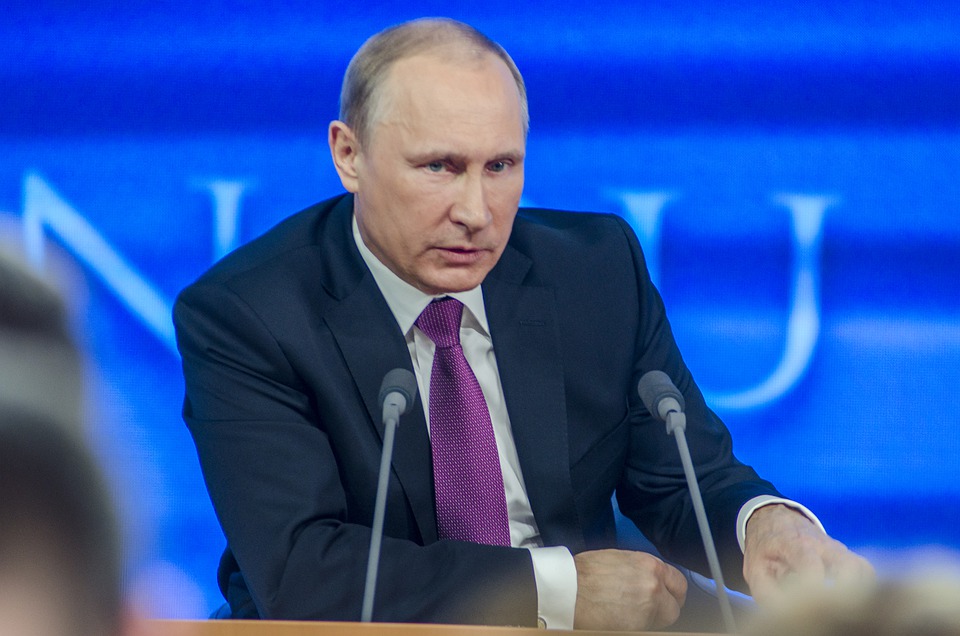 The Bonapartist Putin regime has continued to strengthen the key pillars on which it rests - the security forces, the National Guard and the FSB / Image: Pixabay

The draft federal budget for 2021 plans an increase in defense and ‘national security’ spending, which, taking into account official and shadow injections into this sector, would see the costs of the security forces rise to 5.82 trillion rubles ($76 billion)! As a result, the army, the National Guard, the Interior Ministry and the security agencies will eat up about 27% of the federal treasury between them!

There are no prizes for guessing at whose expense this will all be paid for by the regime. Expenditures on ‘social policy’ will be reduced by 192 billion rubles; allocations to support families and children will see cuts of 600 million rubles; support for the country's regions will decrease by 17% or 200 billion rubles; healthcare spending will be slashed by 162 billion rubles. In short, the workers will again be made to pay for the improvement of the lives and uniforms of the police chiefs, generals and intelligence bosses. At the same time taxes will be raised, and prices will rise!

Given this picture, it is only natural that protests, strikes and rallies will grow, as will the mood that feeds them. However, in the absence of a revolutionary working-class leadership, the populist liberal forces have been the first to gain. Of course they are unable to resolve the contradictions of capitalism, which lie at the root of these problems.

Navalny is among those now regaining some popularity. There are two main reasons for this: the deterioration of people's lives on the one hand, and the political repression against Navalny on the other, which has turned him into a kind of ‘martyr’ in the eyes of the people. At the same time Navalny benefits from a professional apparatus as well as the support from big layers of the petty bourgeoisie. He has been able to present himself as the only one willing to take the lead in calling for mass protests.

The reformist Communist Party of the Russian Federation has shown extreme weakness and a lack of resolution in the face of mass discontent. It has completely failed to capitalise on the rise of the class contradictions in society. A fear of losing state support; an outspoken opportunism on the part of the party leadership; and a desire to sit on multiple chairs at the same time: these are just a few of the reasons that the CPRF has, at the most crucial moments, been unable to take a lead in these protests.

In the lower ranks of the Communist Party however, this is increasing instability and turmoil. Trust in the central leadership of the party, and of G.A. Zyuganov in particular, reaches new lows every year among the rank-and-file members of the party. This distrust extends even to the leaderships of regional branches, with the party's ‘official’ line no longer being perceived as something true and unshakable. On the ground, regional offices are trying to develop independent policies. In the same vein, it is worth noting the attitude of Communist Party Central Committee member, Levchenko (a left-wing technocrat), who has come out openly in support of the protesters, despite the party’s official line.

The course of the protests and the tactics of the left

Nevertheless, the Communist Party as a whole stood aside from the protests, whilst the liberals tried to give a lead. This does not mean, however, that the protests were dominated by liberals. Thanks to the internet, news of the uncoordinated protest action on 23 January spread instantly to literally every section of society: students, workers, schoolchildren, and pensioners. Rather than being ‘in support of Navalny,’ the protests almost immediately took on the character of being in support of freedom for political prisoners in general.

Despite slogans demanding a general democratisation of the Putin regime, which fit into the political programme of the left, the Communist Party nevertheless declared that it rejected the protests themselves, rather than just rejecting solidarity with Navalny. At least that was the stance of the party leadership. The lower ranks of the party and regional branches, feeling the surge of protest, acted independently. There were, of course, those who continued to follow the general line of the party. However, many went to the protests more or less quietly, whilst others loudly announced their participation in defiance of the party’s position. 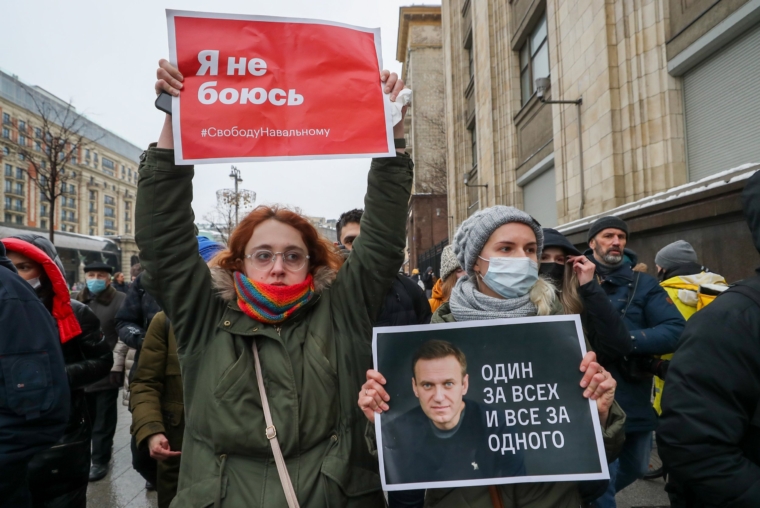 Rather than being ‘in support of Navalny,’ the protests took on the character of being in support of freedom for political prisoners in general / Image: Sergei Savostyanov

It goes without saying that no leftist organisation in its right mind would support the economic and political program of Navalny and the FBK. However, we are in full support of the broadest programme of democratic rights. In January 1905, the Bolsheviks, much like revolutionaries today, were a minority and by no means a leading force in the anti-Tsar protests led by Father Gapon. However, they joined the hungry and angry people in the city square. They spread political agitation through their ranks, and explained why it was that only the Bolshevik programme could solve their problems, and why Father Gapon was leading the protesters on a road that led to certain death. Likewise today it is the duty of revolutionaries to support the struggle of Russian workers and youth for democratic rights, while at the same time exposing the fact that the liberals are unable and unwilling to carry out a determined struggle for these demands.

What should the left do next?

It is difficult to say where the outbreak of protests will go next. In all probabilities, they will decline in the short term, rising again later in the year. In this period however, the contradictions in society will only increase, and inequality will continue to grow. Capitalism is unable to solve any of these problems. The inability of capitalism to solve these contradictions forces the ruling class to attack workers and strip them of their democratic rights. Thus, the only solution is to overthrow this system and struggle for genuine democracy, for workers’ democracy!