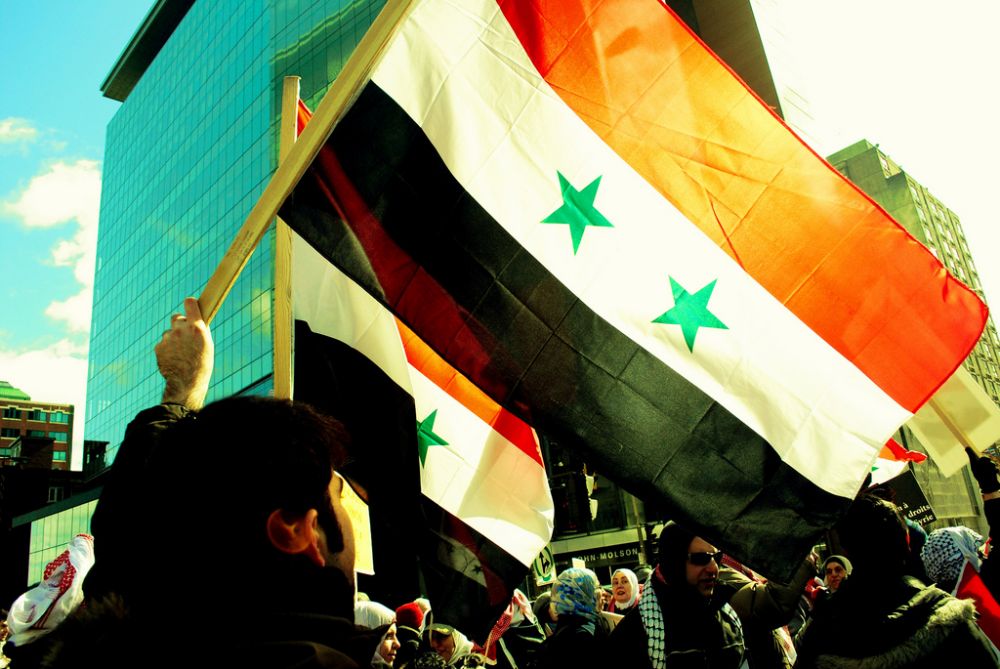 Things have been changing very rapidly in Syria, including some violent shifts in the mood of different layers of society. Last Friday, named the Friday of Martyrs, did not meet expectations in terms of the number of protesters, however we saw new towns join the protests as well as the Kurds coming out for the first time. Also some members of the Christian community joined the movement.

There is some confusion regarding why events turned out in this manner and what it means in terms of the popularity/unpopularity of the regime. We need to break the situation down into its different components to be able to understand it better. The regime is using a combination of a very dense deployment of its security forces in key cities (Damascus and Aleppo), extreme violence and killings in less important towns, and a campaign of lies and distortions combined with a series of promises.

Eye witnesses who tried to join demonstrations last Friday in the two major Syrian cities, Damascus and Aleppo, have described the situation to us as follows:

“Many youths were roaming the streets, looking for something to join, but whenever they arrived at squares and mosques where demonstrations were supposed to take place, they were confronted with very large numbers of the regime’s thugs armed with batons controlling key strategic points. The youths were very frustrated and did not know what to do; they went from square to square and from mosque to mosque to find the exact same situation facing them. Major mosques were completely besieged and protesters were locked inside. In Alrafa’ie mosque, about 600 protestors were locked inside and beaten up badly as they were leaving the mosque after they had been promised they would not be harmed if they agreed to leave peacefully to their homes. The youths did not know what to do and ended up leaving.

“In the Kurdish areas and tribal areas in the northeast of the country, young Kurds have finally come out, not in huge numbers, but the main thing is that they came out. From being in contact with young Kurds we have learnt that the leadership of the Kurdish political parties have been putting immense pressure on the youth not to join the movement, and the participation came after a bitter struggle to win over some of the youths to the movement. We heard the same thing about the Arab tribes, where the heads of the tribes are trying their best to put a break on the youth.

“In smaller towns around the country the regime reacted in a much more bloody fashion, not with batons, but live bullets. It is not clear why the regime is trying to drown the movement in blood in smaller towns and villages, but it does seem that they think that they can get away with it in those areas so they are going for it. In Homs, an important city between Damascus and Aleppo, the protests were bloody too with a number of deaths and arrests. A girl who was standing on her balcony taking a video with her cell phone was shot dead from below; this shows how brutal the oppression is. I have heard many stories of assaults and arrest of those who are simply taking pictures or videos. There are rumours that a Christian neighbourhood in Homes was involved in protests for the first time, which would be a very interesting development if true.

“In Douma, a town near Damascus, and considered almost a suburb of Damascus, the crackdown was very violent and 15 martyrs fell. Today reports said that 100,000 participated in the funeral, which is pretty much the whole town. The people of Douma have declared three days of solace, which is basically a form of a general strike. Another town nearby Douma, named Saqba, has also declared 3 days of solace in solidarity with Douma. This is actually a very interesting development in the struggle. Syrians on Facebook are already starting to talk about the need to organize strikes and civil disobedience. However, if the revolutionaries have not been quite capable of organizing demos, then it is not clear if they can organize strikes. However, this leap of consciousness in itself is significant and the fact that the mass movement we have witnessed in Darr’a and its surrounding villages is reaching towns near Damascus is a very significant development.

“In Darr'a and its villages, the demos on Friday were massive, we have heard a number of times that security forces have fled the city but they seem to be coming back every time. The people of Darr'a have managed to beat the thugs of the regime but they do not seem to know what to do next. Yesterday we read that they are forming committees to guard the roads leading to the city and its surrounding villages to prevent the security forces from coming back and arresting youths. There has been a campaign of arrests in the city.”

We can see here that the movement is very disorganized and this is a major weakness. Syrian society would have taken some years to reach the boiling point of a revolution, but the events in the Arab world accelerated the process and pushed certain strata of Syrian society to revolutionary conclusions. This caught the remaining sections – who are not quite ready and still have some illusions in the regime – by surprise and the regime is taking advantage of this. The layers that are moving seem to consist of the most oppressed and marginalized sections of the Syrian toiling masses, including the impoverished sections of the working class, petite bourgeoisie and peasantry. Resistance to change seems to be coming from the sections of the petite bourgeoisie that are comfortable with the system and also among the upper layers of the working class. Now, what the situation is among the rest of the working class and toiling masses, all those in between the upper and lower strata, remains an open question. There seems to be passivity, scepticism, and a sense of "let’s wait and see" among these layers.

The regime has managed to use its usual propaganda to win over certain layers, while pacifying others, to try to isolate the revolutionary movement. However, they have an inflated image of their mass support. Many of the people they mobilized were bussed in from workplaces and schools, and would not have volunteered to come otherwise. Many supporters believe the regime is too strong to be toppled by the masses and many are just afraid of change as the regime is spreading all types of propaganda to scare people about a sectarian war, the Muslim Brotherhood coming to power, or a foreign conspiracy to divide the country into cantons based on religion and race. Lack of leadership with a clear programme is a major obstacle to the movement to combat this propaganda.

However, the regime is going too far with this and in their overconfidence they are shooting themselves in the foot. The speech of the President was a major disappointment and angered many. The Donia channel, owned by one of the regime's men, has been broadcasting videos showing people in demonstrations pretending to having been shot and others coming and covering them with ketchup to create an impression of blood. Ketchup! This is so insulting to so many; the Syrian people are not stupid!

An example of how quickly people’s thinking can change was the reaction of one rank and file member of the Syrian Communist Party (the mother organization, and the only one that actually sill has a mass base) before the president's speech, who was very sceptical about the movement and who to an extent believed that there was some kind of conspiracy, but after the speech, became totally radicalized, and said the following: "The movement of the Left in Syria we are going to witness (very soon) will amaze everyone... Freedom is approaching and this time it will be greeted by communists and not others..." How this will play out in reality is an open question, but it shows the sudden mood shifts that can take place.

What we are seeing today in Syria is the direct result of the adoption of the market economy, and although this maybe incomplete as yet, it has been enough to cause the conditions of the middle and lower strata of society to significantly deteriorate. Prices of basic goods have doubled and tripled in the recent years, and the prices of real estate have sky-rocketed to astronomical levels. The objective conditions are ripe but the subjective conditions within society as a whole remain unclear.

Revolutions have their own dynamics and certain processes can accelerate greatly under revolutionary conditions. The lies of the regime are only a manoeuvre to win some time and diffuse the movement, but this cannot be sustained for long. If the movement manages to keep the pressure on long enough, then it is more likely that more and more layers of society will be joining. Things are changing by the day and hour now. And even if the movement should be defeated in the short term, such a defeat would only serve to prepare a more widespread and more powerful movement in the future. The regime will not be able to meet any of its promises in any significant way, and any reforms it may concede in these conditions will merely be cosmetic. The conditions of the masses are only going to get worse, and the lies of the regime will soon be revealed.