The revolution in Kyrgyzstan has de facto overthrown the old hated regime and led to a new interim government being installed. Now a stand-off is developing between the two forces. The movement that led to this situation was a revolution from below, an uprising of the most downtrodden layers of society, who organised themselves in their own elected councils. Now there will be an attempt to emasculate these councils and divert attention away from the real issues. 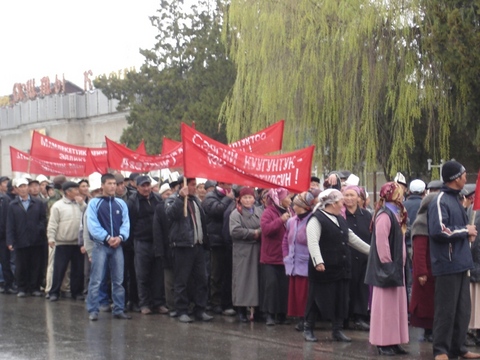 The rebellion in Kirgizia has been increasing as each hour has passed over the last two days. In all Northern Kirgizian cities clashes between demonstrators and police have been continuing. At least 100 demonstrators have been killed by the police. The people have taken and looted several police departments. The people proceeded to disarm the police and the special riot police, while government loyalist snipers have been shooting from the rooftops. In Bishkek army units were brought in, but faced with all this, the people overcame the repressive forces and President Bakiyev has fled to the city of Osh where he is attempting to hold out and refusing to resign.

As result of the “tulip revolution” five years ago, clans from the South were able to climb to power in Kirgizia. In contrast to Aslan Akaev, who was had been ousted from power, the new leader Kurmanbek Bakiyev presented himself as a “strong man” as is typical for this region. He arrested leaders of the opposition and surrounded himself with relatives. He then proceeded with a wave of privatisations, including electricity and telephone services. Privatisation led to price rises; for example, the prices of electricity and water supply doubled.

The opposition, exploiting the anger of the masses, raised a few social and political demands, including the cancelling of municipal price rises, the nationalisation of privatized companies, the pushing out of Bakiyev’s relatives and the release of some political prisoners.

The main forms of protest were through the “kurultais” (conventions), first in Bishkek (17 March) and later on 7 April in other regions of the country where opposition leaders were planning rallies, including the leader of the Social Democratic Party, Roza Otunbaeva. To stop the “kurultais” the government ordered mass arrests of opposition activists, but the result was the opposite of what they had expected. Tens of thousands of people demanded the release of Bolot Sherniazov, the leader of the opposition Ata-Meken party in Talas. Finally he was freed when thousands of people surrounded the police headquarters. 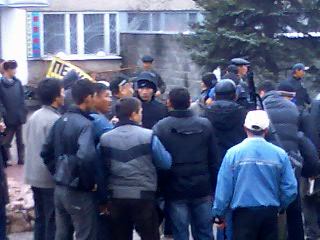 The demonstrators then demanded that the local governor should support the opposition, and later appointed a new governor. In the night from 6 to 7 of April special police units were brought in by plane from the capital to Talas. But in the morning of 7 April between 11 and 12 thousand people took over the police department and seized all the weapons. Kirgizian Minister of the Interior, Molomus Kongantiev, organizer of the repression, was beaten to death by the people.

On 7 April the revolution came to the capital Bishkek. People marched to the Government House and smashed through the walls with trucks. Police opened fire with live ammunition. Some people were injured. At the same time demonstrators occupied the local administration building in the town of Kerbene and raised the flag of the rebellion. Special police forces shot a few times at the people, but this did not deter the demonstrators. On the contrary, the police, in fact, had to run away.

Later in the local kurultai a new local leadership was elected. At 5pm the rebels captured a TV station in Bishkek and appealed to the people of Kyrgyzstan. At 9pm the government of Daniar Usenov was forced to resign and a new “interim” government trusted by the people, lead by Roza Otunbaeva took control of the country in the North.

However, this is not the end of the story. The struggle between the poor South and the wealthier North could develop into a civil war. Many people in the South have family links with Bakiyev and on this basis took key positions, not just in politics but also in business. They are ready to defend their wealth even with weapons. Bakiyev, holding on in the South, has offered to talk to the opposition and its new interim government. But its leader Roza Otunbayeva has not accepted the offer and has demanded that he resign.

In this situation it is important to look at the social aspect of the movement and explain that it is not between the people of the South and the North, but a class movement of the most downtrodden and poor layers of society against the wealthy elite. Through this it would be possible to prevent a fratricidal war from developing. For the poor people in both the North and the South there would be nothing to gain from such a war. What is most important is to develop and to keep the kurultais functioning. The experience of the direct election of local leaderships is an important one and these should remain in place and be used to control that the opposition leadership keeps its promises.

It is very important not to allow the revolution simply to be side-tracked onto the Russian-American conflict over the fate of the “Mana” air base used by the USA for its operations in Afghanistan. The USA should get out of Kirgizia, of course, but Russia also should leave its bases. New Kirgizia does not need Russian and American puppets; it needs genuine people’s rule, with the workers in control of politics and the economy. And the only guarantee of the survival of the revolution is that it spreads to the whole of Central Asia and the CIS, and beyond.