Germany
Share
Tweet
Altogether 55,000 people came out onto to the streets on March 28 in Berlin and Frankfurt/Main as part of Saturday's protests across Europe. The speeches and the comments of workers and shop stewards show that major class conflicts are being prepared in Germany in the coming period.

Altogether 55,000 people came out onto to the streets on March 28 in Berlin and Frankfurt/Main in Germany to protest the fact that the costs of the current economic crisis are being passed on to the workers and socially weak layers of society. The demonstration was organised by a broad alliance of trade unions, members of Die Linke, left groups and environmental organisations.

On Saturday around 30,000 demonstrators responded to the appeal of the "We Won't Pay For Your Crisis" alliance in Berlin. On the same day there were also demonstrations in Frankfurt/Main, London, Paris, Vienna and other European cities. The police initially estimated 5,000 participants, but already by the evening the bourgeois press quickly agreed on the figure of 15,000. But according to the information of the organisers there was a permanent presence of around 25,000 and in total around 30,000 people participated in the protests in Berlin. 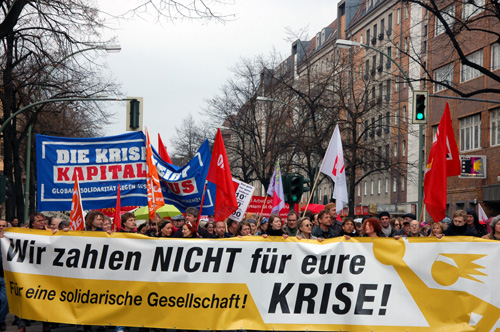 The mood amongst all the participants was very radical. The fact that the working class is being forced to foot the bill for the crisis of capitalism is sinking more and more into the consciousness of ordinary working people, and school and university students. There were more people present than the "usual left scene". Whole trade union branches and areas issued a call to take part in the demonstration despite the trade union apparatus attempting to sabotage the mobilisation. These demonstrations can and must be used as a starting point for a "hot" spring and summer of working class militancy. Also in Germany this idea is beginning to sink in amongst the rank and file of the trade unions and Die Linke and a movement against the effects of the economic crisis and the attacks against the working class will emerge. 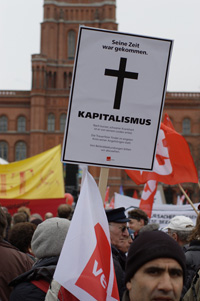 One highlight at the end of the demonstration was certainly the speech of Gregor Gysi [joint parliamentary party leader of Die Linke in the Bundestag]. Very radical in words, he demanded the expropriation and nationalisation of all the big banks and spoke about the failure of capitalism. But it is now the task of the revolutionary left inside Die Linke to make sure that socialist deeds will follow these anti-capitalist words. What is also required is to raise the demand for further nationalisations of the major companies under workers' control, reducing the working week without any loss in pay and for a political general strike. These demands should be carried into the existing protest movement and the fight back should be organised on the streets and in the workplaces.

At the margins of the demonstration in Berlin there were repeated attacks of the police on a section of the protestors. Especially the so-called "Black Block", the anarchist and Autonomous groups, was repeatedly provoked but also accepted the provocations. But, according to the organisers, there were also some trade unionists who were arrested by the police. It can only be assumed that the police consciously attempted to escalate conflict in order to discredit the whole movement. One person taking part in the demonstration reported that on the edge of the demonstration a ton of cobblestones was initially being guarded by one police unit, but when the demonstration passed by the police pulled back leaving the stones unguarded, clearly inviting demonstrators to make use of this "ammunition". We should not let them use these tactics to divide us! Only united are we strong!

In Frankfurt/Main two demonstrations started out at 12 o'clock in rainy weather. Demonstrators from the south and west of Germany marched through the banking district of this Rhine Main Region metropolis. There were numerous flags of the trade unions, Attac and the Die Linke party.

Also active SPD members joined the demonstration, like the local council spokesperson Bernd Mürdter from Münster near Darmstadt. "The social imbalances are increasing more and more. We need a different kind of politics" explained Horst Raupp of the SPD working group for employee issues (AfA) in Hessen-South. As a pioneer of the banking critics, Gregor Böckermann of the initiative "Religion for peace" has been demonstrating for 19 years against the policy of the German banks: "Initially we demanded debt cancellation for the third world. Then we realised that also in Frankfurt the poorer were getting ever poorer. We have to abolish capitalism, because it no longer provides hope for the world." 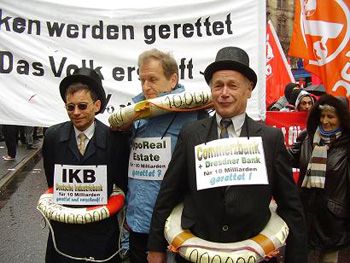 Another woman from Frankfurt was symbolically collecting donations under the slogan "bread for the banks". "The banks are getting rescued, while the people drown", complained Attac activists from Wiesbaden, who were dressed up in suits, top hats and lifebelts, impersonating the bosses of IKB, Hypo Real Estate and Commerzbank. Friedhelm Winkel of the Hanau Social Forum was of the opinion that "turmoil on the streets can contribute to stopping capital and the government pushing through their plans."

At the front of the demo Lothar Reininger said that he "cannot bear the thought that for years gambling has been going on in these towers [referring to the bank skyscrapers] and profits have been shifting to the rich while wages have been falling."

Marcel Bathis, shop steward at the Frankfurter Rundschau newspaper, reminded everyone that an unbridled capitalism led in the end to fascism and war about 80 years ago. "We have to stop those gentlemen at the top making us pay for the rubbish they are producing", explains a shop steward from the ver.di trade union working in a transport company in Frankfurt.

"In this country we don't have a conflict between young and old; the conflict in this country is between rich and poor", said Leni Breymaier, head of the ver.di trade union in the state of Baden-Württemberg, adding that decent healthcare and fair wages, pensions and unemployment benefits are "relevant for the system". An economic system that sacrifices all this on the altar of profit is "the wrong system" according to Breymaier. 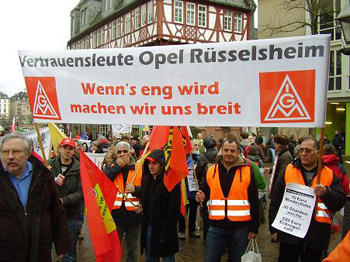 Shop stewards from Opel in Rüsselsheim

Also the crisis in the auto industry brought many people to the demonstration. "Europe without Opel-Saab-Vauxhall is like a car without an engine", read the title of a huge banner of the IG-Metall [metal workers' union] shop stewards at Opel in Bochum. Shop stewards from Opel in Rüsselsheim, where the Opel headquarters are located, set up an information stall and collected huge numbers of signatures for an appeal to the government for "temporary state assistance for bridging a short and difficult situation". The signatures were going to be handed to Chancellor Angela Merkel when she visited the Opel factory in Rüsselsheim late in the day, explained shop steward Axel Lemke.

Meanwhile Tom Adler, shop steward at Daimler in Stuttgart, was demanding industrial reconversion towards environmentally and socially useful production as well as a massive reduction in working hours. The current "wrong-way drivers" at the top of the auto industry do not provide either a secure or a decent living future. Adler warned of a wave of bankruptcies and mass unemployment at the latest after the parliamentary elections in September and predicted worsening conflicts. "What started in Greece, Iceland and Ireland will continue here." This will be "the European unity we need." Instead of blowing off steam "the pressure in the cooker has to be increased." 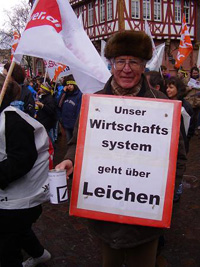 The party chairman and parliamentary party leader of Die Linke, Oskar Lafontaine, instead of raising the only real solution, i.e. nationalisation of the commanding heights of the economy under workers' control, called for a "social economic stimulus package" and wages that can secure a decent living for all. He gave a radical sounding speech saying that tax revenues being used for bailing out companies must be used instead for employee shareholding, so that the workforce can defend their workplaces and practice real workers' participation. (How that can be achieved without outright expropriation he did not explain). "Don't let them divide us, the left has to close ranks", Lafontaine shouted in the direction of the "Black Block" section of the rally, that was protesting with whistles and throwing eggs at the speakers' platform. Trade unionists and members of Die Linke had prepared for such incidents. They formed several human chains in front of the platform and made sure that the potential for confrontation on the rally was contained.

Activists of the ver.di youth symbolically buried capitalism in a coffin with a wreath on top and called for a different social system. Many trade unionists took home a lot of positive impressions from the event - like a member of the IG BCE [trade union in mining, chemical industry and energy] from Heilbronn: "We have to impose justice against the authorities and come out onto the streets in every town nationwide."

All this indicates that a radical mood is developing in Germany, and this is only then beginning.