At 8pm on Monday, gunmen armed with assault rifles opened fire on the streets of Vienna. So far there are reports of four deaths and 15 wounded, of which seven are in a critical condition. Starting in Seitenstettengasse, the attackers carried out shootings at six different places in the inner district of the city. In addition to the civilian casualties, one of the attackers has been shot by police forces. An unknown number of other terrorists have, for now, managed to escape into the city. This is the first major terrorist attack in Austria in 45 years.

At the time of writing this early report, police sirens are constantly heard on the streets throughout the city. The media are calling for people to stay at home or where they are. Meanwhile, Chancellor Sebastian Kurz has addressed the public for the second time in 52 hours. This time, he informed us that: “We the Republic and in particular Vienna, are experiencing difficult times, with an ongoing terrorist (threat)... Thanks to the security forces, the police have succeeded in eliminating one terrorist. Many thanks to the emergency services, the police, the fire brigade and the ambulance service. We are with the relatives of victims. Our international partners are with us. We have at the moment a situation that an Islamist attack is taking place" (this and all further quotes are the author’s own transcription). These were the typical generic words of an increasingly unpopular, notorious self-promoter.

To point to Islam was a privilege which was obviously reserved for Mr Kurz. In a second TV interview, some minutes later, we are informed that:

“Tomorrow's parliamentary meeting has of course been cancelled. What happens tomorrow depends on what happens tonight. Public security is taken over by the armed forces; the task of the police is to catch or eliminate terrorists. People should stay at home. Whether you can go out tomorrow will be decided tonight. It is a very tense security situation. Several professional perpetrators are at large. I am informing you straight from the crisis management team. We are also in good communication with the Viennese mayor. An anti-Semitic reason behind the events cannot be ruled out. There are several suspects, the danger is not yet completely averted. It is not possible to return to normal life. When the danger is over, you can return to your homes. The situation is above all related to the inner city. Please follow the instructions of the authorities."

Before this statement the Austrian president, the Liberal Alexander Van der Bellen, called on Twitter for Austrians to “Defend freedom by all means”. Liberal opposition leader Beate Meinl-Reisinger spoke of an “attack on an open society”, and Social Democratic leader Pamela Rendi-Wagner is quoted as saying that “obviously the parliamentary session tomorrow has to be cancelled” (it was a special session called by the Social Democrats to denounce the plans of the government to attack pension rights for workers who have worked uninterruptedly for 45 years). Meanwhile, the interior minister uses the spotlight to further promote national unity: “It must be made clear. The one who attacks one of us, attacks all of us”.

Today’s attackers, whoever they may be, are purely the offspring of barbarism. It is not fully clear who their immediate target was. In the area where the attack took place, there is the “Israeli Cultural Association”, a synagogue, and the administrative building of the Jewish community in town, but it is also a street full of cafés and restaurants. These cafés were full tonight, as it was a warm evening and the last night before the COVID-19 lockdown, which had been declared – in the penultimate chancellor's speech on Saturday – to be starting on Tuesday morning. 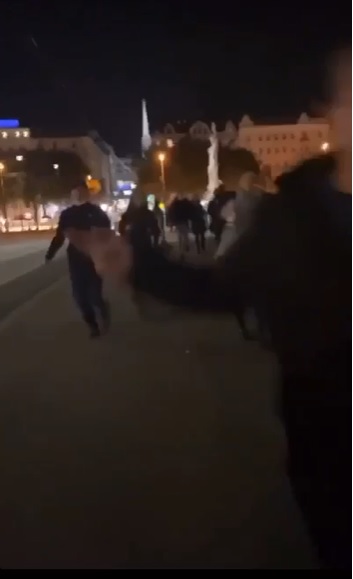 Five have died (including one attacker, killed by police) following a series of terror attacks by gunmen armed with assault rifles in Vienna

Meanwhile, this government and the class it represents had been at war with the people from another angle. At the same time as these barbaric events were taking place, the full failure of the government’s laissez-faire approach to the COVID-19 pandemic was catching up with the country. The number of infected in Austria are skyrocketing and were among the highest rates globally in the last week. This is the result of the policy of “individual responsibility”, which meant that the government did not use the summer to take any serious measures to deal with the pandemic. The lack of any form of contact tracing meant that the virus could spread undetected and is now popping up everywhere. There has not been any hiring of more sanitary personnel, nurses or teachers. Public transport is packed and no measures have been taken in the factories. Within a few days, the hospital capacity will have been reached, and a few days later, hospitals might have to start rejecting the treatment of certain patients due to lack of capacity.

A rare glimpse of the real situation in the public sector was displayed in the reactionary global media circus surrounding the terror attack when an oppositionist shop steward with the public Viennese ambulance service, clearly in a state of shock, said on live TV: “I call all my colleagues to report to duty and call in at their work centres. I was politically inspired by Mayor Zilk (the mayor of Vienna between 1984-1994) who said: ‘I guarantee every Viennese person an ambulance and a hospital bed.’ But now we have COVID-19 and even this terror attack on top of it, and this city grew, but not the number of ambulances.” Following this appearance, the network hurriedly had to present another official assuring the public, with plenty of facts and figures, that there is no lack of ambulances.

At the same time, we see an immense increase in the rate of exploitation of workers in all sectors. As the Industrialists Associations expressed: “The pandemic shows what reserves of productivity we have: 54 percent of the workforce is able to produce at 80 percent capacity.” Nurses are forced to go to work even if they have been tested positive for COVID-19, teachers have to teach their lessons up to four times and factory workers are squeezed amidst a permanent wave of mass layoffs.

Therefore, this attack readily suits the purpose of diverting attention away from the attacks of the ruling class and instead split the working class by means of whipping up racism and fear of “the external enemy”. It is clear that the bourgeoisie will take full advantage of this barbarous attack in order to channel public anger and feelings of insecurity to their own ends.

But we reject all crocodile tears from the representatives of this rotten capitalist system. We are told that many world leaders have sent their condolences. But Boris Johnson does not speak for the British workers; neither does the warmonger Emmanuel Macron speak for the French people when he offers a special relationship to the Austrian government. We must not forget either the policies of our own government and its inhuman positions. Chancellor Kurz openly advocated the necessity of migrants dying in the Mediterranean. He sent Austrian special police to Greece to block desperate migrants coming via the sea. The insane and atrocious terror in our cities is a price we, the ordinary people, have to pay for the wars and constant humiliations inflicted and organised by the ruling class.

It is capitalism that cultivates the cancer of terrorism and barbarism. And yet we are constantly told that the real problem in society is the migrants, the poor and the oppressed. But reality cannot be done away with reactionary racism. What this event reveals is the global crisis of capitalism and the resulting instability being reflected in Austria. In the last analysis, the implications of this process are revolutionary. In the face of all forms of capitalist barbarism, we raise the banner of revolution, of class unity and the struggle for socialism in our lifetime.