Austria
Share
Tweet
We have received this report of the recent Student Parliament meeting in Austria, which passed a resolution in solidarity with the massive mobilisations in France as well as organised a rally outside the French embassy in Vienna. See also in German. 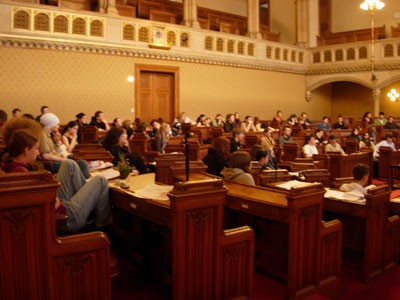 Millions of students and workers demonstrated and took strike action again across France today against the First Employment Contract (CPE) and precarious working conditions. In support of this massive protest movement activists of the Floridsdorf Socialist Youth brought a resolution to today’s School Students’ Parliament in Vienna, in which we expressed our solidarity with our fellow students and workers in France

The resolution was accepted by a large majority of the 70 student representatives. People in Austria, particularly the youth, are confronted with similar problems as in France. Cutbacks to social programmes, education, and unemployment are not foreign words in Austria. This is one of the reasons the resolution was accepted. The second reason lies in the increasingly stronger desire for international solidarity. The common problems with the government and with the economy arouses an urge for common actions. After the session a delegation of about 20 participants of the Student Parliament went to the French embassy to hold a short rally. 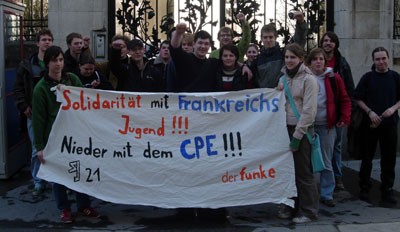 Most of those present had the opinion that although we had just fulfilled our modest duty, that we should continue to organise activities over the coming days and weeks. We want to inform our colleagues in the schools about events and build a wide movement in solidarity with the movement in France.

This is the meaning of international solidarity!