Details
Hands Off Venezuela - www.handsoffvenezuela.org
13 May 2006

Share
Tweet
Last night at the Arena cultural centre in Vienna, President Chavez spoke to an audience of 5,000 enthusiastic young people in a mass meeting organised by Hands off Venezuela and Cuba, the Austrian section of the HOV international solidarity campaign that is now active in more than 30 countries. The meeting was a spectacular success. It was the biggest public meeting held by the Left in Vienna for as long as most people can remember.

Last night at the Arena cultural centre in Vienna, President Chavez spoke to an audience of 5,000 enthusiastic young people in a mass meeting organised by Hands off Venezuela and Cuba, the Austrian section of the HOV international solidarity campaign that is now active in more than 30 countries. The meeting was a spectacular success. It was the biggest public meeting held by the Left in Vienna for as long as most people can remember. Peter Kreisky, the son of the former Chancellor of Austria, Bruno Kreisky, said he could not remember anything like this for 30 years. 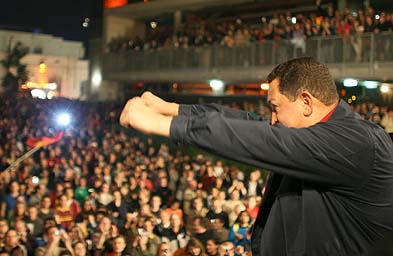 The rally, which was called to coincide with the EU Summit on Latin America, was set to start at 6.30pm. But because of unforeseen difficulties, the President was delayed for several hours and the rally finally began at 10 pm. Since many people had already started queuing at 5pm, this meant a very long wait! Nevertheless, the mood was vibrant and good humoured throughout, and the crowd passed the time chanting, singing and waving a sea of red banners.


The capacity of the meeting hall in the Arena is about 800, but at the last moment the management decided to impose a maximum of 400 on grounds of safety. The organisers, with the help of the Casa Militar (the Presidential security team) had already fixed up a big screen outside in the spacious courtyard, so that many more people could watch the proceedings outside.


In the event, everything had to be changed. As time passed, more and more people kept arriving. The hall was filled before the doors were opened and hundreds of people – overwhelmingly youth – poured into the courtyard. The organisers began to calculate numbers – a thousand, two thousand, three thousand. Soon the place was full, literally to the rooftops. Even the police estimated 3,000. In fact there were at least 5,000 in the precinct, and several hundreds more who could not get in and had to stay on the street.

It was fortunate that the start of the meeting was delayed because all the arrangements had to be scrapped. The tribune was moved outside on a balcony facing the courtyard and a sound system was hastily rigged up by the staff of the Arena, who were very helpful.

There was a nervous moment at the start because the word was put out that the President would not attend the meeting. It was true that, because of a very hectic agenda at the Summit, it was extremely difficult for him to come to the meeting, but the day before he had told the organisers; “I know about this meeting and will do everything in my power to be there.” And he kept his word. At about a quarter to ten the presidential car swept into the precinct and Chavez stepped onto the platform amidst a storm of applause.

On the platform there were many prominent figures in the Bolivarian Movement. Nicolas Maduro, the President of the National Assembly, Juan Barreto, the mayor of Caracas, as well as the Minister of Planning, Jorge Giordani and Eva Gollinger, the author of The Chavez Code. Ruben Linares, one of the national co-ordinators of the UNT, was also present, as was the Cuban ambassador and a group of 20 Cubans from the embassy and the Instituto Cubano de Amistad de los Pueblos.

A number of high-ranking officials of the Austrian Trade Union Federation (ÖGB) were also present. The meeting was chaired by a young shop steward and member of HOV, Axel Magnus.

Apart from Chavez, there were only two speakers: Aleida Guevara, the daughter of Che Guevara, and Alan Woods, founder of the international Hands Off Venezuela campaign, who sat on either side of the President. Aleida opened the meeting with an impassioned speech, in which she recalled the heroic struggle of her father and which she urged the youth to continue. She laid particular emphasis on the campaign to free the five Cubans illegally being held in US prisons.

For the benefit of the many Latin Americans in the audience, Alan Woods addressed the meeting in Spanish. He started his speech, which was interrupted by frequent and enthusiastic applause, by remarking: “And they say there is apathy among the youth! Welcome, apathetic youngsters! (laughter and applause). The youth are not apathetic! The youth need a cause that is worthy of them, a banner, a vision and a dream!” He went on to quote the (in)famous statement by Francis Fukuyama that history has ended: “History has not ended. This is history. They are making history in Venezuela. And you are making history.”

Alan continued: “There are many meetings in Vienna right now. But there is no meeting like this one. We have not come here just to talk and then go home and forget about things. This meeting must be the launching pad for organising a great movement of solidarity in every country in Europe.” He appealed to all present to join HOV. To judge from the response of those present, this appeal did not fall on deaf ears.

Alan was followed by Emanuel Tomaselli, the national organiser of HOV (Austria) who briefly introduced President Chavez. He said: “Life is a struggle and today we have won a battle. On the one hand, it was very difficult to assure the presence of President Chavez at this meeting. On the other hand, it was very easy, because we always knew that he would prefer to be here with the revolutionary youth than to dine with the Presidents who are fooling their own peoples.”

When President Chavez approached the podium he was greeted with deafening applause and a sea of waving red flags and chanting, He spoke for about two hours, and his main theme was the need to fight against imperialism and capitalism that are destroying the planet and placing the human race in danger. He quoted the words of Rosa Luxemburg: “The choice before humanity is socialism or barbarism.” And he added; “When Rosa Luxemburg made this statement, she was speaking of a relatively distant future. But now the situation of the world is so bad that the threat to the human race is not in the future, but now.”

He went on: “When I was a kid of 15 we had May 1968, the Beatles, John Lennon and the war in Vietnam. We looked to the future and we thought that by the year 2000, the world would be a different place, a better place. But the years have passed and instead of improving things have got much worse. What has happened? They have stolen my future. Imperialism and capitalism have stolen my future. And now that I am in my fifties, I am convinced that people of my generation must spend every day, every hour, every minute of our lives fighting for a better world – a world free from poverty, inequality and injustice. That world is called socialism! I believe that only the youth have the necessary enthusiasm, the passion, the fire, to make the revolution. Let us unite to save the world. Together we can succeed!”

The President’s speech was received with wild applause and the cheering and chanting went on for a long time, as he took a red flag from one of the audience and waved it in the air. Then, quite spontaneously, the crowd started to sing the Internationale. It was an emotional end to an emotional occasion. It was past midnight and for hours later groups of people were still standing in the precinct, discussing the ideas of socialism and revolution in a way that has not been seen here for many years.

The curse of disunity

A huge amount of effort was put into organising this meeting. A total of 7,000 posters were put up by HOV activists all over Austria, to advertise the meeting. A very active role was also played by the Austrian Young Socialists and the Alternative students, who, in contrast to others in the Alternative movement, actively backed this meeting and participated with energy and enthusiasm.

Unfortunately, not everyone shared the enthusiasm for this meeting. Some of the organisers of the so-called Alternative Summit clearly wanted to impose a monopoly on the visit of President Chavez. Despite repeated attempts of HOV to achieve unity, every approach was met with a rebuff. Once again, unfortunately, the Left suffered from the traditional disease of sectarianism and disunity.

The conduct of some of the opponents of HOV can only be described as sabotage. All kind of irresponsible rumours about HOV were put in circulation and a malicious campaign of misinformation was launched. Matters came to an extreme when the former head of the Austrian CP, Walter Beier, on the eve of our meeting, stated in the pages of The Standard, one of the main papers, that the idea that President Chavez would speak at this meeting was “nonsense”. In fact, the rumour was widely circulated that the president would not come. As late as 11 pm the television was reporting that President Chavez had returned to his hotel. At that time he was half way through his speech at the Arena!

All kinds of other obstacles were placed in the way, which we will not bother to enumerate. It is sufficient to say that all the strenuous efforts to boycott the HOV meeting ended in an abysmal failure. The meeting was an outstanding success. At the end of his speech, President Chavez publicly thanked Alan Woods and Hands off Venezuela for having organised such an outstanding meeting.

The message is plain; it is time to put an end to the disunity, to stop trying to marginalise HOV – the oldest and by far the most successful campaign of solidarity with Venezuela, and the only solidarity campaign of an international nature. It is necessary to put aside secondary differences and unite in action to defend the Venezuelan Revolution against its external and internal enemies. That was, and still is, the position of HOV and we invite all those who sincerely value the cause of the Revolution to join with us in common struggle from now on.

The rally of May 12 will be of enormous international significance, particularly since Austria currently holds the presidency of the European Union. Media from all over the world were present: over 60 newspapers, press agencies and TV companies were there. In Venezuela the meeting received the widest coverage imaginable. Here in Vienna the press reported that Chavez had made an extremely radical speech calling for revolution and socialism. The ruling class and their hired press are most unhappy, but the workers and youth of Austria and the rest of Europe are delighted.

Imperialism is not just the USA. The EU has been pursuing an increasingly hostile foreign policy towards Cuba and has condemned last week’s measures by Evo Morales to take control of Bolivia’s hydrocarbon resources. It is no secret that Europe’s strategists of capital share Washington’s “concerns” about the swing to the left in one Latin American country after another. Because of this it was important to show that there is a different Europe as well – that ordinary working people and students support the cause of the Bolivarian Revolution and of socialism in Europe and the whole world.

This historic meeting was a giant step forward for international socialism.

Note: We will be publishing more photos from the meeting later on. For other reports (in Spanish), see VTV, ABN, MinCI , Prensa Latina , Cuba , Terra , España