Correo del Orinoco is a national daily newspaper in Venezuela run by left wing PSUV leader Vanessa Davies. The paper has a print run of 100,000 copies. In its edition on April 14 it published a full page interview with Pakistani Marxist Lal Khan. 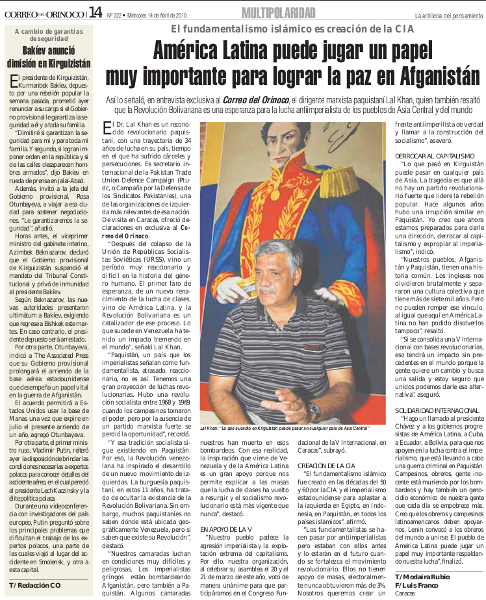 Dr Lal Khan is a well known Pakistani revolutionary, with a record of 34 years of struggle in his country, including having been persecuted and serving time in prison. He is the international secretary of the Pakistan Trade Union Defence Campaign (PTUDC), one of the most important left-wing organisations in that country.

“After the collapse of the USSR there was a difficult and reactionary period in the history of humanity. The first beacon of hope, of a new renewal of the class struggle, came from Latin America, and the Bolivarian revolution acted as a catalyst for this process. What is happening in Venezuela has had a big impact throughout the world”, Lal Khan pointed out.

“Pakistan is a country which the imperialists describe as being fundamentalist, backward and reactionary, but this is not true. We have a long history of revolutionary struggle. There was a socialist revolution in 1968 and 1969, when workers and peasants could have taken power, but because of the absence of a strong Marxist party, the opportunity was lost”, he reminded us.

“That socialist tradition still exists in Pakistan. For this reason the Venezuelan revolution has been an inspiration for our left-wing movement. In the last 11 years, the Pakistani ruling class has attempted to hide the existence of the Bolivarian Revolution. However, even though many Pakistanis do not know where Venezuela is on the map, they do know about its revolution,” he stressed.

“Our comrades are fighting in very difficult and dangerous conditions. US imperialists are bombing Afghanistan but also Pakistan. Some of our comrades have been killed in these bombings. With this reality that we face, the inspiration coming from Venezuela and Latin America helps us because it allows us to explain to the masses that the class struggle is on the rise again and that revolutionary socialism is more relevant than ever”, he underlined.

In support of the Fifth

“Our people are suffering imperialist aggression and the overexploitation of capitalism. For this reason, our organisation, when we held our conference on March 20 and 21 this year, voted unanimously to participate in the founding of the Fifth International in Caracas,” he said.

Created by the CIA

“Islamic fundamentalism was created in the decades of the 1950s and 60s by the CIA and US imperialism in order to smash the left in Egypt, Indonesia, Pakistan, and in all the Islamic countries”, he stated.

“The fundamentalists pretend to be anti-imperialists, but they were together in the past and they will support them in the future when the revolutionary movement becomes stronger. They have no mass support, and they have never received more than 3% in elections. We want to create a genuine anti-imperialist front and struggle to build socialism.”

“What happened in Kyrgyzstan can happen in any Asian country. The tragedy is that there was no strong revolutionary party to lead the people’s revolt. There was a similar explosion in Pakistan a few years ago. I think that now we are getting ready to provide it with a leadership, so that we can overthrow capitalism and expropriate imperialism”, he pointed out.

“Our peoples, in Afghanistan and Pakistan, have a common history. The British divided us brutally and separated a collective culture of more than 7,000 years. But they cannot break those links, in the same way that they have not been able to break those links in Latin America” he underlined.

“If a Fifth International is consolidated on a revolutionary basis, this will have an unprecedented impact throughout the world because people want change and they are looking for a way forward and I am sure that together we can provide that alternative”, he said.

“I make a call to president Chavez and to the progressive governments of Latin America, to Cuba, to Ecuador, to Bolivia, that they support us in the struggle against imperialism, which is carrying out a criminal war in Pakistan. Peasants, workers, innocent people are dying because of the bombings and there is also economic genocide against our people which are becoming impoverished.

“I think that the Latin American workers and peasants should support us. Lenin called on workers of the world to unite. The people of Latin America can play a very important role by supporting our struggle,” he concluded.