Share
Tweet
In February the Venezuelan province of Ciudad Bolivar was the setting for a number of remarkable struggles on the part of the youth, the working class and the organised communities. In one of them, a fight against a rise in the prices of bus tickets, masses of youth went so far as to seize the buildings of the local parliament. Ronny Pante and Carlos Rondón, leaders of the local student movement, recount what happened.

Interview with leaders of the local student movement

In February the Venezuelan province of Ciudad Bolivar was the setting for a number of remarkable struggles on the part of the youth, the working class and the organised communities. In one of them, a fight against a rise in the prices of bus tickets, masses of youth went so far as to seize the buildings of the local parliament. Ronny Pante and Carlos Rondón, leaders of the local student movement, recount what happened.

PL: First of all, I think it is necessary that you tell the readers of In Defence of Marxism a bit about yourselves, your political background, the Integrationist Movement of Students (MEI), etc. 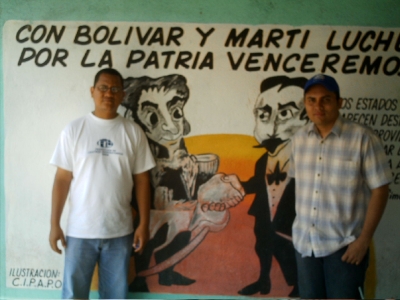 My name is Ronny Pante. I am a student at the University of Simon Rodriguez, the UNESR, located in the Proceres, a working class and popular neighbourhood of Ciudad Bolivar. I started studying here in the year 2001. Before that, I was mainly involved in ecological and cultural work in my neighbourhood. But when I began studying at the University I realized that it was necessary to begin work in the student movement. This was the reason we set up the MEI, the Integrationist Movement of Students in 2002.

At the beginning, the MEI was mainly a tool that we used to fight for better conditions in our everyday life, for free access to the University, for decent student transport, etc. In short, we began as a group of rebellious youngsters fighting for bread-and-butter demands, the daily needs of the student youth. We did not have any worked-out ideology or a scientific starting point. But slowly we learned through the struggle, we began to generalize and we studied the works of Bolivar, Simon Rodriguez and especially Che Guevara, and this led us to adopt a more profound revolutionary standpoint.

CR: My name is Carlos Rondón and I am a student at the UNESR as well. When I began here in 2002, I immediately joined the MEI movement, where we got involved in the fight against the bosses’ lockout in December/January 2002-03. At the University there are a number of teachers and functionaries that actively support the opposition. At that time they also tried to shut down classes. The MEI responded by calling student assemblies and with propaganda against the lockout. We succeeded and classes remained functioning, despite the sabotage of the opposition.

In 2003, many of us comrades in the MEI began to develop ourselves politically when we went to Cuba on a long trip with the Frente Francisco Mirando [a national youth organization in Venezuela]. Here we were able to discuss political perspectives in an internationalist fashion, and we began to see that the struggle is not just about daily demands, but a united struggle against imperialism and its capitalist policies.

PL: Recently there was a huge struggle in Ciudad Bolivar against rises in the price of bus tickets. What was that all about?

RP: In Ciudad Bolivar it is the custom that the owners of transportation raise the prices in December with the excuse of the festive season, saying that it is a “special, extraordinary” fee. Thus they managed to raise the price from 500 bolivares to 800 – a lot of money for people living in the poor neighbourhoods. 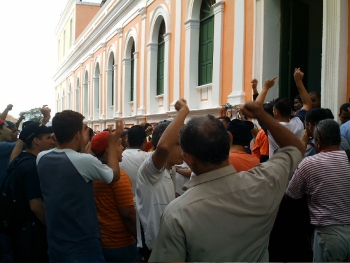 However, this year, when we entered January, the price was still at 800, and people started to get bitterly enraged. In the city, most of the buses are owned by private enterprises and there is one capitalist who is known as the “caballero de hierro” (“iron man”) who owns a great part of them and makes big profits out of it.

The population of the city has grown tremendously, but the infrastructure has remained the same as many years ago, without being renewed to fit the new needs of the inhabitants. The rise in the price of tickets had not been approved by the local authorities, but rumours were going on about the mayor being on the point of giving his signature of approval.

On February 6th, representatives of the student movements in the four different universities in the city met to discuss the situation. We decided to call for a demonstration the very next day. Despite the short notice, more than 200 students went along the march. Our purpose was to protest, but at the same time send a delegation into the local parliament and negotiate. But when we showed up at the doorstep of the local parliament, the mayor had decreed the police to form a picket line, rejecting all entrance to the buildings. The students tried to enter the hall anyway, and this resulted in armed clashes between the police and the students. The police repressed the demonstration and threw teargas at us. Two students were wounded and driven to hospital.

Finally the demonstration managed to get its way into the city hall and effectively take it over, until they would listen to us. At this, the politicians made concessions and approved that the price rise be taken off the agenda.

CR: But this was not the end of the story. The owners of transportation did not take this easily. They began to stop all the buses in Bolivar, following the call of US foreign minister Condoleezza Rice. The local mayor and councillors had a secret meeting with the owners of transportation where they conspired to go against the agreements that we had won. We called a new student demonstration with around 150 present. Without buses, the situation in the city was so chaotic that the military had to insert public buses to meet the daily needs while the private ones were not running. 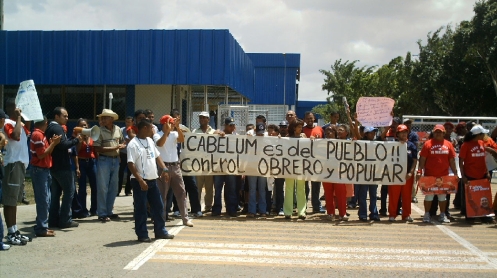 In the end the owners of transportation and the local politicians had to back off and agree – at least for the moment – to follow the common agreement that hinders any rises in ticket prices.

PL: Another important struggle here has been the one taking place in the nearby factory CVG Cabelum. Could you tell us about that?

RP: Cabelum is a factory on the outskirts of Ciudad Bolivar, that employs around 300 workers. It produces electricity cables. Though it is owned by the state, there have been a number of cases of corruption, mismanagement, etc.

In December last year, the Venezuelan government decided to put a new president in place, Manuel Arsienieger, a former functionary in the CVG [cooperation of state firms in Guayana] and well-known for his stand on the left. This was in order to promote a new state policy, the so-called cogestión [co-management], where the workers and community are supposed to control production together.

Manuel began to help the local community with various reforms. He gave certain parts of the surplus in the company budget to finance social projects. For example, to help the Barrio Adentro, a programme where thousands of poor Venezuelans for the first time can go to the doctor and get free medicine, etc. Manuel also gave finances for repairs to a local secondary school. Inside the very factory he was also beginning to re-structure the way in which production was run. He wanted a model of cogestión like the one in ALCASA. The people felt for the first time that Cabelum was serving their needs.

But the right wing in the region began a vicious campaign against Manuel, accusing him of all sorts of things in the media. Finally he was removed from office on February 26th. This created enormous discontent among the popular sectors in the nearby neighbourhoods and also among the workers in the factory. There were protests at the factory gate two days in a row. It was composed of representatives of the communities, students and workers. The workforce at Cabelum threatened to go on strike. 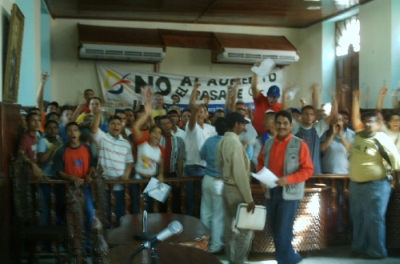 All this obviously exercised enormous pressure on the newly appointed president. He has now committed himself to enter into a dialogue with us. The students in the struggle proposed that assemblies be held every week, where the main decisions should be taken by elected representatives of the workers and the leaders of the community organisations. On March 9th, the first meeting was celebrated with the new president and some agreements have been made, but it is still an open struggle where we need to fight for the complete running of the plant by the workers and the community.

PL: The ongoing struggle at your university (UNESR), what is it about?

CR: The experimental university of Simon Rodriguez, UNESR, is a national University with 20 nuclei in 16 regions. In the past it was dominated heavily by the corrupt functionaries and bureaucrats of AD, Democratic Action, one of the old discredited parties in Venezuelean politics. But when the Bolivarian government of Hugo Chavez began to reform our society it initiated a process of re-organization of the UNESR. The man elected to do this was Emil Calles, a known member of the Communist Party. He was appointed principal and started to approach the student movement and actually listen to the petitions of the students. This made him very popular among the students as well as the teachers.

But last Saturday he was removed from office by sectors within the state apparatus that denounced him as corrupt. The students have responded massively, and immediately afterwards there was a national mobilization in Caracas with people coming from all the provinces. Some agreements have been made with the new principal, but we need to step up our effort so that he will follow the progress made from 2000 onwards.

PL: All in all, what do these three examples tell us about the revolutionary process and the changes taking place and the level of consciousness in Venezuela?

CR and RP: Basically it shows that we still have a long way to go in Venezuela. The bourgeois state is still in place and is acting against the revolutionary measures adopted by Hugo Chavez. Time and again, it is becoming clear for the masses that they cannot trust most of the people in the state machinery. There exist reformist sectors hiding behind the Bolivarian colours that do not really want the revolution to continue but would rather make concessions to imperialism. They are sabotaging the revolutionary process from within, and this forces them to confront with the most conscious sector of the movement time and again.

Many people are also drawing the conclusion that we need to govern the very means of production ourselves. The struggle against the price rise is quite a good example; it showed us that it is the organised people that need to control and direct the transportation system.

This is also the analysis of the International Marxist Tendency, which we would like to thank a lot. This organization has really understood our Revolution very well and made the effort to actively intervene in it and help out the most militant layers, like ourselves, with a theoretical guidance.

We are entering a new critical phase in the revolutionary process where these ideas are beginning to pick up more support, exactly because more and more activists day by day are learning that the daily struggles are part of a big battle against capitalism. A battle that we need to win decisively.