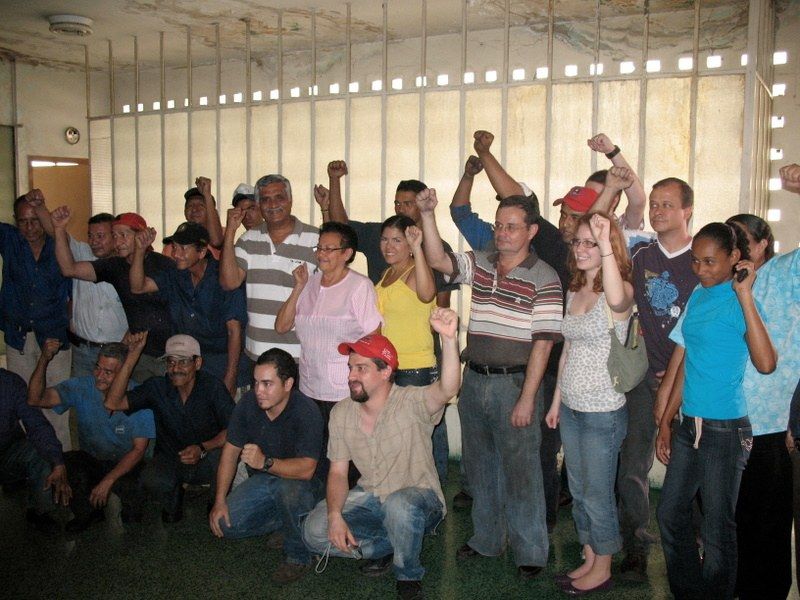 A delegation of comrades of the IMT from several countries is visiting Venezuela, attending the congress of the Venezuelan Marxists and bringing support for the formation of the Fifth International. On their first day they were taken on a tour of the INAF factory, which has been occupied by the workers and is under their management.

Since it was announced by Venezuelan President Hugo Chávez last November, the International Marxist Tendency has fully supported the initiative to launch a Fifth International. It is with this in mind that a delegation was sent to Venezuela to participate in the founding conference. Unfortunately, at the last minute, the conference was postponed until after the parliamentary elections in September. However, the delegation has still taken advantage of travelling to Venezuela to explore the revolution more deeply and to talk with some of its protagonists.

Our first full day in Venezuela resulted in a very early morning and a nearly two-hour trip outside of Caracas to the industrial state of Aragua. Here, we took the opportunity to visit INAF, a factory that was occupied by its workers in 2006 and who have proceeded to re-start production there. The workers at INAF are currently bravely fighting to have the factory legally recognized as being expropriated; they feel that this will help to give the factory more flexibility and secure its future.

Our tour of the factory was led by Leon Bautista, the president of the co-operative at INAF. INAF used to produce plumbing supplies to PDVSA, Venezuela’s state oil company. PDVSA cancelled the contract and since then, the workers had shifted to producing consumer plumbing. Leon took us around the factory, showing us the different moulds and materials that were used to craft the various plumbing parts. Leon described one of the biggest challenges that the workers were facing: repairing all of the machinery that the bosses had let go to waste. In fact, significant sections of the factory were taken up by machinery that had not worked for years. Gradually, the INAF workers are earning the money and expertise to fix some of these machines and to expand the line of products that they can produce for the market.

Leon outlined some of the changes that had occurred in the factory after the workers had taken over INAF. Aside from letting the plant’s machinery fail, the INAF bosses had also neglected to maintain business contacts and supply chains. The workers not only had restored these links, but expanded them. In six months, INAF had done more business than the factory had done in two years under the control of the old bosses. Also, the new worker-controlled factory has taken measures to protect the social well-being of its own workers, something that the bosses had refused to ever do. Previously, if a worker got injured on the job, it would be up to him to get the care he needed out of his own pocket. Last year, one of the INAF workers seriously injured his thumb; the other workers pooled together one week’s worth of wages so that the injured worker could get the quality medical treatment that was needed to help repair the injury. 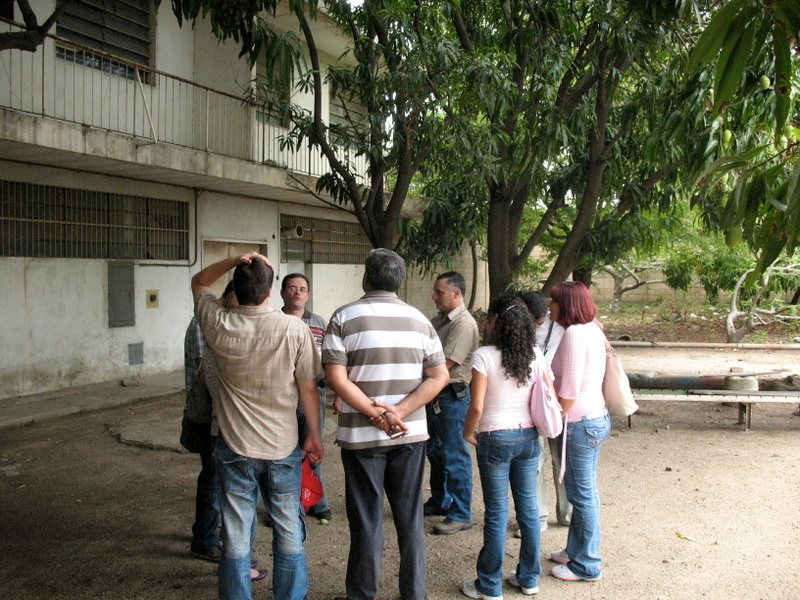 The IMT delegation getting a tour of the factory. Afterwards, Leon took the comrades out into a courtyard on the factory grounds. It was on this spot on June 8, 2006 where the INAF workers took the decision to take over the factory. It was also here where the INAF workers decided to create the socialist workers’ council in 2007. The comrades keenly felt the historical importance of this spot and what this simple courtyard meant for the workers of INAF.

The tour culminated in a lunch-hour meeting of all of the workers at INAF, as well as a couple of workers from the nearby Gotcha factory. Lal Khan, the prominent Pakistani Marxist, addressed the gathered workers and emphasized how proud he felt to have been invited to address the workers at INAF. The workers at INAF were at the forefront of the Venezuelan Revolution and at the forefront of the global struggle against capitalism. Lal also spoke about the revolutionary history of Pakistan and the struggles that Pakistani workers were facing in confronting their own bosses. The rotting capitalist system provides nothing but worsening conditions for workers as bosses try to extract more and more profit out of the labour of workers. The example of INAF truly shows that workers are perfectly capable of running their own workplaces. What was needed now was to deepen the Venezuelan revolution and to transform the entire Venezuelan economy towards socialist production, production geared around the needs of the people rather than production geared around making profit. In this, the Venezuelan workers can serve as a beacon to other exploited workers from around the world in their own struggles to free themselves from the tyranny of capitalism.

The meeting also had greetings from Caio Dezorzi of Brazil. Caio brought updates from the occupied factories movement in Brazil and highlighted the struggles of the Flasko workers; Flasko is the last remaining worker-occupied factory in Brazil. Unlike Chávez, Lula talks about upholding the capitalist system and makes deals with the imperialist countries like the USA. Although the mobilization of workers in Brazil had not yet reached the qualitative stage that the struggle had in Venezuela, Caio said it was only a matter of time. The success of the struggle at factories like INAF could have a decisive impact on future battles elsewhere.

Finally, Camilo Cahis from Canada gave greetings. Camilo told the INAF workers that although most workers in North America have a higher standard of living than workers in Venezuela, they too were under attack from the bosses. Manufacturing in Ontario and Quebec has been devastated and in 2008 and early 2009, workers reacted by occupying a number of factories in both provinces. Camilo hoped that this trip would help bring the experiences of the INAF workers north and serve as an inspiration for Canadian workers, too.

INAF is just a microcosm of the wider revolution going on in Venezuela. The struggles of INAF (and Venezuela as a whole) are a fantastic source of inspiration for the global working class, in its fight to remove the capitalist system.