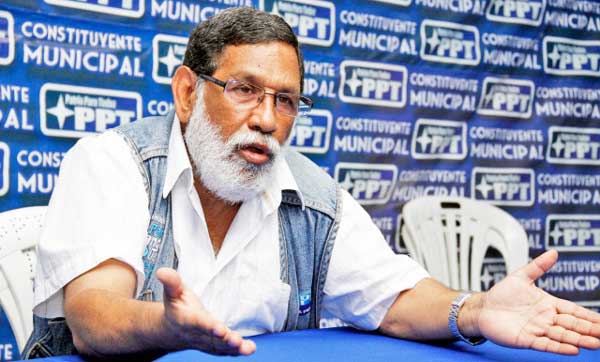 On August 21, the Venezuelan Supreme Court of Justice (TSJ) ruled to depose the current leadership within the Patria Para Todos (PPT), giving them legal control of the party to a minority faction. This is yet another scandalous case of state intervention in the affairs of left wing organisations, which can only be interpreted as a response to the formation of the People's Revolutionary Alternative, which will stand in the December National Assembly election.

At the beginning of August, a series of left wing parties and organisations announced the creation of the Alternativa Popular Revolucionaria (Peoples Revolutionary Alternative), amongst those were the Communist Party (PCV), Patria Para Todos (Fatherland For All), the Revolutionary Party of Labour (PRT), the Venezuelan section of the IMT Lucha de Clases and others. The aim was to contest the December 6 National Assembly elections separately from the PSUV on the basis of a program of defence of the interests of workers and peasants and against imperialism. Both the PCV and the PPT had previously been in an alliance (GPP) with the PSUV and stood jointly in the elections, including the 2018 presidential election.

The decision to launch the APR had been contested by the right wing of the PPT, which had become completely adapted to the policies of the PSUV leadership. After the decision to launch the APR had already been taken, at the end of July, this grouping, led by Ileana Medina and William Rodriguez, had a secret meeting with Jorge Rodriguez from the PSUV leadership to discuss possible support by the PPT for the PSUV in the December elections. The meeting was a scandalous case of horse trading. When Jorge Rodríguez asked them what they would want in exchange, the two representatives from the PPT right wing answered that they wanted 18 candidates for National Assembly member! Jorge Rodriguez answered that this would mean 7% of the Bolivarian members of the NA and that this was “a lot”. But then, in a follow up call, Rodriguez asked Medina “to send a list of names”. The discussion was not about politics but about seats in parliament.

Then on Thursday August 20, the PPT right wing filed a complaint to the Supreme Court of Justice. They allege that the internal process of decision making in the party has been broken. The leadership is supposed to take decisions by consensus, but in this case they had done so by a majority vote. The fact is that they are in a minority in the leadership and amongst the ranks of the party as a whole which will hold its national assembly in a month's time.

Incredibly the TSJ (Supreme Court of Justice) ruled within 24h that the existing leadership of the PPT was suspended and appointed an ad hoc leadership committee to take over the party. The ad hoc committee is composed exclusively of those who filed the complaint and it is given power over the PPT electoral registration. This is the crucial question. In order to be able to register candidates for the December elections parties must have a current electoral registry. Now the PPT candidates which had been provisionally registered will be declared null and void, thus preventing the PPT from officially being part of the APR. Furthermore, if the situation is not reversed, the PPT right wing, now in control, will conclude an alliance with the PSUV, and thus, all those voting for the PPT in the election will be giving their votes to that alliance.

These kinds of legal tricks were already used against left wing revolutionary candidates in the December 2017 local council elections.

On top of this, two other left wing parties have had their internal affairs taken over by rival groups through the intervention of the TSJ. On August 18, the TSJ dismissed the elected leadership of Tupamaros (MRT), a party which is part of the government and appointed an ad-hoc leadership committee under the control of a rival group. The conflict in the Tupamaros is amongst the supporters of Hipólito Abreu (minister of transport) which favour a closer alliance with the PSUV and support the government’s policies, and those who have a more critical line. The National Leadership of the party in January, defeated Abreu’s supporters. The TSJ has now deposed that leadership and handed over the party to Williams Benavides, a member of the national assembly for the PSUV and supporter of minister Abreu. There has also been state intervention in the case of the UPV (the party of the deceased Lina Ron). In both cases, the leadership of these parties has lost control over their electoral registry. The UPV (now under the name of Somos Lina) has joined the APR, while Tupamaros has so far declined but was considering standing its own independent candidates.

After these judicial decisions were taken, the National Electoral Council (CNE) announced that it was postponing the August 19 deadline for registration of candidates for the December elections until August 26. This, of course, will allow the newly imposed leadership of both the PPT and Tupamaros, to register their own candidates and to reach agreements with the PSUV.

To add to all of this, the Communist Party issued a public statement denouncing the fact that on August 18, secret police service SEBIN went to the Communist Party headquarters in Puerto Cabello, in an operation which they described as “routine”. The PCV warned that they would “not be intimidated”.

On August 19 Rafael Uzcátegui, PPT general secretary, had been invited for an interview at TV station Globovisión. The interview was cancelled at the last minute without any explanation.

It is difficult not to draw the conclusion that the state apparatus is acting to prevent or make it difficult for the APR to stand in the elections and to do so on equal footing. This is a complete scandal and a violation of basic democratic rules. First of all, the organisations of the left and the working class should be free from state intervention in their internal affairs. Secondly, the intervention is completely undemocratic as it deposes an elected leadership in favour of a minority group. Finally, the intervention is clearly politically motivated, as it deposes those who favour a line which is critical of and independent from the PSUV and the government.

The PPT national leadership has issued a statement asking for support and solidarity from left wing parties and organisations internationally. The International Marxist Tendency would like to express our strongest condemnation of the actions of the TSJ and demand the immediate reversal of this undemocratic decision. We send revolutionary solidarity greetings to the elected leadership of the PPT and its general secretary Rafael Uzcátegui.

The struggle to build a revolutionary alternative in Venezuela, to fight in defence of workers’ rights, for agrarian reform, for socialism and against imperialism continues, regardless of threats and state intervention.