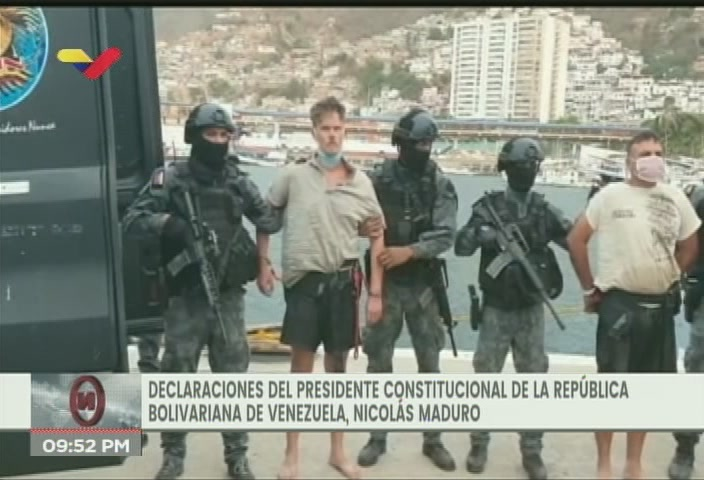 In this article, our Venezuelan comrades in Lucha de Clases analyse the foiled mercenary incursions into the country, and their links to opposition coup plotters and their imperialist masters. Jail for the those responsible! No more impunity!

In the early hours of 3 May, the Venezuelan Navy and FAES (the Special Actions Force of the Bolivarian National Police) foiled a marine incursion by mercenaries on the coast of Macuto, La Guaira. They aimed to commit terrorist and destabilising acts and also conduct a possible assassination against President Nicolás Maduro. Jordan Goudreau, ex green beret and American “security contractor”, has claimed responsibility for this; he trained a group of volunteers and Venezuelan army deserters in Colombia to carry out terrorist operations in Venezuela. He subsequently pointed out that several armed cells already stationed in the country had been activated, and that he maintained direct links with Juan Guaidó in the form of a contract worth $212m, drawn up on the condition that these actions be completed. However, the imperialist puppet reneged on his end of the deal.

As the hours go by, the situation has intensified and become turbulent. In the afternoon of 4 May, a group of eight mercenaries were disbanded and arrested in a fishing community in Chuao, Aragua. The mercenaries are connected with the foiled incursion conducted the day prior. Josnars Baduel led the group of eight; he is the son of ex-general and former Defence Minister under President Chávez, Raúl Isaías Baduel, who later went on to engage in coup plots against the Bolivarian leader. Authorities stated that the organised communities in the town trapped the armed group and delivered them to FANB (the National Bolivarian Armed Forces). Earlier, Prosecutor General Tarek William Saab announced the capture of Gustavo Adolfo Hernández, who is implicated in “Operation Gedeon”. He also made reference to “conclusive evidence” that incriminates Guaidó in the operation.

An article by the Associated Press published on 1 May describes how the army of mercenaries approximately 300 men strong was created. The group was formed of volunteers and Venezuelan army deserters who were trained in Colombia by Silvercorp USA, a firm set up by Jordan Goudreau which was led by Cliver Alcalá Cordones (before he was detained and later surrendered to U.S. authorities on drug trafficking charges) and relied on Juan Guaidó’s backing and financial commitment. In that article, others who helped prepare the mercenary group and later denied their involvement claimed that there was no chance the plan to invade Venezuela would have been successful with an army of hungry, untrained men lacking adequate weapons. Furthermore, the article detailed how Juan Guaidó went back on his commitment to support the plot. This in turn forced them to rely on the improvisation and recklessness of Alcalá Cordones and a certain Jordan Goudreau, who seems to have committed himself entirely to the cause of Venezuelan reaction à la Rambo.

On Sunday 3 May, Venezuelan hard-line right-wing affiliated journalist Patricia Poleo provided incriminating audiovisual evidence and the contract Juan Guaidó, JJ Rendón, Sergio Vergara and Jordan Goudreau signed to carry out the incursion in Venezuela, which the so-called “interim president” failed to go through with. The contract was priced at $212m, with an advance of $50m in order for the first part of the operation to be conducted. This would all be funded with Venezuelan oil.

In light of this, the repulsive and traitorous character of the Venezuelan right has been exposed once again. Although right-wing discord and mediocrity has been the cause of their countless failures, as is currently the case, it is clear that the calls for dialogue and national reconciliation made by government leaders in an attempt to rescue their brand of adulterated capitalism, at the expense of any revolutionary ideal, fell on deaf ears. 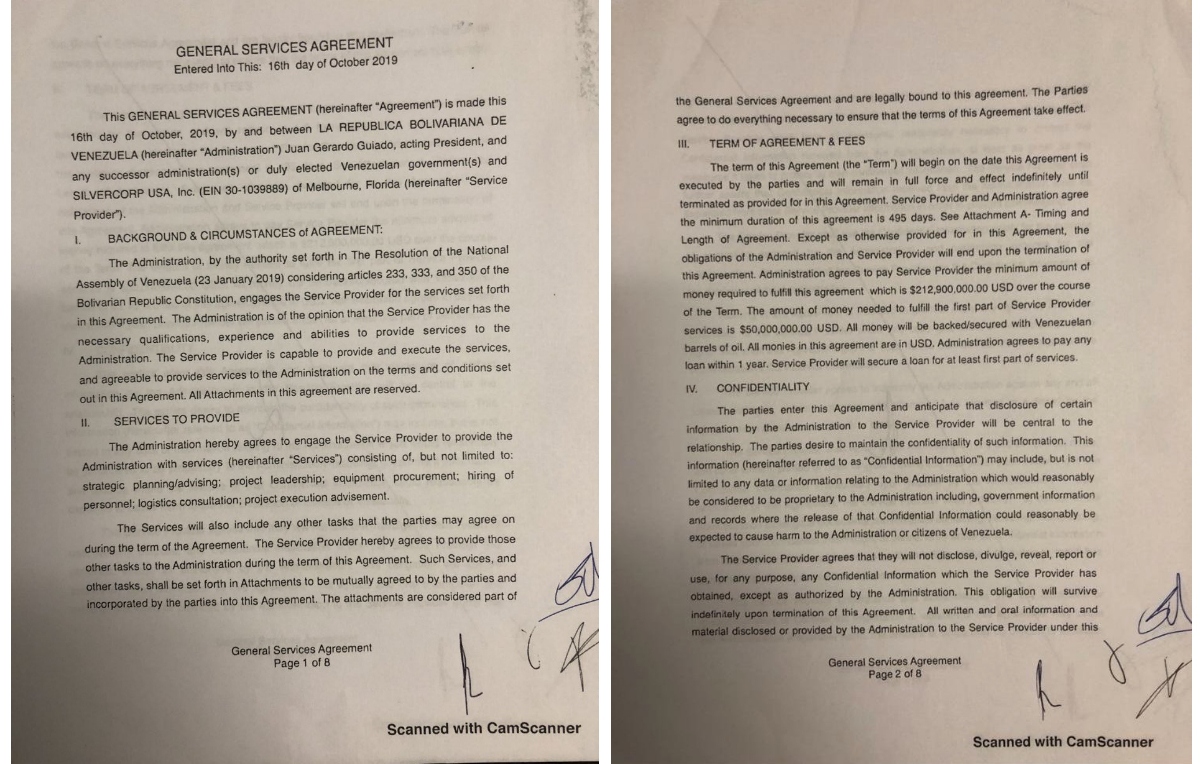 Guaidó’s signature on the contract for “Operation Gedeon” shows his willingness to depose Maduro by violence / Image: FactoresdePoder

As we all know, the Venezuelan reactionary opposition is divided into three main blocks: 1) a conciliatory wing led by Avanzada Progresista (Progressive Advance), MAS (Movement for Socialism) and Claudio Fermín’s entourage, among others, who are willing to enter into pacts with the government. 2) a central steering group known as the G4, made up of AD (Democratic Action), UNT (A New Time), PJ (Justice First) and VP (Popular Will). By far the biggest parties on the right, they are in support of the declining politician Juan Guaidó. And 3) the right wing of the most hard-line, staunch pro-imperialists, composed of María Corina Machado’s Vente Venezuela party (Come Venezuela) and Antonio Ledezma’s Alianza Bravo Pueblo party (the Fearless People’s Alliance). Within this framework, Guaidó has sought to unify the G4 with the more rancid right wing from the outset with the help of forceful (albeit foiled) action, such as the failed coup of 30 April 2019, attempts to realise an unlikely invasion by the U.S. army, and to bring in “humanitarian aid” by force through the border between Colombia and Venezuela on 23 February of last year, as well as on other occasions. Nevertheless, his breach of faith with the far-right’s plans, who expected constant appeals and more decisive action when it came to an armed insurrection, has stirred up divisions between the G4 and the hard-line right. Guaidó’s breach of contract, recently disclosed by Poleo and Goudreau, threatens to bury the artificial leadership of the hard-line right, deepen divisions and exacerbate reproach between the two reactionary sectors.

Guaidó may have ended up distancing himself from the group of mercenaries trained in Colombia due to a later evaluation by him and his imperialist masters regarding the invasion’s limited chance of success, given that the small command group was tasked with facing all of the country’s armed forces. It’s possible that Guaido’s masters realised that, bearing the failure of “Operation Freedom” in mind, splitting away from the united Venezuelan army and its officers is not as easy as they might have initially thought. Evidently, “Operation Gedeon” operates on the basis of its authors’ mistaken interpretation. It aimed to spark rebellion within the FANB and a string of supportive popular uprisings with bold military operations involving the seizure of barracks and specific strategic spaces. Everything seems to point to Alcalá Cordones and Goudreau’s recklessness leading them to continue on with their plans despite the lack of agreed support from Guaidó and co.

Now, the imperialist puppet is trying to deny his connection with Goudreau and “Operation Gedeon”. He had the following to say on Twitter: “Of course there are patriotic soldiers ready to fight for Venezuela, but what happened in Vargas is clearly another distraction ploy…” The links between Guaidó and those involved – who currently have no qualms about accepting responsibility – are, even for the most naïve among us, readily perceivable. Guaidó breaching the contract he signed does not absolve him from responsibility. In the same way, U.S. imperialism cannot be viewed as a simple spectator to the act. Washington has been promoting this type of action ever since they appealed to FANB officials to carry out the insurrections; they put forward the idea of a possible military invasion in Venezuela and announce rewards for any information leading to the capture of Maduro and other senior Venezuelan officials.

In any case, regardless of the scheming and tactics of the various right-wing factions and their reckless characters, it is clear that for the Venezuelan oligarchy and their imperialist masters, economic and political concessions are useless if Maduro’s government is not ousted by any means necessary and if any semblance of popular resistance from the working class is not crushed, which the Bolivarian leadership and their policy of unstated bourgeois reform, both utterly repressive and persecutory, has already made quick work of.

Arrest the coup plotters and terrorists!

Lucha de Clases emphatically condemns the incursions perpetrated by mercenaries and terrorists in Venezuela. We deem necessary the adoption of comprehensive policies to deal with current and future reactionary threats through strengthening and supplying arms to bodies such as the Milicia Bolivariana (the Venezuelan National Militia) and also through the creation of soldiers’ committees within FANB that will closely monitor the actions of military officials and potential conspirators. The actions of those in the Chuao fishing village demonstrate to us how the combative and anti-imperialist spirit of grassroots, working-class and rural groups could easily thwart any rash reactionary operation. If we consolidate this mighty social force through greater revolutionary organisation and reinforcement from popular militia bodies throughout the region, our national defence will be unshakeable.

Juan Guaidó and his accomplices must be arrested as soon as possible. It begs the question: how much incriminating evidence is necessary to arrest the internal destabilising agent in our country relied upon by U.S. imperialism? Guaidó’s signature on the contract which led to “Operation Gedeon” shows his willingness to undertake any bloody campaign to depose Maduro. Even if Guaidó chose not to take the operation to its extreme, let there be no doubt about the harmful role this individual plays in Venezuelan politics. We believe that Maduro’s government has refused to take legal action against Guaidó, not because of the latter’s support from the international community and the White House, but so as not to stymie the conditions for illusory negotiation with the imperialist powers that the government wishes to establish. Maduro’s constant and shameless appeals to Trump for dialogue, despite the fact that U.S. imperialism is ceaseless in its policy of economic suffocation and diplomatic and military siege, is simply a clear illustration of our point.

Considering all of the above, the government’s policy to appease the opposing classes are useless for and counterproductive to effectively defeating all the threats the country faces. In order to defeat reaction and imperialism decisively, we must destroy capitalism in our country. We must enact a socialist transformation of society immediately in the form of the expropriation of imperialist and national monopolies, estates and the banks, alongside the creation of a state monopoly on foreign trade under the democratic control of an organised working class. Nevertheless, we are aware of the fact that this can only be brought to fruition by an organic revolutionary alternative willing to break with capitalism permanently. The need for a workers’ government in light of the situation becomes ever more pertinent.

Arm and supply the Bolivarian Militia!

Send Guaidó and all those involved to jail!

Expropriate the imperialist monopolies and place them under the control of the workers!

Visit Lucha de Clases: the Venezuelan website of the IMT.