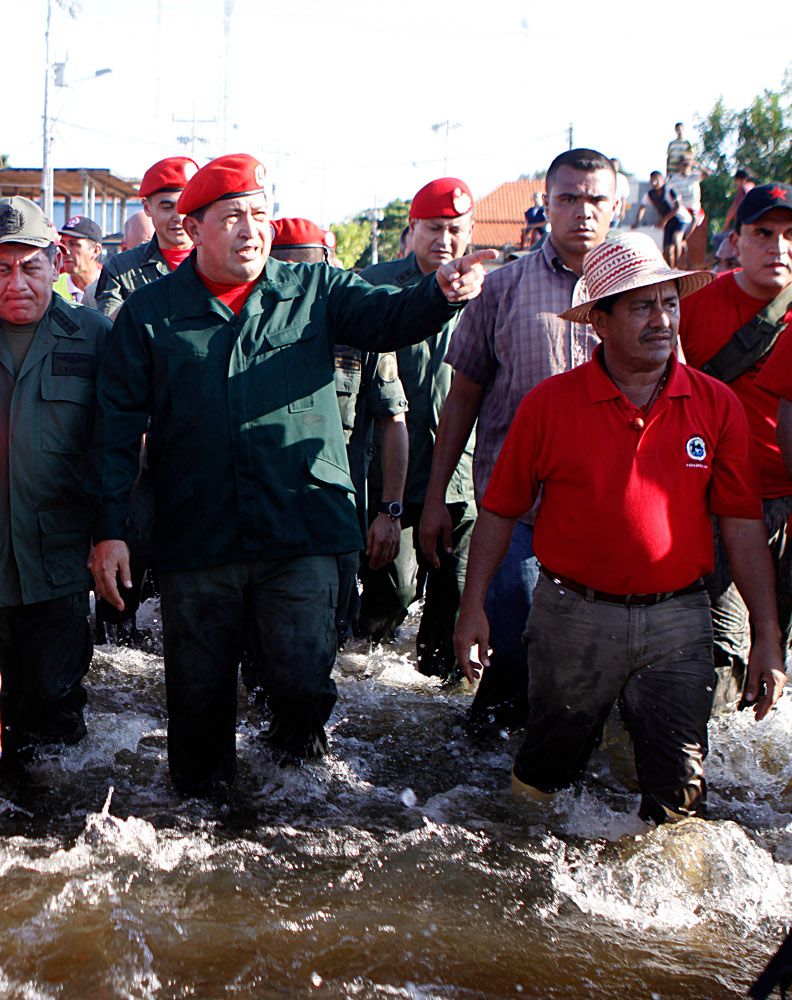 On Friday 10th of December, Venezuelan President Hugo Chávez publicly asked the PSUV deputies in the National Assembly to pass a new Enabling Law, giving him power to take rapid action, faced with the natural disaster caused by the heavy rainstorms, which have left around 100,000 Venezuelans homeless.

The new Enabling Law, which was passed by parliament on Friday 17th of December, gives Chávez mandate to legislate by decree for the next eighteen months in the following areas: Attention towards the human needs generated by the rainstorms, infrastructure, transports and public services, housing, finances and taxes, territorial order, integral development and the use of urban and rural lands, inhabitants security, national defensive, international cooperation and socio-economic system.

Chávez explained that this measure was not only a necessity because of the disastrous situation after the rainfalls, but he also stated that touhger measures are necessary to advance the revolution. In his weekly column, “Las líneas de Chávez”, the President explained:

“The Enabling Law is a necessary instrument faced with the challenges and the responsibilities that we have taken upon ourselves: It is not only about tackling the negative consequences of this prolonged period of rainfalls, it is also about responding to some of the structural problems, inserted in the Capitalist model, which have worsened the present crisis”. (Últimas Noticias, December 19, 2010).

The reaction of the Venezuelan oligarchy was furious. The headline of the infamous Tal Cual newspaper read “Towards a dictatorship”. Articles in El Universal compared Chávez to Hitler and Mussolini. The U.S. Imperialists are also very much concerned. State Department spokesman Philip Crowley told that the U.S. Government is “worried” about the new Enabling Law, as it allegedly “undermines the will of the Venezuelan people”. The international news agency Reuters said that “bankers and property-owners are bracing themselves for a new wave of nationalizations”.

Clearly, the bourgeoisie is worried. It fears losing its property and the privileges that follow with it. And their concerns are well founded. Chávez has already taken action against speculators in the housing sector, nationalising construction firms that were basically cheating people with loans and hollow promises for future homes.

Chávez also chose to take action against 47 landlords who own huge territories in southern part of the Maracaibo lake in South-western Venezuela. This is part of a new offensive in the Agrarian Reform, which so far has only succeeded in redistributing around 3 million hectares of land, much of it only being a formal recognition of already existing small-peasant property relations. Peasant organizations, like the Frente Nacional Campesino Ezequiel Zamora, have asked for an acceleration of the struggle against latifundia, in order to alleviate Venezuela's dependence on imported foodstuffs.

The new expropriations have met with the ferocious resistance on part of the landlords who set up road-blocks in the village of Santa Barbara. The riots are being backed by prominent opposition leaders such as MP Abelardo Díaz from the Social-Christian COPEI party who urged protesters to block the Pan-American motor-way, in order to “send a message to the president”.

Hermann Escarrá called for “an indefinite strike” and urged people to take to the streets to “show civil and military resistance”. Miguel Ángel Rodríguez, another opposition MP appealed for “a civilian uprising” against the new expropriations.

So far, there have only been minor clashes between the landlords and the National Guard and army soldiers, who Chávez have sent to the area to protect the newly confiscated expropriated land. But the opposition hysteria may escalate into new acts of sabotage and violence, repeating the failed “guarimbas” in 2003.

The opposition has called for a new march “in defence of private property” on January 23. They will do everything to rally the forces of reaction and also generate an environment of chaos and insecurity at all levels of society. The new parliament opens on January 5 and will surely be a focal point in their new strategy to put a halt to the revolution, combining legal and parliamentary means with illegal, violent and extra-parliamentary agitation.

Workers at Alven went on strike demanding decent wages and conditions on November 19 this year and blocked the gates of the factory. Faced with numerous violations of labour law on the part of the owner and to defend the workers’ jobs, the state decided to carry out a temporary intervention, which has now turned into an expropriation. Chavez explained that these are two factories were made bankrupt by capitalism and that they should be reactivated and integrated into a national programme of emergency house building (Sanitarios Maracay makes bathroom ceramics while Alven manufactures aluminium windows and doors).

As a matter of fact, the disaster, although caused by the heavy rains, was made worse by capitalism, which has forced hundreds of thousands to live in shacks and poorly built houses in unsafe areas on the hill sides of Caracas and other cities. It can only be solved through state intervention and the planning of the economy. All the different parts of the house building industry should be nationalised and put under workers’ control. Some of it has already been nationalised: Sidor and Sidetur which make steel bars and beams; the cement industry; Inaf, which makes plumbing supplies and now Sanitarios Maracay and Alven. However, the actual construction companies remain in private hands and are a sector known for mafia-type practices and corruption in getting contracts, etc. These should also be nationalised to serve the needs of the people and not private profit.

Seeing the problems that have emerged regarding bureaucracy and sabotage, for instance in the recently nationalised cement companies, workers’ control should be introduced across the production chain with elected representatives in each factory joining together in an industry wide workers’ council. This should join forces with representatives of the tenants’ organisations, communal councils, those affected by the rain and the national government in order to coordinate an emergency house building plan.

In order to provide the necessary finance, the banks and insurance companies should also be nationalised. All this could be easily carried out by using the new Enabling Law and making an appeal for the mobilisation of the working class, from the bottom up.

Revolution in the moment of definition

From a Marxist point of view, the new Enabling Law is a big step forward in the present situation. In several articles we explained that this would be a concrete way to implement thorough revolutionary change, taking concrete measures to complete the revolution. The Enabling Law effectively cuts across all the legal excuses of the reformists for not completing the revolution. This is precisely the reason why the Bolivarian masses support it, because they see it as a weapon in the class struggle. The Ezequiel Zamora National Peasant Front has already issued a statement giving it full support.

However, we must also point out that an Enabling Law in and of itself is not a guarantee for revolutionary change. In 2007, the year was opened with an Enabling Law, but this was not used sufficiently and, less than twelve months later, the opposition managed to win a narrow victory in the Referendum on the Constitutional Reform. If the new Enabling Act is not used to really challenge the Capitalist system, it will be a huge disappointment for the masses of workers, peasants and urban poor.

Chávez was completely right when he said that this was not just about repairing the damage caused by the natural disaster, but also about changing the system that worsened the effects of it. The truth of the matter is that the capitalists always enrich themselves from such crises, being able to sell products and raw material for the reconstruction of houses.

It is clear that the pressure from below has played a key role in Chávez making up his mind. He recently explained how he listened to the needs and grievances of the thousands of people living in the refugee-centres. Another factor has been the recent demonstrations of peasants and workers, demanding a radicalisation of the revolution.

The Enabling Law should be quickly put to use, for the purpose of nationalizing the banks, the industry, the food-production chain and the land, drawing up a Socialist plan for the reconstruction of houses and infrastructure. A state-monopoly on foreign trade would be necessary to avoid capital flight and a decree to legalize the factory committees and expanding workers' control would meet with an enthusiastic response from the working class, who would proceed to occupy the factories and stop the bosses' sabotage.