International Marxist Tendency
Share
Tweet
At two meetings of Alan Woods' speaking tour to launch Reformism or Revolution, 400 oil workers turn up in Monagas and Anzoategui, one in the San Tomé complex and the other in the Morichal Oil Field.

At two meetings of Alan Woods' speaking tour to launch Reformism or Revolution, 400 oil workers turn up in Monagas and Anzoategui, one in the San Tomé complex and the other in the Morichal Oil Field.

"US imperialism is bogged down in Irak and cannot invade Venezuela."

In the South of Anzoátegui there is the San Tomé oil field, one of the country's most important. A large part of the country's oil, 800,000 barrels a day, is produced in the East of Venezuela. Surrounding the oil field one can see the oil wells and the flames burning off the gas that comes out of the ground in the extraction of oil. 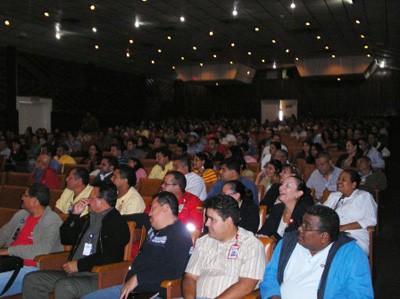 The meeting in San Tome started at 10am and was chaired by Orangel Lopez, planning manager of PDVSA Oriente and by Freddy Rojas, health and safety manager. There were around 250 oil workers in attendance who listened attentively to Alan's speech.

Alan started by talking about the crisis of US imperialism, pointing out that "all the perspectives of the ruling class after the collapse of Stalinism have been falsified". The prospects of development of the market economy, prosperity, economic growth, peace and democracy "have been demolished in just two decades", he said.

On the contrary, we have seen a massive increase in instability and militarism. For instance, Alan Woods pointed out that the "US spends 550 billion dollars a year in military spending".

"The reformists always have plenty of arguments against socialism. For instance they are always warning about the wolf. The imperialists will come! They will invade!" And with this they justify their attempt to prevent the revolution from going forward, said Alan.

There is no doubt that the US have formidable power. Alan gave the following facts: 40% of all military spending in the world is US, followed by the UK and France at 5% and Russia at 6%. "This is an extraordinary military power" said Alan.

But, "is it true to say that this power has no limits? There is a power greater than imperialism. A power that once it starts to move nothing on earth can stop it. Do you know what power? The power of the working class," said Alan to an ovation from the workers present at the meeting. 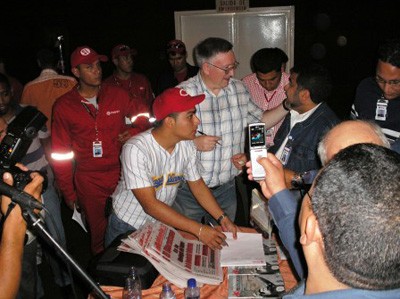 Alan pointed out that if in the epoch of Bolivar there had been people like Heinz Dieterich, faced with the enormous power of the Spaniards they would have shouted "We cannot struggle, the Spanish are too strong, they will smash us". "If he had followed this kind of advice you would still be under the domination of the Spanish," Alan replied to more applause.

US imperialism is bogged down in Iraq and for this reason it cannot invade Venezuela. The war in Iraq is costing them 2 billion dollars a week and this is a haemorrhage that no country can resist.

"Sooner or later they will have to leave Iraq with their tail between their legs. There is a growing malaise in the United States. Why did they vote for Obama? Many people are saying ‘we've had enough and we want change'."

The victory of Obama will not change anything, said Alan, "as the great American writer Gore Vidal ‑ and he knows the ruling class well ‑ once said, in the US there is one party of Capital with two right wings."

The discontent in the US is due to the economic situation in the country which is hitting the working class. "Today an industrial worker in the US produces a third more than what he did 10 years ago while his real wages have declined."

The meeting ended with the signing of books and an excellent sale of El Militante - the Marxist voice of the PSUV. Many comrades in the meeting were enthusiastic about the ideas of the IMT and several oil workers decided to establish closer links with the CMR.

"God preserve us from the advisors of president Chávez."

In the South of Monagas, an hour and a half from Maturin there is the Morichal Oil Field where comrade Alan Woods gave his last speech in Monagas before leaving for Puerto La Cruz. This was on Thursday, June 19, in front of an audience of over 100 people in the PDVSA building in Morichal. 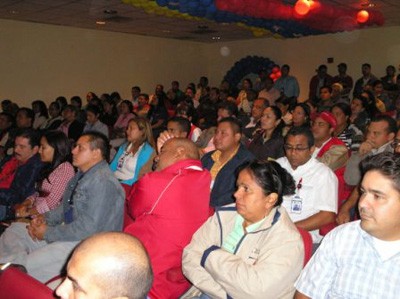 As in previous meetings, Alan warned that the revolution was at the crossroads and that there was an urgent need for a counter-offensive on the part of the rank and file against the bureaucracy and the reformists. "The socialist revolution means the control of industry, society and the State on the part of the working class!" he said. "When the oil lock-out of 2002-2003, who saved the revolution?" he asked, to which the audience replied "the working class!"

Alan stressed the need to spread workers' control to all industries and to expropriate the oligarchy. "We do not want to touch the property of 98% of Venezuelans, but the property of the 2% of wealthy individuals who make up the oligarchy, that must be taken over!" he said to loud applause.

"Sometimes we can make a mistake" he added, "we look at the tops to see what they are saying. But we must look down, to the masses, to the rank and file, which is the real motor force of the Socialist Revolution." [applause] 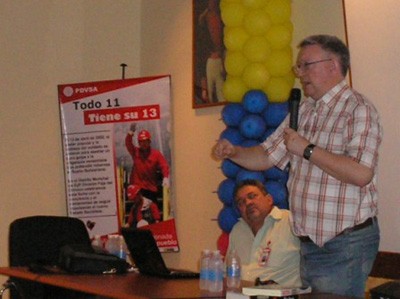 Arguing against legalistic arguments, Alan said "The revolution is not a game of chess with rules, or a baseball match with a referee. If one day the right wing comes back in this country, what do you think they will do? Do you think they will respect the law and the constitution? [shouts of NO!!], "No, they will abolish the constitution the day after and they will liquidate all the conquests of the last 10 years." [applause and shouts of "yes, that's true"].

Alan made an appeal to the workers to get organized in the struggle against the bureaucracy. "We are many, they are few" he said and appealed to those present to support and strengthen the Marxist Current. Afterwards, many workers, enthused by the meeting, bought the book, the paper El Militante and left contact details for the CMR.