Share
Tweet
May Day this year in Venezuela was characterised by the profound division between revolutionaries and counter-revolutionaries. While the CTV desperately tried to mobilise their supporters to show their hostility towards the Bolivarian government, the new revolutionary confederation of trade unions, the UNT, organised a massive rally of hundreds of thousands of workers and youth. 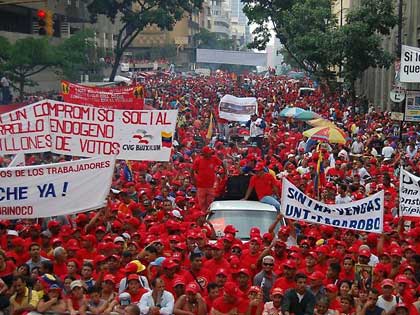 May Day this year in Venezuela was characterised by the profound division between revolutionaries and counter-revolutionaries. While the CTV, the pro-imperialist trade union confederation, desperately tried to mobilise their supporters to show their hostility towards the Bolivarian government of Hugo Chavez, the new revolutionary confederation of trade unions, the UNT, organised a massive rally of hundreds of thousands of workers and youth.

Marching along the Urdaneta Avenue, the procession crossed the Puente de Llaguno, the famous bridge that was the setting for the manipulated videos the opposition used as a pretext for the April 2002 coup. The demonstration was filled with banners from the different sectors of the working class and local trade union branches.

While May Day 2005 took place in the context of a wave of nationalisations with Inveval and Invepal at the center, this May Day was surrounded by the recent intrigues and provocations of US Imperialism against Venezuela. Since the parliamentary elections in December last year US officials have increased their attacks against Venezuela. Condoleezza Rice has stated that Chavez is a “destabilising” factor in Latin America and Donald Rumsfeld even went so far as to compare Chavez openly to Hitler. The US has also sent around 6,000 soldiers to the Caribbean to perform military exercises, obviously a warning to Venezuela and Cuba (see US launches major military exercises in the Caribbean as a warning to Venezuela and Cuba).

The Venezuelan government approved two new labour laws to celebrate May Day. One of these is a decree on solvencia laboral, which forces enterprises and firms cooperating with the state, using state funds or with state contracts to respect the basic labour laws of the country and guarantee the right to free trade unions, the right of the workers to organise, etc. If these rights are violated labour inspectors can legally punish these firms and enterprises.

While this reform is certainly a big step forward, the main problem is that the old bourgeois state is still in place. This law does not give the right of inspection to the revolutionary trade unions. To really make such laws effective it is necessary to destroy the bourgeois state apparatus and lay the foundations of a workers’ state by applying the principles Lenin set out in his book, The State and Revolution.

The other law passed raises the minimum wage by 10% and decrees that employers must pay postponed or unpaid wages to their employees. Other regulations, including bigger bonuses for work on Sundays and holidays, were also passed.

Numerous trade unions and local Bolivarian groups were present at the big revolutionary march in Caracas. It is necessary to emphasize the various groups of workers who marched together under the banner of FRETECO - The Revolutionary Front of Workers in Factories Occupied or under Cogestión (see http://freteco.elmilitante.org). Workers from Inveval and Invepal Morón, sacked employees of Invepal Maracay and workers of Tomatera Caigua were among those who formed the contingent with banners and t-shirts carrying slogans promoting the struggle for nationalisation and workers’ control. Other important trade union leaders such as Luis Primo participated in this bloc of the demonstration.

Around 10,000 FRETECO leaflets were handed out, explaining that it is necessary for the UNT to elaborate a plan for the taking over and nationalisation of factories under workers’ control, aimed at a fundamental change in the relations of production, the socialisation of the main levers of the economy and transformation of society along socialist lines.

The workers were extremely enthusiastic, chanting slogans in favour of socialism, for the 10 million votes for Chavez campaign and for the implementation of a regime of workers’ democracy in Venezuela. One of the banners in the bloc, brought by the comrades from Inveval, carried the slogan “factory taken over, factory expropriated”.

The UNT will hold its congress on May 27. This will be an important event for the revolutionary process in Venezuela. Worker activists of FRETECO will be intervening in this meeting putting forward the case of the occupied factories and appealing for a national campaign.

The May Day demonstration once again demonstrated the favourable situation that exists in Venezuela. The true correlation of forces has been revealed. The opposition is weak and the revolutionary forces are very strong. Now is the time to push the workers’ struggles forward and unite them on a national scale.