Share
Tweet
On Tuesday, December 16, a delegation of fifteen workers from the CMR (Revolutionary Marxist Current) and FRETECO, visited the SIDOR steel factory in Guayana, state of Bolívar, Venezuela. The visit was a spectacular success and marks yet another milestone in the growing influence of the CMR in the Venezuelan workers movement. 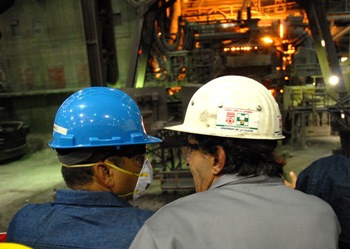 On Tuesday, December 16, a delegation of fifteen workers from the CMR (Revolutionary Marxist Current) and FRETECO, visited the SIDOR steel factory in Guayana, state of Bolívar, Venezuela.

The comrades had been invited officially by the SUTISS, the trade union of the Sidor workers. SUTISS has around 4.500 members and is one of the strongest trade unions in Venezuela. The leadership of the union has recently been replaced. In September the trade union tendency Movimieno Revolucionario de Orinoco (list 11) won a surprising victory in the SUTISS union elections. This showed that many workers were discontent with the old trade union leadership. The new SUTISS president, José Luis Hernandez has stated that he wants a new type of trade unionism that approaches more directly the workers and their daily problems.

The purpose of the visit was to discuss the question of unity, equality and socialism in the workers movement. Among the visitors were important trade-union leaders such as Félix Martinez, General Secretary of the union of Mitshubitshi workers in Barcelona (Anzoategui state), Yeant Sabino, General Secretary of the union of workers at Vivex (a factory in Barcelona that is occupied by the workers), Luis Primo, Regional co-ordinator of the UNT in Caracas-Miranda, Nelson Rodríguez, member of the Factory Council of the Inveval factory and José Padron from CANTV in Valencia, accompanied by two other union activists from CANTV Carabobo. 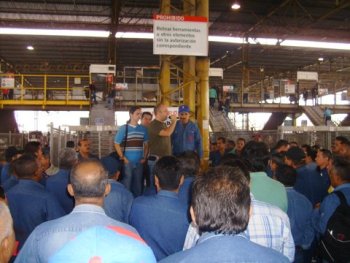 Also present were national leaders of the CMR, such as Leonardo Badell and Carlos Rodriguez, and two activists of the PSUV Youth (J-PSUV) from Caracas plus a comrade representing the Spanish School Students Union (Sindicato de Estudiantes).

The activities began at 6.30 in the morning, when three of the comrades intervened at the factory gate number 3. SIDOR is a huge plant, which has a total of some 15.000 employees (workers, sub-contracted workers, funcionaries and management) and therefore has several entrances to the plant. To gate 3, tens of buses arrive loaded with workers who are ready to enter the factory. But before the entrance, the SUTISS union has the right to call the buses to a halt and organise an assembly with speeches.

Our speeches were mainly focused on the need to crush the economic power of the bourgoisie and nationalize the land, the industry and the banks, in order to complete the Socialist Rvolution. In opposition to the arguments of the reformists, we stressed that it was the masses who had moved again and again to defend the revolution. 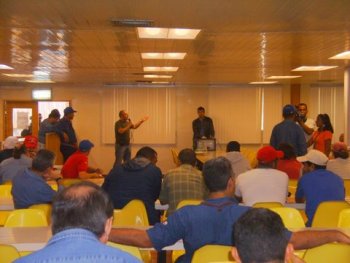 Around 100 workers followed the lunch-time meeting in the canteen of the steel plant.

When the other comrades in the CMR/FRETECO delegation arrived at 9 am, we had breakfeast with the SUTISS executive committee members and with members of the Revolutionary Front of Steel-workers, who also had helped to organise the visit. The comrades of the Front are very interested in the ideas of the CMR and has agreed to begin to sell 50 copies of each new issue of the paper El Militante.

At 11 am we went to one of the cantines, where the workers have their lunch. Here we set up a speakers platform, and a conference of one hour began. Around 100 workers followed the conference. We also set up a stall with Marxist books and material for which the workers showed a lot of interest.

After a short introduction by José Luis Hernández, president of SUTISS, the conference was kicked off by Félix Martinez, general secretary of the union at Mitsubishi and regional leader of the UNT in Anzoategui. Félix explained the struggle to transform the trade-unions, from having a reformist outlook to become a revolutionary tool in service of the interests of the working class. He emphasized that the kind of trade-unionism that doesn't go beyond the immeadeate bread-and-butter demands, will never be revolutionary. The workers need a political trade-union, which combines the daily demands of the workers with the struggle for Socialism.

Another remarkable speech was delivered by Yeant Sabino, the general secretary of the union at Vivex. Vivex is a factory of some 350 workers, which produces windscreens for the car-industry. It has recently been occupied by the workers who are now demanding its expropriation and nationalization by the government, under workers control. He explained the struggle of the Vivex workers and appealed for solidarity. He stressed that the main problem was the sabotage of the bosses and ended by saying

”The main slogan of the workers movement at this point in time, should be 'Factory closed by the bosses – factory occupied and taken over by the workers!' ”. The slogan found an echo in the hall and it raised the enthusiasm of the workers.

Then Luis Primo, a well-known national leader of the UNT, adressed the workers. He stressed that the SIDOR workers had given a marvellous example to the working class this year. It was a long and hard struggle, lasting nearly a year, but in the end it paid off with the nationalization of SIDOR by Chávez in April.

”You are the vanguard of the revolutionary workers' movement. While all others stood by the sidelines and were incapeable of resolving the conflict, you fought for your rights and gave a militant example of the courage and persistence needed to win. This is what is needed, if the working class is to play a decisive role in the building of Socialism.” 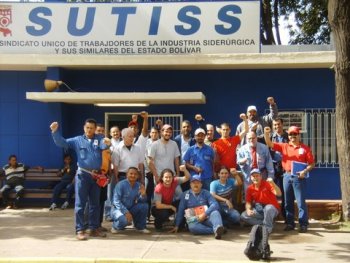 The SUTISS leaders were very enthusiastic about the visit and the ideas put forward by the delegation.

Nelson Rodriguez from the Inveval factory council was the next speaker. He outlined the experience of Inveval, nationalized in 2005 and run under workers' control since. According to Nelson, workers control is necessary, if we are to truly use the productive forces in the service of the people. ”The workers must open the company's books and reveal the figures. Thereby they can understand the production costs and the benefits and in this way they can decide where the resources should go”.

José Padron from CANTV Carabobo followed. CANTV is the national telecommunications company, which was nationalized in January 2007. However, according to José Padron, the workers are still struggling for the right to collective bargaining and they are demanding that workers control should be implented in the company.

Héctor Guerra, on part of the Revolutionary Front of Steel Workers, also inervened in the conference. He asked for solidarity with the workers at the Vivex factory and also appellead for the workers to protest strongly against the recent killings of 3 trade-union leaders of the UNT in Aragua.

After the conference we were taken to the SUTISS union offices where we were shown the installations. The SUTISS leaders were very enthusiastic about the visit and the ideas and slogans promoted by the comrades. They agreed to continue collaboration and they also bought a bunch of Marxist books and material, which will now be at sale at the SUTISS headquarters and thus available to every worker at the factory. 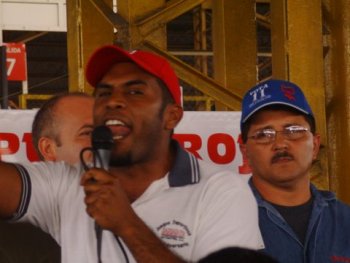 Félix Martinez spoke in the afternoon to an assembly of 500, arguing that the workers had to put themselves at the head of the revolution.

As a closing ceremony we were taken back to the factory gates of SIDOR, where another assembly was held at 2.30 pm. At this assembly, more than 500 workers listened attentively to the speeches. José Luis Hernandez invited Félix Martinez and Carlos Rodriguez to speak to the workers in the name of the whole delegation.

Félix gave a powerful speech where he stressed the duty that the workers have is to organize and put themselves at the head of the revolution. ”Some say that the working class has a low level of counsciousness. But if that was true, then we would not have had such a marvellous struggle as your struggle here in SIDOR”. He repeated the slogan; 'Factory closed by the bosses – factory occupied and taken over by the workers!', which caused a thundering applause among the workers present.

Carlos Rodriguez also gave a short sum-up speech in which he explained the political context: ”Yes, we need to vote in favour of the amendment to the constitution promoted by Chávez but this is not enough on its own. At the same time we must complete the revolution. That includes two tasks: 1) expropriate the main levers of the economy (the land, the banks and the industry), nationalize them and put them under workers control and 2) destroy the old state-machinery of the bourgeoisie and replace it with a revolutionary workers' state.” Again, this idea connected brilliantly with the mass of workers.

After these two speeches, José Luis Hernández ended the meeting by saying, ”These are fresh Marxist comrades. We thank the tendency that was here today. We agree with theese ideas and it is these that need to be applied in the struggle for the HCM [health insurance], the pensions and all the rest of our demands”.

This visit was a direct result of the enthusiasm which the recent CMR trade union conference in Caracas had provoked among the two SIDOR workers who participated at that event. Inspired by the workers of the CMR, these two SIDOR comrades organized the visit in order to promote Marxist ideas in SIDOR.

All in all, this was a spectacular success and marks yet another milestone in the growing influence of the CMR in the Venezuelan workers movement.